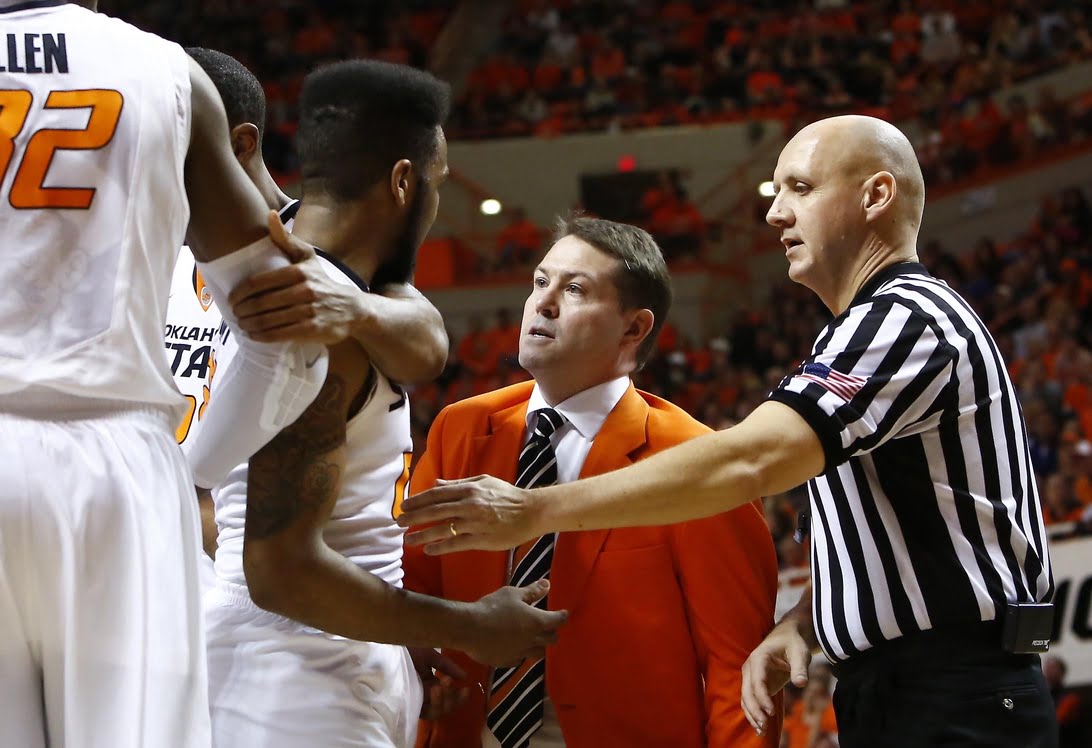 Travis Ford was not pleased on Saturday night. (USATSI)

After Oklahoma State jumped out to a 22-10 lead in the first half of Saturday night’s Bedlam game I certainly didn’t foresee writing this post.

A last-second buzzer-beating three from Buddy Hield? Maybe. A hang-on-to-your-Mo-Baker-throwback-jersey W from OSU as the Sooners surged? Sure.

But an absolutely dominant second half from OU that turned a game OSU controlled into a game in which it had no chance no matter what the scoreboard said? No.

Yet that’s what happened in GIA on Saturday as OU won 64-56 and OSU dropped to 4-5 in conference play with the conference slate halfway over.

Going from 4:32 in the first half to 6:42 in the second (17:50 total) with five made field goals will do that. Le’Bryan Nash scoring 12 points will do that. Michael Cobbins fouling out with four minutes left in the game will do that.

Forte and Nash combining for nine field goals and nine turnovers will do that.

Going 4/19 from the 3-point line will definitely do that.

It was a game OSU looked like it was going to win, looked like it could have won and then just didn’t. OU was better — way better in the second half (outscored OSU 39-24) — and hit its free throws down the stretch on the back of a few interesting calls.

Phil Forte and Anthony Hickey were the only “bright spots” for OSU as Forte had 15 points and got to the foul line eight times and Hickey had an absurd 10-8-1-3-1 line.

Hickey was also 2/9 from 3 and OU sewed Forte up in the second half forcing somebody else — really, any other human — to beat them.

Nash sort of tried to take over (like I sort of offer to change diapers in the middle of the night) but everything else came up empty.

It was a frustrating night because it really felt like GIA was pumping some heat at start of the game. OSU hit some 3s, showed intensity and raced to a lead.

Then it just got manhandled.

Part of that is Nash removing himself from the first half of games (tonight on account of fouls) and part of it is the lack of a supporting cast.

But you know what most of it is? OU is just a better, more athletic team that made adjustments (or at least inspired its players) at halftime.

That’s tough to swallow as an OSU fan but it’s reality.

Ryan Spangler (God bless his tattoos) and TaShawn Thomas are better than Michael Cobbins and PLAYER X. Jeff Newberry can only hold Buddy Hield so long. Jordan Woodard at the very least cancels out Hickey.

So when you have an opposing coach that can take Forte and Nash out of it (and really it doesn’t take much with the latter), that’s it.

The ray of hope in all of this is that OSU’s magic number in conference play is probably just four more wins. If you go 8-10 in this year’s Big 12 with some halfway decent non-con wins (uhh Oregon State?) you can likely get in the tournament.

Plus you still have three games against TCU and Texas Tech.

There’s no reason to throw in the towel on this year’s team or this season yet no matter how discouraging Saturday’s outcome was.

That’s not to say the trajectory of the program is ideal (it certainly is not) but those types of things can be discussed in April, not at the beginning of February.

In a college basketball world filled with parity in which no team is going to willingly fire its head coach in February[1. Please stop with the #FireFord stuff midseason.] all OSU fans can do is will their team towards the NCAA Tournament…and pray.

• I thought Newberry was tremendous on Hield in the first half. Not so much in the second. Related: OSU’s defensive intensity ebbs and flows so much Boone is probably making a small to medium-sized fortune short-selling it.

• The concept isn’t difficult, people. Shoot 33 percent or better from the 3-point line and you win all your non-Iowa State games (I don’t know why that North Texas game has a “L” next to it, that was a “W”).

Shoot worse than 33 percent and you lose all of them (except Prairie View). Tonight? 21 percent. 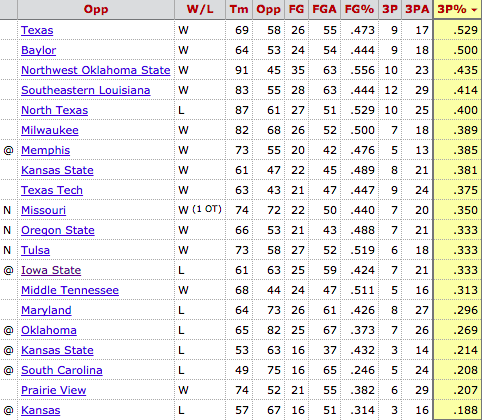 OSU IS down six with 2:31 left. But Tyreek Hill isn't on Ford's bench.

• Why does Mitch (can I call him Mitch?) always try to make put-backs when he’s in the air like he’s one of us playing 21 in his driveway? He’s not THAT athletic.

• I was thinking about this during the second half: Who would you pick to be mic’d up for a game if you could only pick one person from this game?

I think I’d go Forte. He wouldn’t say anything the entire game but you’d get a random super condescending remark towards Buddy about his shooting with some random expletives. It would be tremendous.

• Where was Carroll? Is he still on the team?

• I love the End DUIs advertisement on the beam behind the goal on either end. I think the lesson there is if somebody shoots and hits that beam they should definitely not drive home.

• Speaking of Mitch, he basically spent the second half by himself since Nash was double-teamed the entire time. He was more open than Shortcakes at 4 a.m. (Shortcakes is still there, right?)

• We don’t skip pass enough. Somebody (Nash?) hit Tavarius Shine with a sweet one tonight and Shine nailed the 3.

• He certainly earns them but Nash gets some of the most egregious calls I’ve ever seen. This is horrific. Of course, maybe if he didn’t spend the first 37 minutes looking at the refs like Marshawn Lynch looks at reporters he’d get a call or two.

• I wish I would have tweeted it because you won’t believe me but I knew Hickey was going to get a palming violation at some point. I was drinking full cups of coffee between his dribbles.

• I (sports) hate him but Buddy Hield is fun as hield. He was a monstrosity in the second half.

• Has Cobbins ever successfully completed a pick and roll?

• Cobbins’ shoes almost blinded me tonight. Like if you took the shirts Nadal and Fed were wearing in the Australian Open and made them orange. Or did Ford cut a swath from the back of his blazer and just tape it on there?

• The Big 12 is so soft in general. Cobbins would have had like two fouls if this was a Big 8 game but he fouled out with four minutes left.

• I loved the high step from the big man.

I feel like you could play some sort of Bingo with the letters on the GIA floor when Forte shoots.

Next game: at Texas on Wednesday night.