Really easy actually, but they didn’t.

Yes, OSU got beat by 15 in today Lawrence and no, it wasn’t pretty for the first 20 minutes, but this team revealed itself in the second period and I liked what I saw.

This is not the same squad that bowed out early against Baylor in Waco three weeks ago. Not even close.

Kansas closed the first half on a 35-11 run but the Cowboys opened it back up in the second frame and actually outscored KU 42 to 30. And they didn’t even shoot well.

It wasn’t even about the score so much though. They controlled the tempo, played doggedly on defense, ran an effective press (Tyshawn Taylor:presses as Bobby Reid:secondaries), and kept going at a team that had hit them in the mouth earlier in the game.

Markel continued his impressive second half of the season with a 21-3-2-2 line and Keiton, Williams, and Nash all pumped in double figures.

The biggest issue was (is?) that OSU just couldn’t hand in the paint. Kansas outrebounded them 48-19 (not a misprint!) and at one point had a 40-4 (!) points in the paint advantage.

12 more thoughts from the game in Lawrence…

1. The freshmen were baptized into Allen Fieldhouse in the first half. It’s one of the nastiest places in the country to play (did you hear the “they haven’t had a senior class that’s won fewer than 100 games in the last 25 years” stat?) but it will serve this squad well next year and the one after. They’re going to be seasoned and we’re going to be glad it happened.

2. The standard for technicals in this league is a joke. At one point in the first half, Thomas Robinson dunked, nearly stepped on Cobbins’ head, stared at him, and swagged his way back down the court. No call. If Markel had done that? See you in 2013, young fella.

4. Text of the game: “uhh, that three from Robinson was just a huge ‘F you’ to our fan base.” Pretty much.

6. We had a “where will Cezar transfer to” poll going on the live chat during the game today (I think “the YMCA team Eduardo Najera sponsors” won out)…if that tells you anything about his season.

7. When Jeff Withey is significantly stronger than you (Soucek) and can inflict his superior muscular fortitude upon you (Soucek)…it’s probably time to get in the weight room.

8. Comment of the game in our chat: “I feel dumb for looking forward to this game.”

9. Those KU throwbacks are one of the coolest things Adidas has ever done…not that that’s saying much. A lot of people asked me what #1 is. It’s this, and it’s not close.

10. It’s hard for me to overstate how different this OSU team is than it was three or four weeks ago. The stable is not full right now, but when it is Ford and Co. will be ready to let it ride.

11. OSU missed a ton of threes in the second half. If they’d hit, say, three more before about the 5-minute mark the game would have been in single digits and things could have gotten interesting. 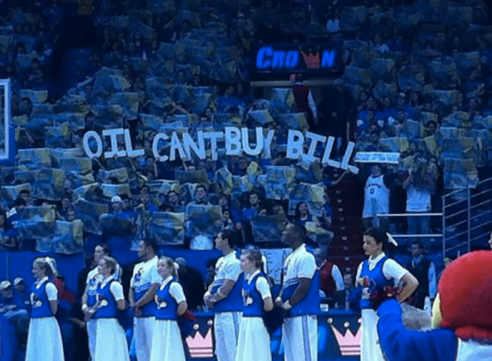 The response was even better though..

Next game: at Mizzou on Wednesday