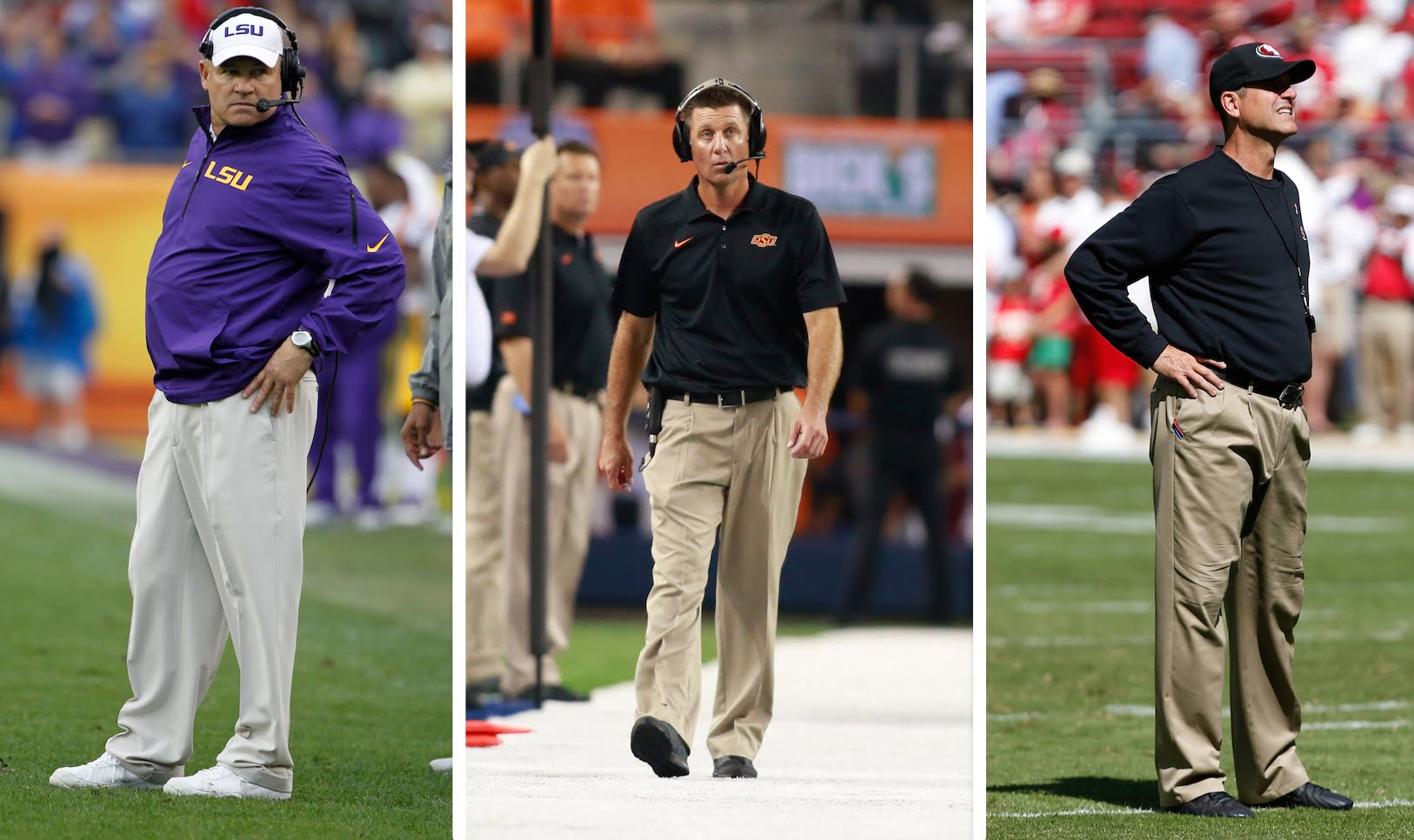 I posted an article in the Bullets this morning that casually mentioned the “Jim Harbaugh to Kansas” rumor and why it was ridiculous.

It is ridiculous but I started digging a little deeper and found a couple of things. All of this originated from a post Travis Haney wrote for ESPN about who should replace Brady Hoke when he’s fired from Michigan.

That Michigan domino is large and important and I think Jim Harbaugh holds it but here’s what Haney said about it:

When the time comes, LSU coach Les Miles — not Jim Harbaugh, or anyone else — should be the first and only call. For one, Miles is established enough that he wouldn’t feel unsettled if an AD were named after his hiring. He wouldn’t feel pressure from that office the way others might.

Is that a move Les Miles would make? Maybe, the SEC West is a bloodbath, and you know he would delight in running the football 50x a game on freezing cold Ann Arbor days.

So if that happens, then what?

If [Harbaugh] does leave for a college gig, those close to Harbaugh told an ESPN colleague that it would be for Kansas. Yes, Kansas.

The last time the KU job was open, Harbaugh strongly considered leaving Stanford for Lawrence. So some believe the embattled Niners coach would again kick it around.

Harbaugh’s wife is from Kansas City and, evidently, the man has great affinity for the Sunflower State.

If Miles goes to Michigan, it creates another high-profile opening. LSU went to Oklahoma State for a coach the last time, and it worked. Why not again?

“Everyone knows he and [AD Mike] Holder aren’t on the same page,” a Power 5 head coach said. “If Michigan or Florida open and they call, he’d go.”

Is that a real possibility? Who knows — but I do believe Bob Stoops’ 10-year rule that things get a little stale after a decade in one place, that maybe it’s time to shake things up.

OSU has been transformed from “little engine that could” to “legitimate top 20 team every year” and in doing so it has sort of morphed into this program that is a replica of a lot of other top programs. It’s less OSU-y than it used to be in a lot of ways — I mean, you saw that crowd on Saturday, right?

Now, this is mostly a good thing — a great thing, really — and not something I would trade for any number of 6-6 seasons, but I wonder if it factors in. Gundy mentioned it after the Iowa State game.

I wouldn’t think so but the terror of the thought is enough to make my palms sweaty.