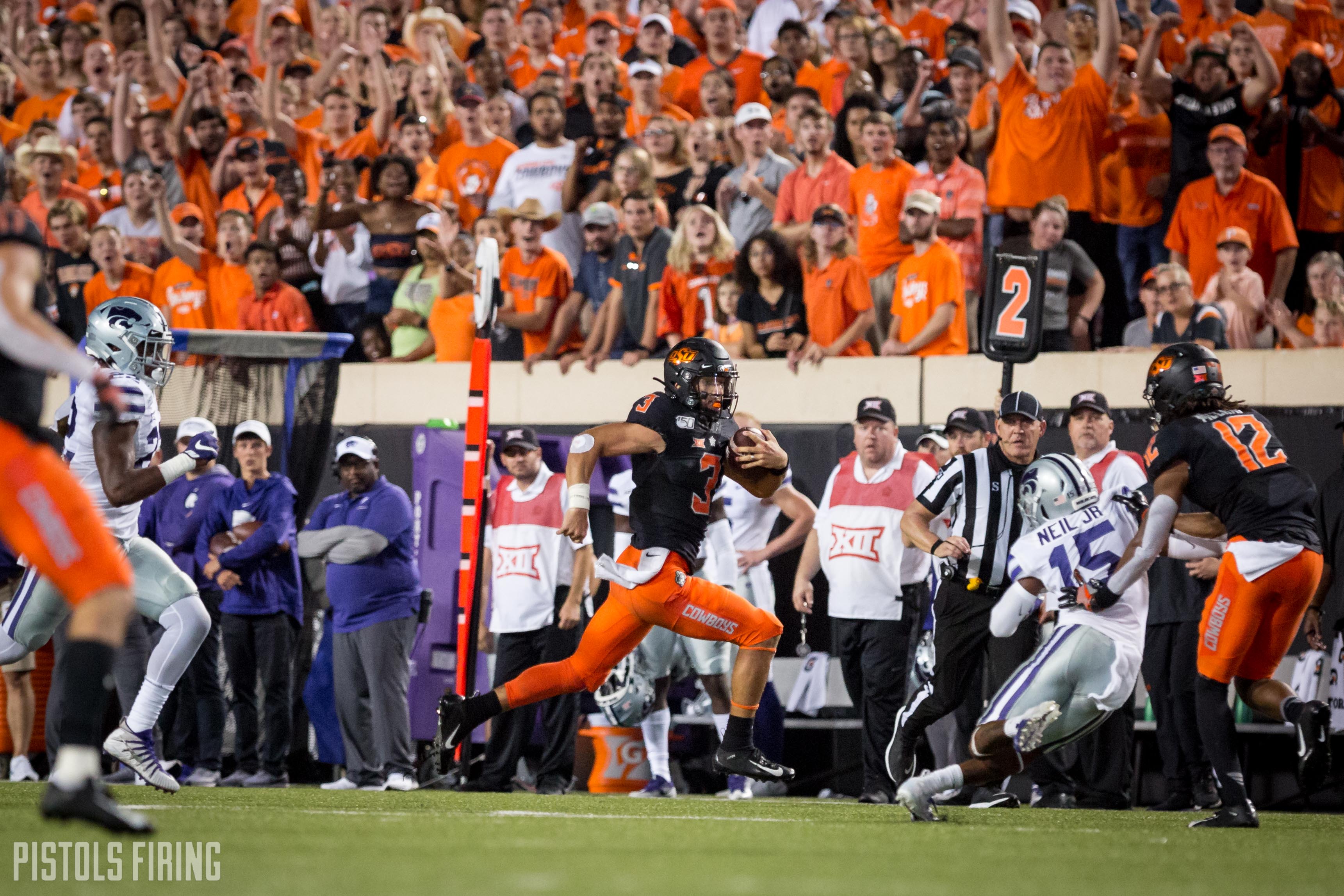 It wasn’t always pretty, but Oklahoma State moved to 1-1 in Big 12 play after handling unbeaten and No. 24 Kansas State 26-13 despite a one-hour weather delay and a two-interception performance by its QB.

There is a lot to digest from Saturday night, but here are the three main things I picked up from the win.

You’ll notice I didn’t say “legit” but if OSU can perform somewhere in that ballpark for the rest of the season, it should give its offense some extra cushion while Spencer and Co. continue to feel things out.

I know it was against a mostly untested K-State offense, but Jim Knowles’ group basically shut down a Big 12 offense allowing a somewhat comfortable win despite OSU losing the turnover battle and being pretty ineffective in the red zone.

K-State may not be known as an offensive juggernaut, but it’s historically had little trouble putting up big numbers on OSU. Coming into Saturday night, Kansas State averaged 36 points per game in 11 matchups with Gundy-coached OSU teams. The 13 points it was held to is the lowest KSU scoring output in the two teams’s series in nearly 20 tries. You have to go all the way back to 1992 for a lower outing when KSU beat OSU 10-0.

We’ll see how the defense looks in mid November, but as of right now it’s shown improvement and reason for optimism through five games.

Okay, we already knew Chuba was a legit Big 12 running back in 2019. We probably knew more than that. But now he’s in rarified air not just in the NCAA in 2019, but as a Cowboy running back in the history books.

Among his many early-season milestones, Chuba is the first Cowboy to hit 200 rushing yards three times in the first five games of the season and the first player to do that since Leonard Fournette for years ago.

His 296 yards last night were the most by a Poke against a ranked team, ever. More than Barry, more than Thurman. Who knows how sustainable his workload is moving forward, but he’s on pace to turn in a season that will drama even more comparisons to the greats.

A quick glance at his stat lines so far this year might lead one to a disturbing conclusion about Spencer Sanders. In his first two games this year, Sanders threw six touchdowns and zero interceptions while completing 74 percent of his attempts. In the three games since he has just two passing TDs to five interceptions and is completing just under 60 percent of throws.

But I’m not ready to hit the panic button just yet, and here’s why. Most of Sanders’ issues have been when he tries to do too much which is not uncommon among young QBs, especially those with “gunslinger” mentality. We saw it some with Mason Rudolph.

“(Sanders is) trying to make a play every time,” said Gundy after the game. “Sometimes it’s OK to run it or throw it out of bounds. But he does have a very live arm, and he can whip it fast on the run. That’s a weapon for us when he’s out on the move.”

Sanders is still feeling his way through this college QB thing. Fortunately he has a stud running back to help buoy the offense and, at least this week, a defense that can take some of the load while he continues to develop.

He was never going to be a finished product by Game 5 — and he won’t be one by Game 13 — but we’ve seen the flashes of talent in the 60-yard bombs and the tantalizing scrambles to know that if he and when he gets close to his ceiling, the sky will be the limit for OSU.