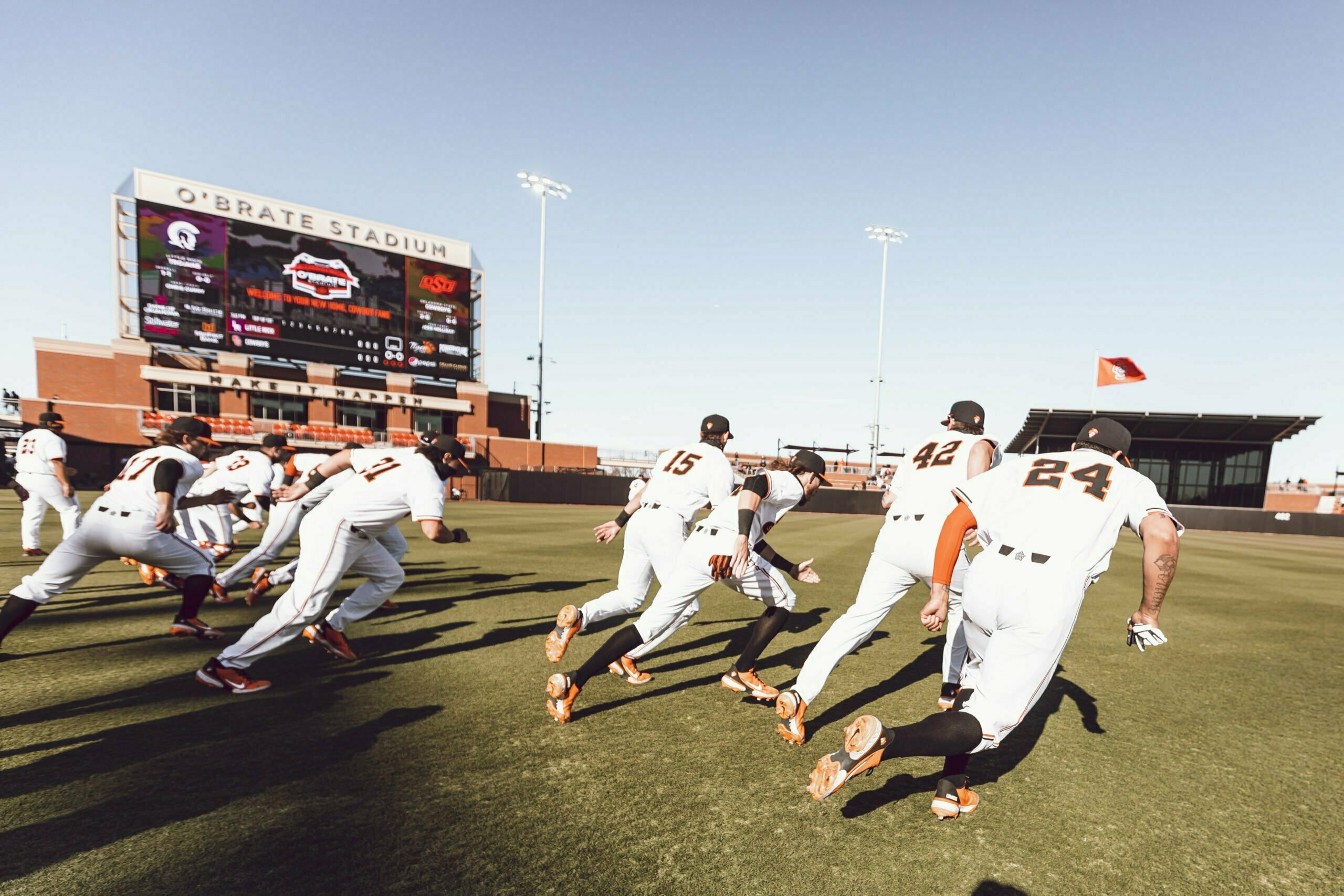 After many delays to O’Brate Stadium’s Opening Day, it finally came.

Oklahoma State defeated Little Rock 7-2 on Wednesday in the $60 million stadium. The win advanced the Cowboys’ to 3-0, but it did so much more for the program and the university. Here are three takeaways from Opening Day.

1. What a Beautiful Ballpark

O’Brate was well worth the wait.

There isn’t a bad angle of the ballpark. Nothing seems out of place. The concourse, the press box, the layout, the different seating arrangements, it’s all beautiful.

It has the feel of a professional ballpark, but it’s smaller. And it being smaller is a good thing, I think. It feels like some sort of baseball oasis in rural, north-central Oklahoma, a field of dreams of sorts.

2. All of the Firsts

A lot of firsts happened Wednesday night and many more will come.

Justin Campbell struck out the first batter in O’Brate Stadium. OSU’s first batter, Matt Golda, got hit in the head with a pitch. Alix Garcia scored the first run and hit the first home run (on different instances). Cade Cabbiness had the first hit.

“I definitely didn’t think it was gonna be me [hitting the first home run],” Garcia said. “We have a pretty stacked lineup, but I don’t know. It was kind of tough. I kind of blacked out a little bit running around the bases. I was not expecting to do it, so it was just a big surprise.”

Those are the simple firsts, but I look forward to the other firsts.

There is a small fence down the left-field line. At some point, a ball is going to land fair and make it next to that fence and a fan is going to reach over and grab the ball and cause some chaos.

The windows in the press box can open, and the net behind home plate doesn’t go high enough to cover it. At some point, a ball is going to hop that net and make it into the press box. Will it smash a laptop? Will the reporters try to catch it or tower in fear? A ball hit the closed window Wednesday.

Baseball is unique in that its ballparks are unique. It isn’t like football with 100-yard fields or basketball with a 94-foot court. The playing surface interacts with the game more, and it’s exciting to see all of the interactions this stadium can and will provide.

Josh Holliday’s squad has handled its first three games of the year seemingly with ease.

The Cowboys scored enough runs to win the game in the second inning, putting up a five-piece.

The Cowboys’ rally started with Garcia drawing a one-out walk. Cabbiness then hit the first hit and extra-base hit in the stadium’s existence when he doubled to left-center. Houston Morrill singled through the left side to score Garcia.

With runners on first and third Matt Golda laid down an ugly sac bunt that turned into a pretty one when Little Rock pitcher Erik McKnight made an errant throw to first. Cabbiness scored, Morrill got to third and Golda ended up on second.

Caeden Trenkle then hit an infield single to second base that took a funky hop off the mound. Morrill scored, and Golda advanced to third. Jake Thompson then singled to left-center, scoring Golda, before Nolan McLean singled through the left side scoring Trenkle.

Garcia’s home run came in the fifth. McLean scored OSU’s other run off a wild pitch in the sixth.

Justin Campbell started on the mound for the Pokes. He struck out the first side of batters he faced in O’Brate Stadium. Through two innings he had five Ks.

Campbell threw four innings where he allowed a run on two hits while striking out six.

Wyatt Cheney, John Kelly, Colton Bowman and Brett Standlee combined for the remaining five innings in relieve. OSU’s bullpen gave up a run on two hits while striking out eight and walking one.

“My first thought is, very glad it was a victory,” Holliday said. “It’s important to not only open the stadium but establish a presence. To win the first game here, it meant a lot. It was important, not going to shy away from how meaningful that is. Secondly, I was pleased with how we played, good pitching, some really good infield defense, obviously we have a big inning. The five-spot was good.

“We were on the verge in some other innings of maybe opening that thing up. We were one swing away from putting a pretty big gap between us, but Little Rock has some good arms, some good athletes. They gave us some really good looks, some lefties on the mound that we needed to see that will make us better as we go. I thought it was a well played game, tremendous crowd and just a lot of firsts. A day that I’ll never forget.”