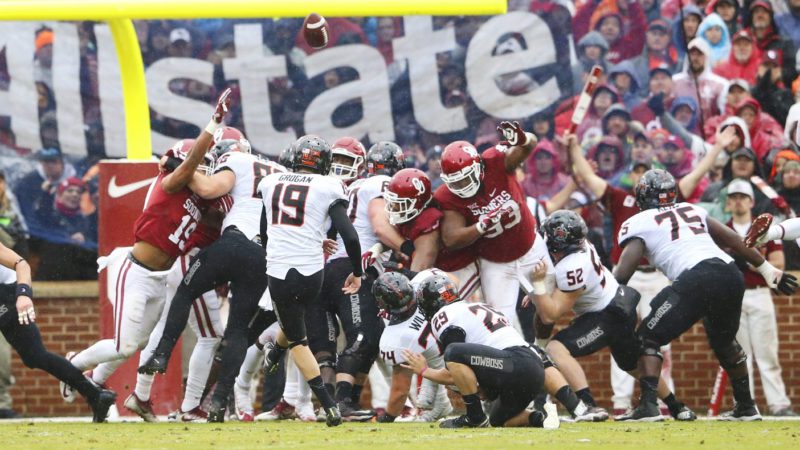 If I may, allow me to play devil’s advocate here. I’m not excusing anything so don’t skip down to the comment section before you read what I have to say.

First off, I was not at all happy with Mike Gundy’s choice to kick a field goal on fourth-down in the fourth quarter. I think I made that pretty clear on Saturday.

We know Gundy tends to coach conservatively, especially in big games *ahem, against OU*. This particular game presented a culmination of frustratingly conservative calls that boiled over for Cowboys fans with just about ten minutes left on the clock.

At this point in the game, the Cowboys were down 31-20 with just under 10 minutes remaining. A questionable sequence earlier in the drive saw Gundy wait through an official review, trot out his punt team and then have to call a timeout just to get his offense back on the field.

The Cowboys did get the first down and trucked it pretty well down the field. Then, on third-down-and-1o, on the Sooners’ 29-yard line, they chose to hand the ball off to Chris Carson. The play call was again a bit of a head-scratcher, but Carson made a play and picked up eight yards.

Instead of going for it on fourth down with two yards to go, Mike Gundy sends out his field-goal team.

A white flag? Not quite. Let’s look at the facts.

This is the same Ben Grogan that had come up big for the Cowboys in the past. Multiple game-winners including one on the very same field two years prior.

If Grogan makes it, the Cowboys are down one score (eight) with 9:49 remaining. Not exactly taking a knee.

I know you think I’m glossing over the fact that Joe Mixon went house on Oklahoma’s very next offensive play. I’m not.

It begs the question if settling for the field goal (with the way OU had just abused the Cowboy defense most of the second half), then missing that field goal did anything to the Cowboys’ psyche. How could it not?

Does it keep Mixon from scoring? I have no idea. Probably not.

Mike Gundy went the safe route. If Mason Rudolph had fumbled another snap on fourth down or the offense would have come up short, the Cowboys are in no better position. You could argue and I have that the safe route is not the way to go there.

But if that field goal is made, the Cowboys would have still had a chance.