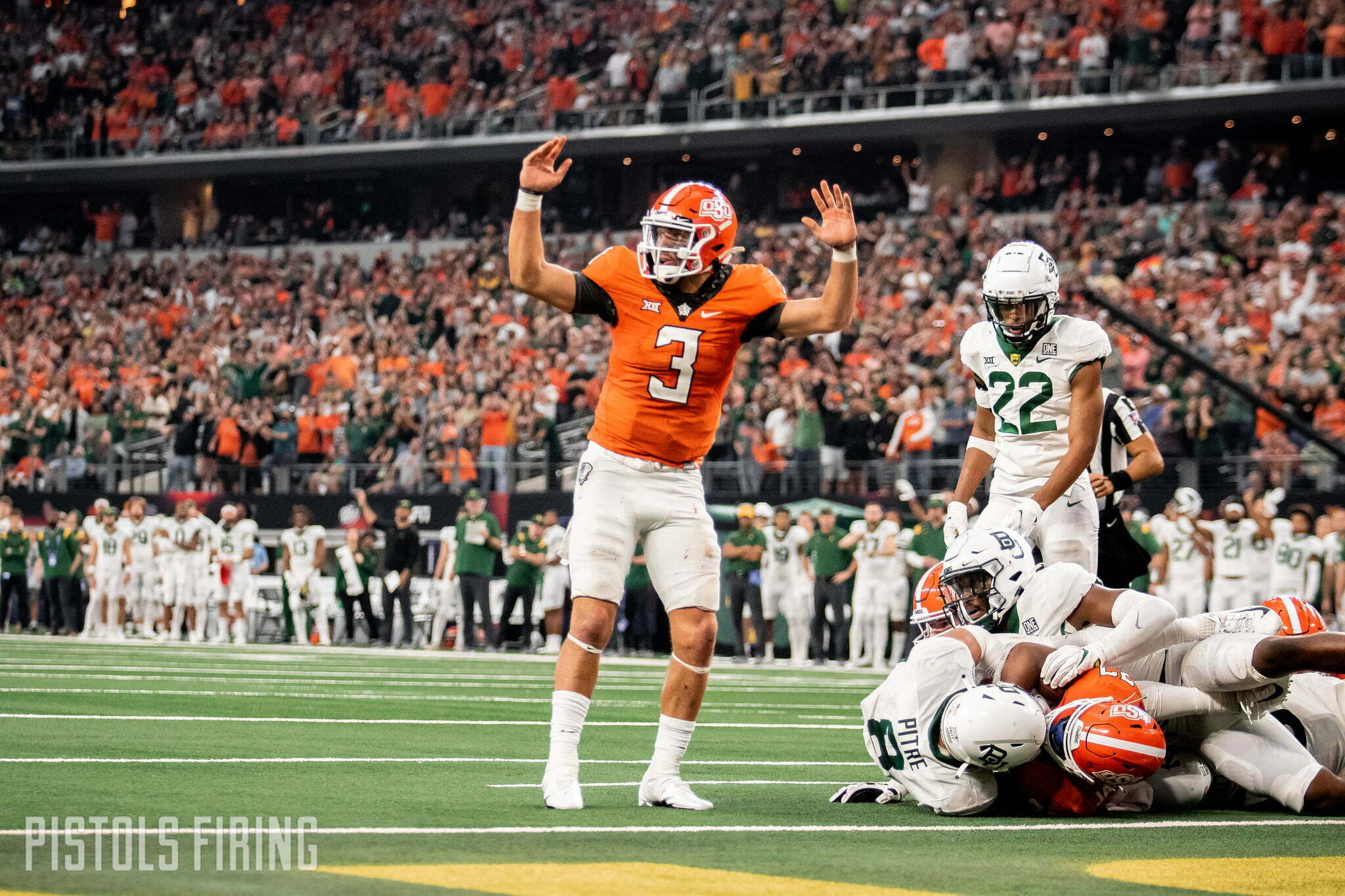 The Cowboys suffered a gut punch at the goal line on Saturday, and then they went back for another, and another, and more, and they still came up empty.

Oklahoma State came within six yards of Baylor’s end zone five times during the Big 12 Championship, but only crossed it once. Success on any one of those other four tries means that the Cowboys are Big 12 Champs, and possibly playing for Alabama on that exact same field again in the playoff semifinal four weeks later.

Days later, the pain is still present, but a New Year’s Six Bowl against Notre Dame will have to serve as a consolation.

“When you put yourself in a situation like we were in yesterday, you had really two good football teams playing and, unfortunately, one of them had to come out,” said Gundy. “If we had two more inches, Baylor would be in the same situation we are now. Sometimes that happens.”

The inability to gain those two inches when the Cowboys had spent so much of this season as the aggressor on the ground was hurtful.

“It’s pretty disheartening,” said senior guard Josh Sills after the game. “For us as a standpoint, you know, that last drive every time we get on the field, we expect to score points, so, we kind of expected to move the ball. We just came up a couple of inches short.”

The Cowboys had found ways to get just enough from the running game in the two weeks prior against Texas Tech and Oklahoma despite replacements on the offensive line and an obviously hampered Jaylen Warren. On Saturday, OSU offense mustered just 66 yards on 1.8 yards per attempt. Warren dressed for the game in Arlington but never took a handoff. It had to be a special kind of hurt for him watching it all unfold.

Rushers who’ve been productive this year like Dezmon Jackson, Dominic Richardson and even Spencer Sanders, found themselves fighting an uphill battle or completely swallowed up in the backfield. Led by interior terror Siaki Ika, the Baylor front bull-rushed the OSU offensive line and swallowed up eight tackles for loss. Ika had 2.5 stops behind the line of scrimmage. If you’d asked right after the game I would have guessed he had twice that many.

Sanders has his own pain. A career-high and Big 12 Championship record four interceptions will follow him for a while, especially if he’s unable to get back to Arlington and make it right.

For a defense that shut out the Bears in the second half, this is its own type of torture. OSU held Baylor to just three first downs and 67 yards in the final two quarters. One more of either for the offense decides the game.

For the fans, it’s agony. The consensus for this Cowboy team was good, not great a year ago. But the defense was better than advertised and the Pokes’ offense was led by impromptu heroes like Warren and Sanders who, for about half the season, seemed to have exorcised those turnover demons.

Despite the turnovers, Sanders looked poised to lead the Cowboys on a miracle finish and keep hope alive. After getting pinned at his own 10-yard line, Sanders went 7-for-8 to drive the Cowboys to the 6-yard line and set up a chance at history. He had one crack at it himself, and the Cowboys had multiple shots from the 2.

This will always hurt because over the previous two weeks, hope became belief. The Cowboys got to the precipice by unconventional means, and then chaos ensued. And then Bedlam ensued. And all of the sudden, OSU fan believed this might be another special year, or the special year.

It hurts because they were so close.

“We learned a lot as an organization, and I told them, these things are difficult to swallow, but we’ll be back,” said Gundy after the loss. “We learn from these situations, and we make it better next time.”

Therein lies the balm. Next time.

There will be other shots at the Big 12 crown. Last week, I wrote about OSU running the new-look Big 12, and nothing that happened on the field in Arlington changed that. The Cowboys will likely have at least one shot to send their rival, Oklahoma, packing to the SEC. They’ll obviously still have to deal with Baylor and have new challenges with Cincinnati and the rest of the lot that comes in.

The majority of OSU’s vaunted defense is set to return and, if you believe Mike Gundy, OSU will do just about anything short of a blank check to keep Jim Knowles in town. And Spencer Sanders will be better. And his group of young receivers that were baptized by fire should be really good.

After a few more days the pain will have probably subsided for the people that matter most. OSU has a New Year’s Six Bowl against Notre Dame, for God’s sake.

“There’s not anything that happened yesterday that can take away from what these guys have achieved this year,” said Gundy. “And we’re going to give them a week off, and I fully expect them to come back later this weekend and be ready to go and excited about playing Notre Dame.”

The Cowboys reached their ceiling on Saturday, and it was just inches short of the program’s second Big 12 title. Fortunately, they still have room to grow.