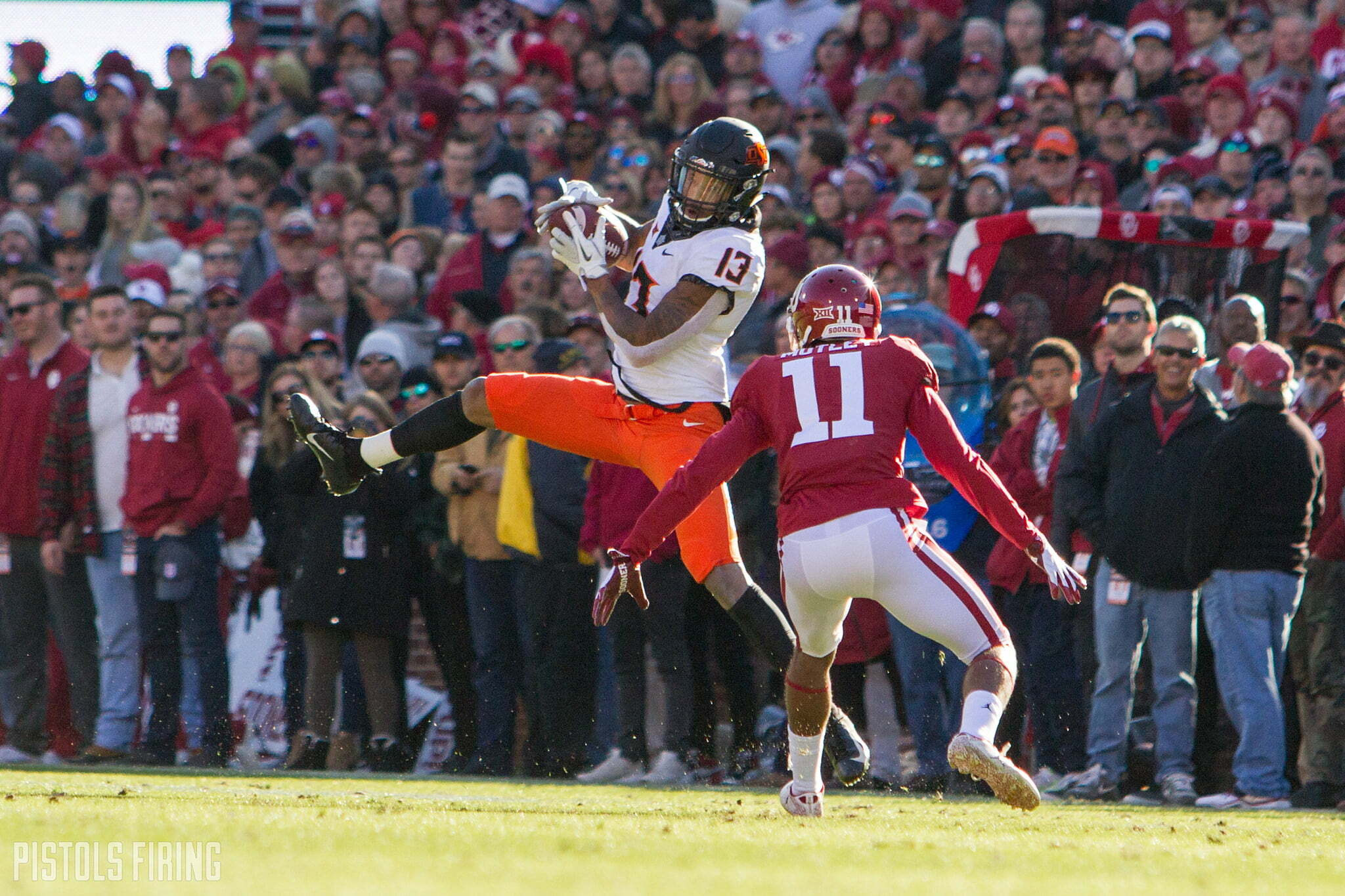 In a somewhat surprising Twitter announcement last month, Tyron Johnson let OSU’s fans know that he had made his last highlight-reel grab in orange.

It was surprising because Johnson never quite lived up to the hype that his five-star background commanded, at least from a production standpoint. But with a returning Biletnikoff snub in Tylan Wallace and bugs to be worked out in both the OC and QB department, Tyron improving his draft stock in his senior year was far from a sure thing.

So let’s take a look at Tyron’s case as an NFL prospect and where he might end up come draft weekend.

Not only is the bag man absent from any mock drafts that I could get my hands on, he’s not included in any of the wide receiver rankings either. Even draftteck.com‘s ranking of 42 draft-eligible Big 12 prospects did not include Tyron. Zach Sinor and Marcus Keyes both made that list, for what it’s worth.

The lack of overall (and steady) production.

Though we have been absolutely certain of the greatness of the former five-star recruit — since even before he even debut for Oklahoma State — Johnson’s production during his two years on the field will be less than a home run for evaluators.

Tyron was never OSU’s No. 1 option, and though he finished his career on a hot streak — 88 yards per game on 61.5-percent catch rate and four TDs in his final five games — his year-long stats aren’t eye-popping. (Tyron didn’t even earn an all-conference honorable mention).

He won’t get the chance to showcase his skills or measureables at the combine, but a nice showing at OSU’s pro day couldn’t hurt him. And a good showing seems likely.

Just turn on the tape.

Tyron plays the role of Allen Iverson and Parnell Motley does a nice job of channeling his inner crossed-up Derek Fisher. That’s good for 6.

And get Tyron the ball in space and he’ll likely do something just as impressive.

But his forte in college was the deep ball, and his ability to take the top off of a defense translates to any level of football.

Tyron’s film is fun to watch, but it likely won’t be enough to earn him anything better than a Day 3 selection, especially without a chance to turn heads at the combine.

But Tyron could be an outright steal for the right team. With his size (6-1 and 194 pounds), Tyron can play at multiple positions on the field and thrive. We know that he can get loose for the deep ball, and we know what he can do in a phone booth. Hopefully he lands with a team that can get him the ball in space and give him a chance to show out.

The later rounds of the draft (and most NFL practice squads) are filled with former elite-level prospects who didn’t quite live up to their star level in college. But Tyron’s lack of production seemed to have more to do with who else was on his team — with back-to-back teammates attending the Biletnikoff ceremony — than any lack of effort or ability on his part. Given the chance I could see him excelling at the next level.