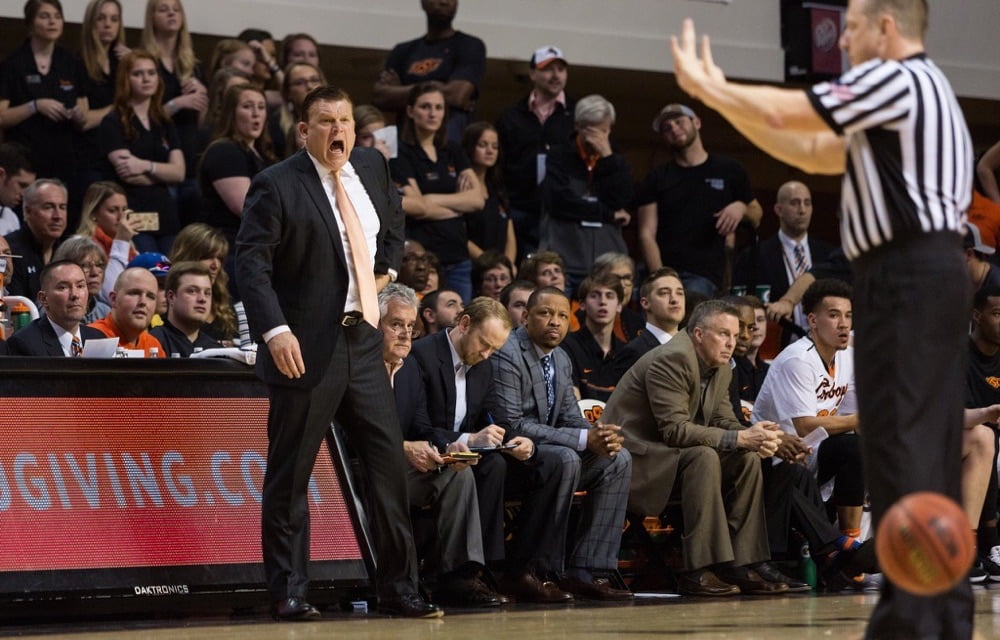 Brad Underwood hasn’t stepped foot on the campus of Kansas State University in three years, he said. He was on a little summer vacation to see some old friends, “playin’ golf, eatin’ dinners on patios and hanging out.”

Underwood played for the Wildcats in Bramlage Coliseum from 1984-86 and returned as an assistant coach from 2006-12. He said it was weird when coach Bruce Weber’s K-State team came to Gallagher-Iba Arena on Jan. 18.

But when his Oklahoma State men’s basketball team plays there Wednesday, he said while he is dialed in on the game, it could be a little different.

“Pregame at Kansas State was really special, and it was as a player,” Underwood said. “You don’t forget those things. You don’t forget running on the floor at Aherm Field House. You don’t forget walking out at Bramlage. You always look to your right, and the Wabash Cannonball was being played, and the students, all 5,000 of ’em, were going nuts.

“That always kinda made the hair on the back of your neck stand up.”

The Cowboys are winners of eight our of their last nine games. They have climbed out of the 0-6 hole they dug for themselves to start Big 12 play. Jawun Evans is playing like he deserved to be at NBA All-Star Weekend in New Orleans, and Mitchell Solomon just posted a +15 efficiency rating in Bedlam.

Underwood said he remembers a time when life was good in Manhattan, Kansas.

“We had great, great friends there, and they still are,” Underwood said. “It was a big part of our lives for six years when we lived there, and it would be foolish not to think anything positive about our time there.”

It will be weird to hang a left rather than turning right in the tunnel to go into the visitors’ locker room Wednesday, he said, but he feels he left K-State with his head held high.

“We had a lot of sweat equity in that program, and I’m very proud of that,” Underwood said.

A lot of friends and family will be inside Bramlage Coliseum to see Underwood on the Cowboys’ sideline, he said. He doesn’t know whether they will wear orange or purple, but having them there makes it special, he said.

What makes OSU special is the people, Underwood said; it’s no different in Manhattan. A little conflicting interest isn’t a big deal, he said.

“It’s a 40-minute basketball game in the middle of the best league in the country, and I’m gonna go in there and fight, and I know (coach) Bruce (Weber) has got his guys on an uptake, and they’re there to fight,” Underwood said. “It should be a heck of a college basketball game.”

Basketball aside, he said he doesn’t know whether the neck hairs will spike.

“You relive that, and you have such great memories,” Underwood said. “Yet it’s your job to go in there and beat ’em.”