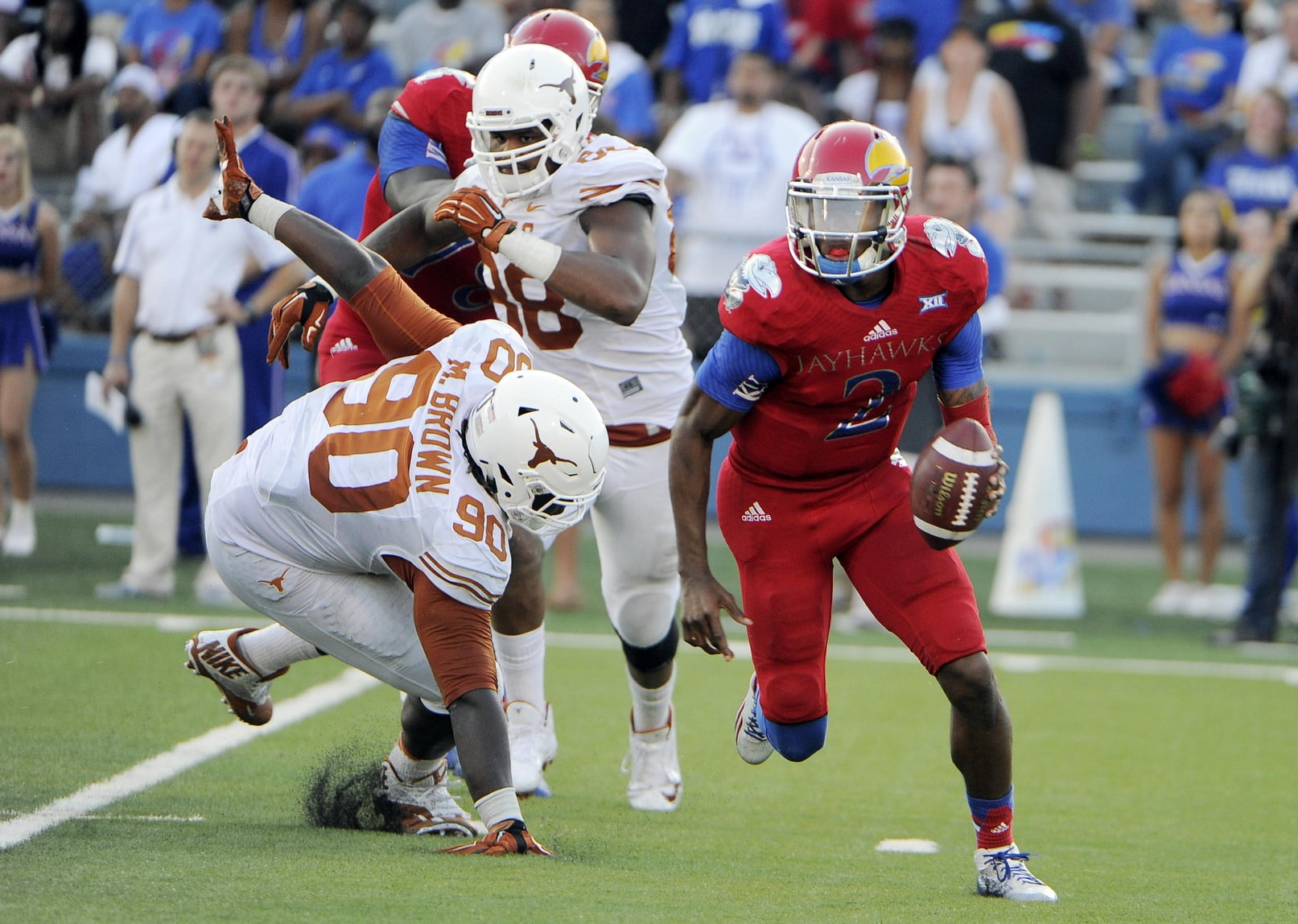 What a week for Montell Cozart, am I right? His team was shutout 23-0 by the dysfunctional Texas Longhorns, he threw four interceptions in the process and then his head coach was canned after the game.

The silver lining here for Cozart and the Jayhawks is that nobody expected them to be to be good, anyway. They’ll try their luck again this weekend at West Virginia.

I hate to do this to Cozart, but I’m ranking the quarterbacks who didn’t play last week higher than him. Negative points lead to negative reviews, and I’m not entirely certain we can’t say Knight was more impressive at home on his couch than Cozart was on the field.

Knight and the Sooners will be back in action this weekend against TCU.

The hits keep on coming for Cozart.

Trickett and the Mountaineers sit at 2-2 on the season, but have impressed in their losing efforts to Alabama and Oklahoma. This team looks to get on the right side of .500 this weekend against…you guessed it… Montell Cozart and the Kansas Jayhawks.

Webb and the Red Raiders hung tight in Stillwater for a while, but eventually the Cowboys were able to overcome the aerial assault. A late injury to his non-throwing shoulder knocked Webb from the game, making way for the Cowboys to seal this one after an interception from the backup.

He’ll continue to score his points, as Texas Tech will undoubtedly look to continue throwing the ball in bunches. Don’t expect a winning effort this weekend, however, as the Red Raiders head to Manhattan to take on the Kansas State Wildcats.
6. Jake Waters, Kansas State: 20 Points
Passing: 10/15 for 209 yards, 1 TD
Rushing: 29 yards, 1 TD

Facing an overmatched UTEP team in their last game before conference play, Waters was his typical self: Efficient, if not unimpressive through the air. Effective and capable of hitting pay dirt on the ground.

The Wildcats face Texas Tech on Saturday, and I’m expecting a big day from Waters. The Red Raider defense just gave up 27 yards and a score on the ground to Daxx Garman, and with Waters always looking to run, he could be a big problem.

Even though the competition was JV level in Kansas, it’s good to see Swoopes having some success among the circus that Texas has become. He had a hand in all three of the Longhorn touchdowns, and didn’t make a lot of mistakes against the Jayhawk defense.

Unfortunately for Swoopes, the party doesn’t appear to be lasting long. He and the Longhorns will host Baylor this weekend, and with the Longhorns inexplicably playing the “Big brother, little brother” card this week…things could get ugly for Swoopes. Fast.

Despite getting beat 49-28 by Baylor, Richardson had a good fantasy day based on his ability to run the football. He connected on less than half of his throws, but led the next leading rusher on his team by a whopping 84 yards. In fact, the running backs on his team only accounted for 28 yards. That’s a problem. 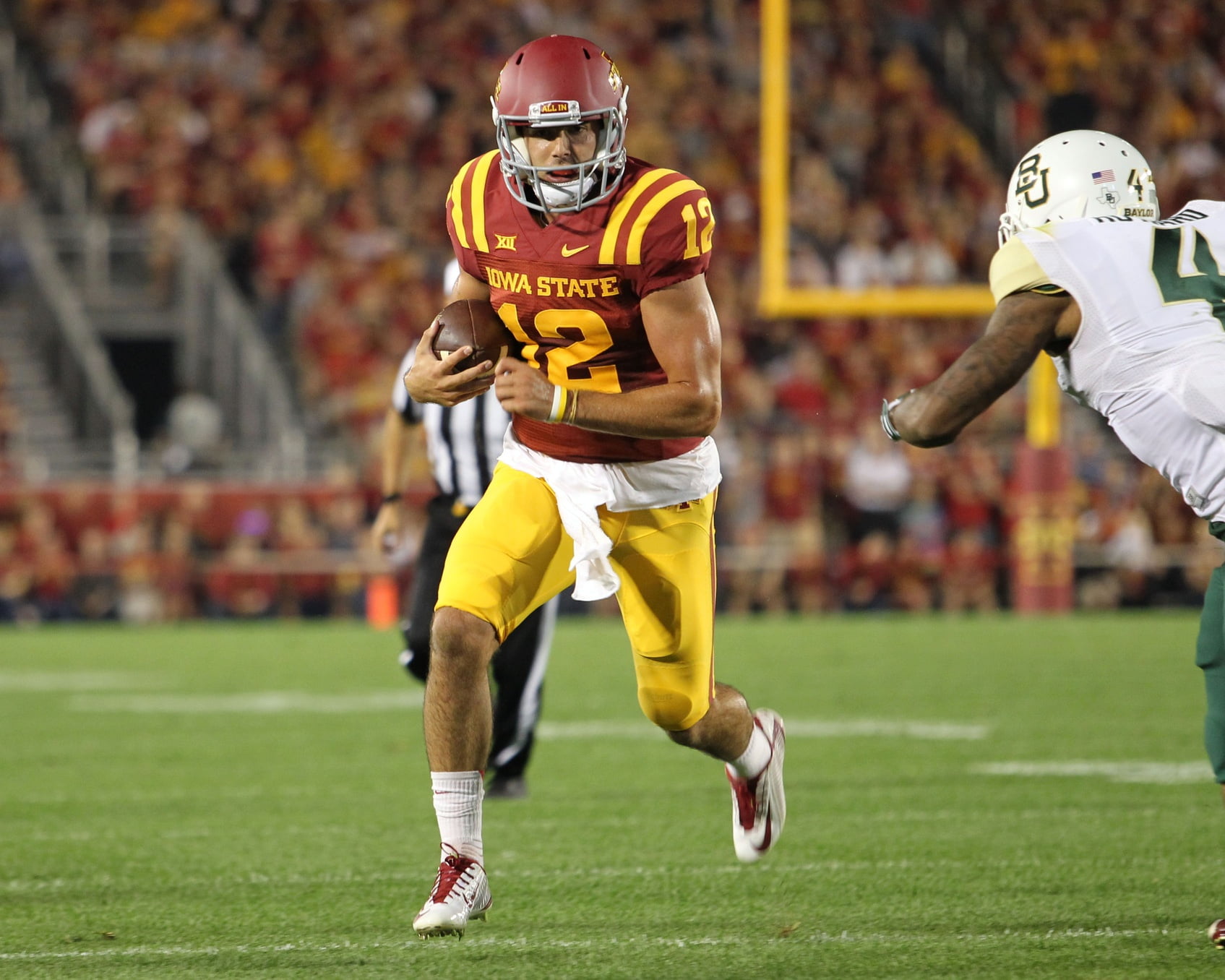 Richardson and the Cyclones head to Stillwater this weekend for a date with the 21st ranked Cowboys. The Oklahoma State defense has been impressive thus far, so don’t expect Richardson to find traction.

Bryce Petty played like Bryce Petty last weekend against Iowa State, making up for his one interception with two scores on the ground. Deceivingly fast for a big QB, his 47 yards and multiple trips to the end zone paved the way for the Bears.

With a trip to Austin on the books for this weekend, expect Petty to feast on a weak Longhorn defense. I’d even go as far as to guess he’ll be Big XII Offensive Player of the Week next week.

If anything, we know one thing about Daxx Garman: He’s going deep.

Connecting on 17 passes for an incredible 370 yards, Garman looked toward the Go Route early and often on Thursday night against Texas Tech. His Mona Lisa came on a deep ball to Tyreek Hill, perhaps a glimpse into the sort of thing the Cowboys will look to deploy on a weekly basis.

In addition to the passing, he tacked on a score on the ground as his JW Walsh impersonation. The interception in the end zone was a bonehead move, but all in all this kid can play. He should find similar success against Iowa State this weekend.

While the competition was less than stellar in SMU, Boykin turned in another great performance on Saturday. He accounted for 6 touchdowns by himself, again showing dual-threat capabilities every step of the way.

The true test comes this weekend, as Boykin and the Horned Frogs take on Oklahoma and a defense that will be more than happy to test the young QB’s true ability. I’m not saying he’ll fold…but…yeah, he’ll probably fold.