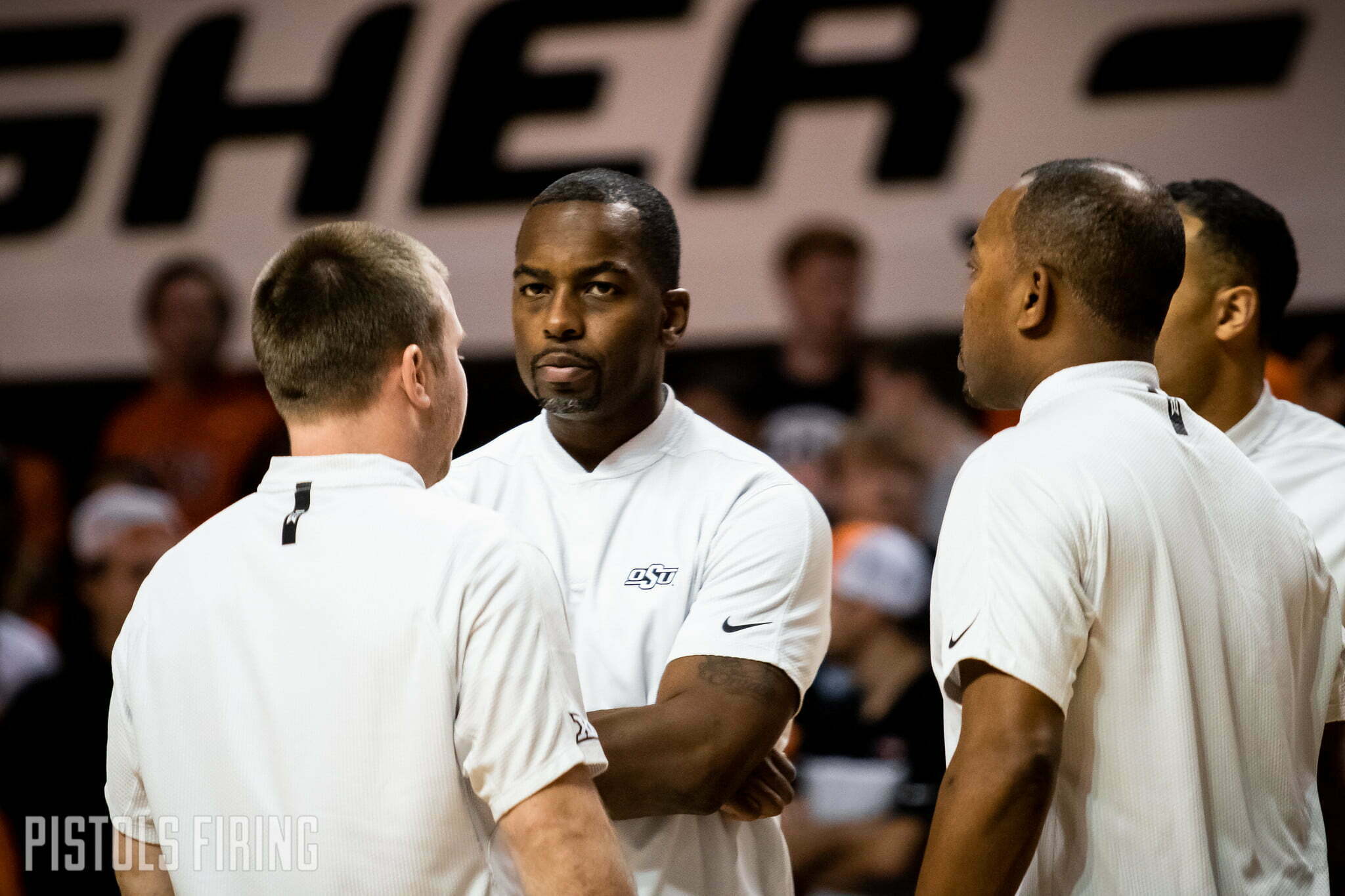 STILLWATER — Mike Boynton starts Year 5 as the Cowboys’ coach 1-0, and he did so in dominant fashion.

Oklahoma State demolished UT-Arlington 88-45 on Tuesday in Gallagher-Iba Arena. Here is what Boynton had to say after the game.

“You know, obviously, pleased with the defensive engagement to start both halves for sure, but really throughout the game. Proud of our kids again to continue to be resilient. There’s an alternative to how we feel right now. Some teams are experiencing that, I’m sure, today and so happy to get out of here and be 1-0 and looking forward to continue to build on what we did tonight.”

“I thought he played 30 minutes until I looked at the box score. His impact on the game was sensational on both ends of the court, really. But to look and see he did that in all of 17 minutes was impressive. He keeps getting better. When he got here — he was the last one to get here. Obviously, he wasn’t available until late, but I don’t think he even came until August, so he missed the summer with us as well. But to see his improvement since he’s gotten here on both offensive and defensive ends understanding our system gives you a lot of reason for optimism moving forward.”

On the alley-oop play to start the second half

“Rondel set the screen. It was a designed play. We missed him, we thought, a couple times in the first half. We wanted to try to give him an opportunity and it helps to be 6-11 and athletic. It’s kinda unfair to be 6-11 and athletic. Being either one is a pretty good start. He’s got some tremendous lob-catching ability and it’s something that we look forward to being able to use moving forward.”

On if he wanted to make a statement Tuesday night

“We want to make a statement every night. Our kids want to make a statement every night. Obviously, I have a lot of respect for Coach (Greg) Young. I think eventually he’ll get that program going and have a really successful run there. I know a lot of the kids on their team, their staff but it’s truly about us and trying to make the most of whatever this team is going to be able to do. Tonight was just the beginning of it.”

On if you can turn off defensive intensity

“I don’t know. I don’t know if any one of them want to try that. I just told them it’s the thing we have to be able to hang our hats on. We shot free throws well tonight, we shot relatively well from 3 but we’re not always going to. So, if we can establish the defensive side the way we did tonight as our identity then that gives us a chance on nights where shots don’t fall. That’s the expectation is that you compete as hard as you can and you try to make as many plays for your team as possible on the defensive end.

“And I’ll give a little credit, right? I feel like we got the best football defense in the country and I think the team’s paying attention and make sure we’re at least part of that conversation. Shoutout to Jim Knowles and his crew over there.”

On getting the walk-ons in

“It means a lot. They didn’t even dress last year. Weston Church got caught up in COVID protocols and the one opportunity he was going to even to travel with us in the postseason, which was really, really unfortunate, but it’s what we were dealing with last year. To not only have them dressed, because they were practicing every day and doing everything we asked them to do, to have them have a chance to get in tonight and both score is truly awesome.”

On Carson Sager saying his points counting with Weston Church’s

That’s good. If they want to combine them like Ice, they’ll have 1,500 by the end of the year.

“I mean, we’ve seen a lot of zone here the first couple of times we’ve been out. So, continue to get better at zone offense. I think that’s something we’ll see moving forward. We got to keep getting better in transition defensively. I think we’re really, really good in the half court. That’s something we’ve talked about, our length and athleticism and ability to kind of switch and keep people out of the lane and then have a human eraser back there just adds another element. That’s still without returning shot blocker in the conference not playing yet. So I think our defense and Bryce Williams himself is a pretty damn good defender, so we’ll get better here soon when those guys are able to play for us.”

On what Keylan Boone brought off the bench

“Energy, and I think it was really what keyed him being able to make shots, because he gave himself up, put the team first. He also had a few offensive rebounds and he got a couple  steals and then he was open and the game repaid him. We always talk about the game rewarding great effort and I think that was a great example of it tonight. But, also shows the depth, I mean he could easily make a case to be a starter for us, probably. It’s a pretty tough lineup though, right? Bryce Williams, Bryce Thompson, Matthew-Alexander Moncrieffe, Kalib Boone, coming off the bench, gives us a chance to have a pretty good team.”

“It won’t be that difficult. The difficult part is just figuring out the rotation during the game, really. Because the rhythm of the game, the flow, that’s the challenge, right? So, like even [Bernard Kouma], spot minutes, he’s effective in those minutes. But, Moussa (Cisse is) playing so well, you know, that’s more the deal. Kind of figuring out the rotation in game, not necessarily who will be out there starting.”

“Yeah, I mean, he’s had more consistency in practice this year than he has his first two. His freshman year — a lot of them, even a guy like Avery (Anderson) that had no idea what it takes to be successful, certainly at this level, but really any level. Then last year was a little bit better, but still didn’t have an identity. And this year, I think he feels like there’s a little bit more urgency, and he’s looking over his shoulder. If he doesn’t play well, you could get buried on this roster, a little bit. So, trying to have a little bit of urgency so that doesn’t happen.”

“It’ll take some more games. Bryce Thompson didn’t shoot it great today, especially early, made a couple late. I think Woody (Newton’s) going to be a good shooter, he just hasn’t found a rhythm and flow in our offense yet. And those will be two guys that will be a key factor in our ability to be an efficient 3-point shooting team.”

On if Donovan Williams is getting more comfortable

“I think so. He looks uncomfortable. Again, he’s continuing to hang his hat on making selfless hustle plays and things of that nature. Again, when you’re a guy who’s more of a role player, right, everybody’s got a role, but when you’re not relied on to score, you can embrace the fact that you can still have value in your team’s success. It really takes pressure off you in a lot of ways. It’s one thing to be able when we’re going to ask you to score 15 to 20 [points] a game most nights, that’s hard, but to be a guy that goes out there, communicates on defense, rebounds and makes sure that we run the offense officially, I think that takes a little bit of edge off.”

“He’s kind of got a professional mentality. He’s that guy that the next shot is going in, all the time. So, I don’t ever really get worried about him. I didn’t talk to him any differently at halftime. I told him to keep playing hard, but the only thing I told him was don’t allow missing shots to affect him on defense. That was the message, and for the most part he did that.”

“Yeah. It’s a clerical deal. We had kind of a staff booking issue. We were able to overcome that one pretty quickly.”

“That’s one thing our staff will have to figure out is … whether they can play together. That’s certainly something we got to try to explore because we have to. You got two really imposing guys. We haven’t really had that here in my time. So that’ll be something that we look at as Kalib comes back from his injury.”

On Avery Anderson’s leadership and start

“I think Avery’s biggest asset is he cares, like a high-care factor and cares in a healthy way about winning. He has an extremely high level of confidence also because he really works at this. He’s got his sights set on becoming the best version of himself. He obviously flirted with the NBA process last year, got some feedback, and I think that’s really driven him to be a little bit more vocal and a little bit more efficient as a player, as well.”

On if Avery Anderson is a more confident shooter now

“I thought he hunted a little bit late, but that’s part of it. He’s a scorer still. The best thing he does is make plays. You kind of got to let him be who he is if you want to get the most out of him. I think it’s part of the reason why it’s a good fit for him here because as long as he’s giving us everything he has on the defensive end, we allow him to have a little bit more freedom to take some chances offensively, where some other systems are a little bit more restrictive.”

“They’re amazing. I feel like these are our people and they have our back. I think there’s a little bit more of a rally, but I really think regardless of what the other circumstance would be, this is what it would look like. This is the kind of momentum I felt building going into the end of last season and what we were able to recruit, the excitement coming into this season. I’m excited for the crowds to continue to get better. Obviously, early on you’re gonna not have your best crowds, right? When Big 12 teams start rolling in here or more high caliber or more nationally relevant teams, so to speak, show up in here, the crowds will be even better. So, this is a tremendous start.”

“We talked about that being one of the keys to our defensive philosophy is trying to limit teams’ effectiveness at the 3-point line. It’s so much of the fabric of how the game is played these days. If we can take that away because teams aren’t going to stop shooting them, so you want to make them as inefficient and contest as many of them as possible. Now, teams aren’t gonna shoot 2-for-20 every game, but we want to keep them way away from that 35 to 40% range, which is about where really good teams shoot them. If we keep them below 30, then we feel like we give ourselves a really, really good chance to win on a nightly basis.”