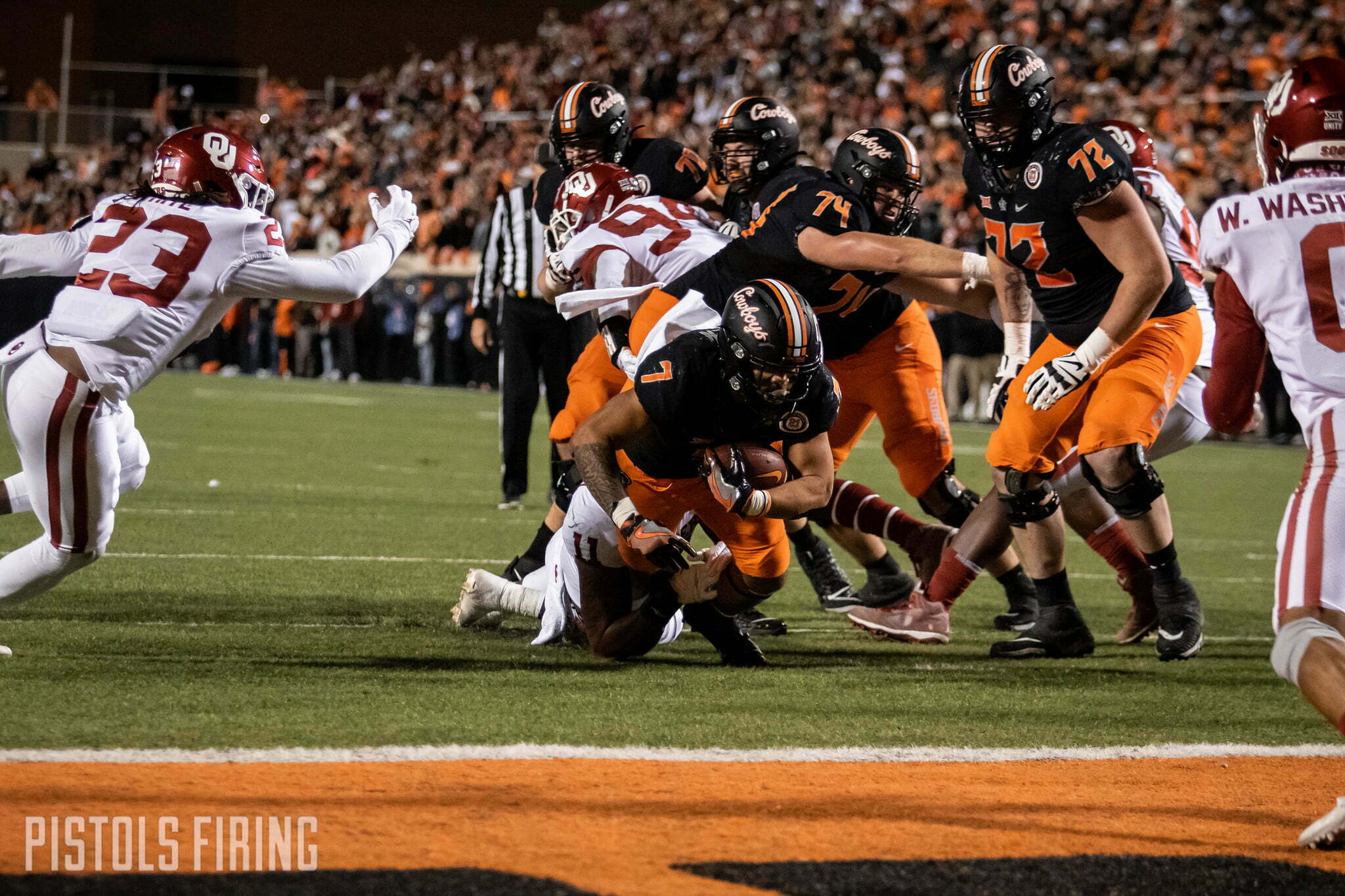 But there were many other winners and losers from Saturday night’s festivities inside Boone Pickens Stadium, from the fans, to the coaches, to playoff hopes and more.

Let’s dive right in to who, and what, came out looking good (and not so good) from the night that was.

With just two wins in the Bedlam series as OSU’s head coach entering the night, Mike Gundy needed this one more than most — especially with his team favored by four points. And he got it.

I thought from a coaching perspective he was really good, too. There was maybe a call here or there I disagreed with — including punting on a fourth-and-short — but of course that was my only major beef in the moment and that decision instantly paid off with OU bobbling the punt and giving it back to OSU in the red zone.

Gundy this week suggested this could be the last Bedlam game in Stillwater to heighten the stakes even more, but it’s not as if they weren’t already high. After all, it’s Bedlam — and OU was playing for a spot in the Big 12 title game. To knock the Sooners out of the mix in this situation was a massive boon to Gundy’s standing and validating of what has been I think his best year as the Cowboys head coach.

OU all season has scooted by on the margins. And, if you have watched them at all, you know what I’m talking about. Maybe one of the most fortunate 10-win teams I’ve seen in years. That’s a credit to Lincoln Riley, I guess, that they’ve come this far, but it’s pretty damning, too. This team had playoff hopes entering the season behind a Heisman quarterback and a stout defense. And by Saturday, that Heisman quarterback was riding the pine behind Caleb Williams and that stout defense was getting gashed on nearly every possession. This team just really didn’t improve much all season and despite all its talent, OSU was no-doubt the better team. Riley’s still one of the best offensive coaches in the game and a really great head coach, but I won’t sugarcoat it: This is easily his most disappointing season since he took over in Norman. What could’ve been versus what actually was this season is probably sickening to think about if you’re an OU fan. (Ya hate to see it, y’know?)

In the first half, OSU’s defense was put in just some awful positions, including a second-quarter INT from Spencer Sanders that led to a TD just before half. It resulted in OU scoring 17 in the second quarter and 24 in the first half. But, holy smokes was Jim Knowles and his squad brilliant in the second half.

OU scored zero offensive points in the third and fourth quarter. Zero. The only points it scored — nine — came on a safety and a fumble return off a botched punt. Jim Knowles done went and made OSU defense great again. It was awesome to see it play out on the big stage in the biggest game of the season.

Euphoria and elation were in abundance Saturday inside Boone Pickens Stadium. Fans rushed the field to celebrate the Bedlam win. But OSU fans were given quite the treat in the hours before the win, too. That was an all-time Bedlam game that played out. The third quarter was gross, and it looked bleak there for a bit, but to be in the building for that one is one fans will tell stories about for years to come. If that was the last Bedlam in Stillwater, then boy it was worth the price of admission.

OU had no answers in the second half on offense. When OSU’s defense moved into more zone coverage, Caleb Williams was firing blanks and OU’s receivers couldn’t find holes in the defense. It’s been a problem all season for OU in games against Iowa State and Baylor, and OSU took a page out of their playbooks and used it to suffocate OU’s offense down the home stretch.

Ohio State got smacked by Michigan. Alabama darn near lost to Auburn. And, all of a sudden, with the win over OU, OSU’s playoff hopes have new life. It kinda feels like a win-and-in situation next week for the Big 12 title game.

OSU will need some help — Notre Dame and Alabama losing would do wonders — but at this point OSU’s resume is as good as any in college football. Tuesday’s playoff rankings should be interesting!

It wasn’t all good on Saturday — Sanders threw two picks — but what he did on the ground (he led the team in rushing with 93 yards on 16 carries) and with his arm (he had 214 yards on 19 completions) was the difference in the game.