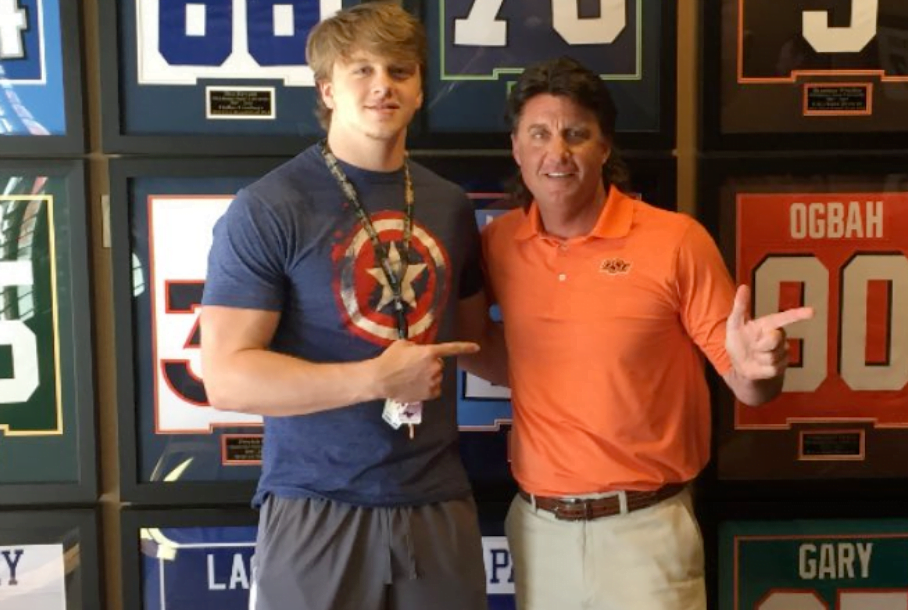 Oklahoma State has built out an impressive eight-man recruiting class in the 2020 cycle now headlined by quarterback-of-the-future Shane Illingworth, who committed last week. The class currently ranks inside the top 25 of the national rankings and No. 2 in the Big 12, which would go down as one of the most talent-rich classes ever under Mike Gundy.

The class is still far from complete, though. At the very least there are eight more commitments to be had — probably closer to double that — before the cycle is complete and signatures on letters of intent are dry. What’s important for OSU now is maintaining its spring momentum into the summer by creative a wave of energy around the program. A four-star commitment can beget another four-star commitment, and on the cycle can go.

So what, exactly, does momentum look like in the 2020 cycle? And who could potentially keep it rolling? Here are eight prospects to watch as we enter the summer.

Polk, a standout from Saguaro, Arizona, recently made an official visit to Oklahoma State this spring shortly after OSU offered. He’s a big-bodied pass-catcher whose services are already in high demand, with offers already in hand from UCLA, Tennessee, Arizona, Cal, Florida, Iowa State and others. OSU can afford to be picky at receiver in this class and Polk is one the staff will hold out for.

Black’s a longtime OSU target; the Pokes offered in the summer of 2017, his second Division I offer at the time. A Connally High product, OSU may have an in here having already nabbed a commitment from his teammate Trent Pullen.

An unranked tight end prospect from Salina, Kansas, Stewart represents one of the newest targets for OSU at the position after picking up an offer in late April. He’s a late-rising tight end/defensive end who Rivals this week tabbed as an impressive performer in one of its camps in Saint Louis.

When talking about performances that were completely different than we expected, Kansas native Quinton Stewart deserves comment. We evaluated and rated Stewart as a strongside defensive end, but he came to St. Louis and worked out at tight end, where he put together an outstanding performance. Stewart has the muscled-up frame that often affects agility, but there was no stiffness in his play. He popped easily in and out of his breaks and showed a natural pair of hands. Kansas and Oklahoma State have offered Stewart at tight end, but others, like Kansas State, are still evaluating him as a defensive end. [Rivals]

Carpenter, like the aforementioned Stewart, is a recent target having picked up his OSU offer two weeks ago. He’s a former North Texas pledge who backed off his commitment after tons of other high major interest in him emerged. If OSU were to land the 6-foot-4 Polk, Carpenter could complement him well in the class to give OSU a nice inside (Carpenter) outside (Polk) tandem to build on.

Flagg and OSU have been circling one another for some time, and he seems to have developed a nice rapport with OSU defensive coordinator Jim Knowles. He’s a stocky, hard-hitting backer who can play inside and complement the two commitments OSU currently has from Cole Thompson and Brynden Walker on the outside backer spots. OSU is battling Boston College and Texas Tech.

If you haven’t picked it up by now, this class is going to be deep at linebacker. Harris and Flagg would both be takes if they were to commit, as it seems OSU is likely to try and take at least two commitments at inside linebacker. Harris recently included OSU among his top eight schools and he’s hinted on social media that he really likes the Pokes.

Wilkerson is a former teammate of 2019 OSU signee Langston Anderson, and like Harris, he’s hinted on social media that OSU is a school he really enjoys, having visited at least twice. Wilkerson is a competitive (and First Team All-Confidence) receiver who can catch contested balls and speed through traffic like a Maserati.

OSU hasn’t yet landed a running back in the 2020 cycle but will take at least one. Bradford is one of the many who have been offered and remains in the mix. His diminutive frame doesn’t slow him down, and the Lancaster, Texas native is an absolute burner out of the backfield. OSU, Baylor, Arkansas are battling for him.