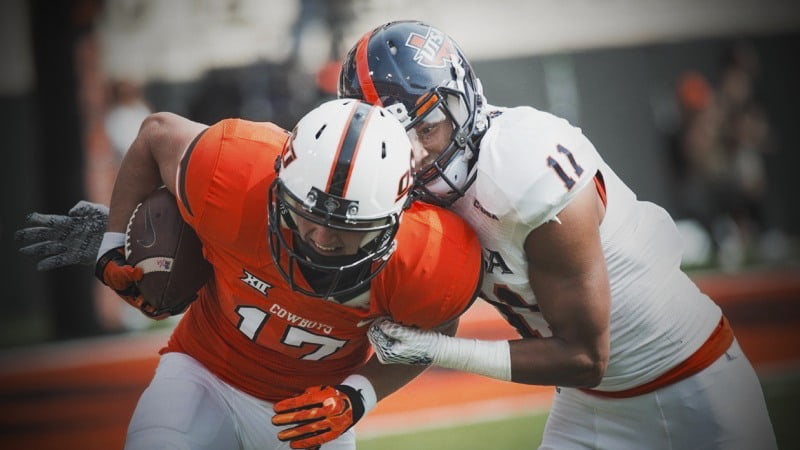 Can Oklahoma State still win the Big 12? That’s the big question I have at this point of the season. I know we’re good (sort of) and have been lucky (very), but can this squad somehow upend Baylor, TCU and others and lift another crown?

I keep calling on 2013 as the year to look to if you want a positive comparison for this year’s Oklahoma State football team. Think about how you felt after the West Virginia game that year. Lights out, right? Ballgame. See you in 2014.

Then a couple of months later OSU had a single drive at the end of Bedlam to win its second Big 12 championship in three years. Who saw that coming with the QB carousel and myriad woes in the offensive backfield? That wasn’t a great team, but it perfectly fulfilled the Mike Gundy formula. Protect the ball. Win with an elite defense.

This team has a chance to do the same.

I was talking with someone the other day who was mildly convinced this was 2013 all over again. My argument against him was that in that season OSU had a shot in the arm (Clint Chelf) to lift it from being average to below average on offense to really good (and very efficient). It finished the year averaging 2.41. points per drive. This year’s team? Averages almost 3.

That’s not the stat I was referencing in the headline though.

His argument was that some sort of shot in the arm at RB — maybe that’s an OL replacement, maybe a scheme switch, anything — could propel this team to a 2013-like year. I began to agree with him. I’m just not sure OSU has that in the tank right now. Maybe it does.

I was sorting through that 2013 season the other day and I came upon a pretty the startling statistic I’ve referenced. That team was not great at running the football. For as much as we’ve groaned and moaned about this year’s team, that team was barely average in yards per carry. Look at this.

OSU was 54th in the country in yards per carry that year at 4.44. This year? It is 104th at 3.78. That’s really bad. But if you can make that even mediocre, recent history has shown that an average rushing team in Stillwater can win a Big 12 title. I think we can be average. Great? No. Really good? Nah. But average? Yes.

“Offensively, we’ve still got to find a way to run the football and be a more balanced team,” said Mike Gundy on Monday. “We have a lot of work ahead of us, and I’m just looking forward to the week and heading out to Morgantown.” He also noted that he simply wanted to run it for 150 yards a game which is both realistic and a good goal. We’re going to find out a lot in Morgantown this weekend about what this team is and isn’t. If OSU goes up there and gets smoked, it’s going to feel like 2014 all over again. But if it goes up and somehow sneaks away  with a couple of couches and its eighth straight win. Man, we can start talking about a wild November ride.