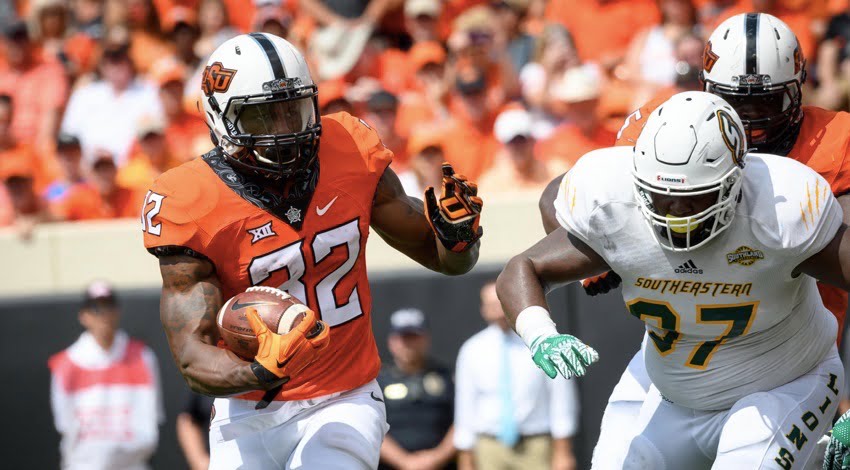 You can read my 10 Thoughts on the game here. Let’s empty out the notebook for the first contest of 2016.

• One of the most underrated parts of the new uniform is the white pants/socks/shoes look as perfectly displayed by Jalen McCleskey and others. Normally I’m a fan of the USC white socks/black shoes uni, but for OSU and these threads, it works perfectly.

• Say whatever you want about Chris Carson, you can’t really ever say he doesn’t run hard. This was impressive (and would have been against Stillwater High).

• All analysis aside, it was pretty dang cool to see someone named Barry Sanders in an OSU uniform.

• The Justin Gilbert Memorial Uni Heisman race is currently between Jalen NcCleskey and Lenzy Pipkins. Both looked very different but equally fresh. Might be a year-long bid for the title.

• Random offensive note: I love the TE drag with Blake Jarwin. I bet they use it in a huge spot in a Big 12 game later on this year.

• Justice Hill is bouncy and fun. Could legitimately see him transforming into Joe Randle 2.0 next season.

Just checked. Oklahoma State is favored by 49, so this drive is probably relevant for someone…

• I’m sure resident Xs and Os expert Thomas Fleming will have more on this next week (or later), but OSU played in some interesting diamond formations on Saturday. My diamond formation attitude is a lot like my attitude towards ice cream and Friday Night Lights: cannot get enough.

• I’m going to be so irrational about so many things this year. Rudolph, McCleskey and Bundage wearing No. 1, Barry J., the freshmen. I hope you guys are prepared to traverse this with me.

• I wonder who would win in a Savannah State-Southeastern Louisiana matchup. I wonder how many people would show up.

• Tralund Webber was a fun surprise. He was prominently featured a few times. OSU is certainly deep on defense. I’m just not sure how great it is.

• This made me laugh a lot for some reason.

When you think you scheduled Oklahoma Christian and you realize it’s actually Oklahoma State. pic.twitter.com/PKjC3KoPSc

• I think Saturday was the earliest Gundy has ever removed a QB1. It was also the most asinine it’s been that he brought him back in. If he’d been Willis McGaheed I might never have forgiven Gundy.

• It felt like just from watching the game that OSU getting its RBs to the edge was still a struggle. I’m not totally sure what the issue is here. Could be scheme. Could be slow RBs. Could be bad playcalling. It just felt like the kind of plays that would results in three-and-outs against the Texas’ and TCUs of the world.

Custom paisley pattern on the front and back bumpers of #OKState's helmets. Dig the detail. pic.twitter.com/qZWFC4izmY

• The Jeff Carr swing pass might be my favorite play.

• Rudolph fumbled a snap inside the five while under center. How much evidence do we need as a program to just completely abandon the under-the-center snap altogether? Do we need to lose a Big 12 title while doing it? Worse? CFP? National championship?

• We should have offered SE Louisiana double the dough to play just one half. Or opposing coaches should have the option to press a button that results in a running clock in the second half. There is less shame in just banging a red button than having to make a scene by calling a referee over.

• One of the unintended consequences of scheduling SE Louisiana is that Rudolph doesn’t get to build his stats on the march to 4,000 yards (only Brandon Weeden has ever done this). He got just under 200 through the air, and this will likely be the only game he skips multiple quarters (hopefully), but it does sort of suck.

• Me for most of the second half.