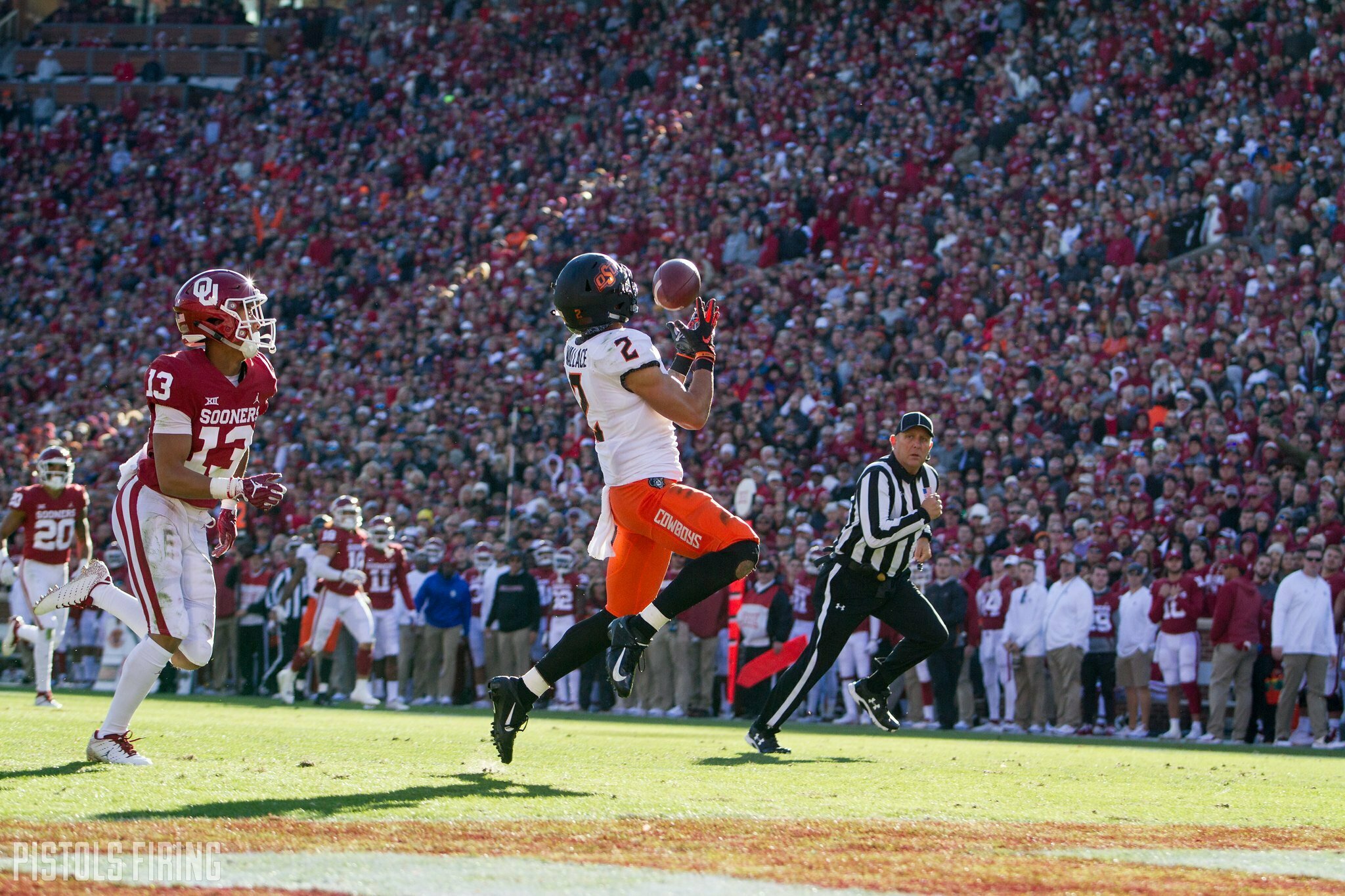 On the other side of this off week, there’s a huge trip to Norman with weighty Big 12 implications awaiting the Cowboys. The PFB staff convened to discuss this upcoming Bedlam and some talking points as we look toward it.

Kyle Cox: Who needs to play out of his mind on offense for OSU to get the W in Norman?

Kyle Boone: Spencer. He’s been turnover-prone since his return, and OSU needs him not only to play mistake-free, but at the top of his game. Making plays with his legs. Connecting on deep targets with Tylan. The whole arsenal has to be in tip-top shape.

Cox: I’m going to go with Chuba. Assuming he’s healthy, he’s the Cowboys’ best player. If the offense runs through him it opens everything for Spencer, Tylan, Braydon, Jelani and the rest of OSU’s weapons.

Marshall Scott: I’m going to cheat and say the offensive line. OSU has the skill guys to compete with OU this season, but with how banged up Charlie Dickey’s group is, I think their play will determine the game.

Boone: In Charlie Dickey I trust.

Cox: For sure. OU is quietly leading the Big 12 in sacks, by the way.

Cox: Okay, who needs to be the Cowboys’ MVP on defense?

Boone: On defense, it’s gotta be the Edmond Santa Fe gang. OSU needs to apply pressure to the other Spencer to try and get him rattled (heh), so Trace Ford and Calvin Bundage will need to be in his grill throughout the game.

Cox: I’m going with Trace Ford. In recent weeks, as OU started looking more like OU, Spencer Rattler hasn’t seen the type of pressure he did early in the Big 12 slate. When he did against K-State, Iowa State and Texas, he struggled and so did the Sooners.

Scott: I’ll say Rodarius Williams. Spencer Rattler has thrown a few woeful picks this year, but OU has some dudes at wide receiver. If Rodarius can shut down one of those guys and maybe get an INT, that could set up OSU nicely.

Cox: What makes you feel the most confident about OSU in this matchup?

Boone: OSU’s defense gives me hope, especially knowing that, presumably, it will be getting back some key players who have been injured. Think this D is legit great. Plus, yeah, getting the best WR in the country back in the fold makes me optimistic.

Cox: OSU’s defense is the biggest variable that we don’t see as often in this series. If Jim Knowles’ group can be disruptive and the secondary can limit the big plays, OU suddenly becomes mortal.

Scott: I usually go with the safe answer, and the one time I didn’t both of you do.

Cox: You do bring up a thought. This is both Chuba’s and Tylan’s final Bedlam, presumably. This game can go even further in cementing their legacies at OSU.

Boone: Yeah, OU being somewhat good but not elite this season also makes me feel confident in OSU’s chances. Spencer Rattler has elite talent but hasn’t been Kyler Murray/Baker Mayfield good, though I think in time he’ll get there. So you’ve got an inexperienced QB taking on an elite D. Me likey.

Cox: Which means it will probably be a 48-45 shootout.

Scott: Yeah, they are already two OSU heros, but this could further that. If Taylor Cornelius would’ve won 2018 Bedlam, he would’ve been able to open a business in Stillwater that would always be successful. This is just one of those games.

Cox: And if Spencer puts up 400 total yards and three scores in a Bedlam win, they will build him a statue before Barry.

Boone: If you had to pick one player — offense or defense — who you think may make a big impact but may not be at the forefront like Chuba, Tylan, Spencer, Trace, who is it?

That’s not exactly a hot take cause he’s been balling.

Scott: I’ll go a little off the grid and say Tyler Lacy. He’s been quiet good all season.

Cox: That’s a good one. LD has been a different animal running the ball than he was last year. Even if his numbers don’t jump off the box score.

He owns some of the most impressive 10-carry, 35-yard games ever at OSU.

Boone: He has been a home run threat this season in ways we expected Chuba would be. But it’s crazy because, like, Chuba is still just as lethal as a runner.

Scott: I half wish LD would’ve stayed No. 7 because of the Tatum Bell comparisons with them both being from DeSoto.

But No. 0 must work wonders for the guy.

Cox: Whoa, inside baseball. I never made that connection!

Okay, we’ll save our predictions for next week but answer this question: OSU wins if…?

Scott: I’ll say OSU wins if the Cowboys’ offensive line has an above average game. Doesn’t need to be great, but good would go a long way.

Cox: I think it comes down to dueling Spencers. If Rattler has more TOs than Sanders, OSU wins.

Boone: Yep. Funny enough, I suspect neither fanbase is overly confident in their respective Spencer coming into this game.