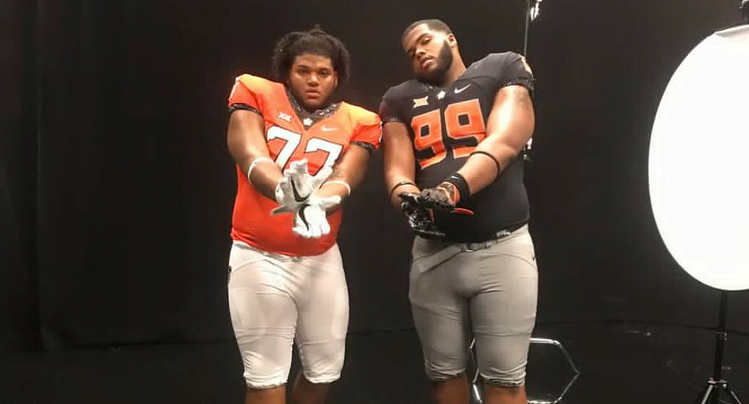 Among the handful of 2018 blue-chip prospects Mike Boynton is targeting, point guard Elijah Weaver – a four-star, top-40 prospect – is one of the biggest the Pokes are still in the mix with.

Weaver, an Oldsmar, Florida product, has 25-plus scholarship offers from the likes of Villanova, Louisville, Ohio State, Arizona, and others. But he says OSU has caught his eye since Boynton took over.

“I am intrigued by the coaching staff,” Weaver told MakePlayz.com recently. “The coaches there were Breakdown guys too and that is my AAU team, Team Breakdown, so I think our relationship is good and it just grows everyday being that they know my AAU coach.”

Weaver says he’d like to visit Stillwater in the near future and plans to narrow his list soon to “about five or six” of his top schools. Ohio State, Florida and Villanova will be on the list – and it seems OSU is working overtime to try and join them.

Louisiana safety target Israel Mukuamu, a Bossier City product, says he plans to drop a list of his top schools on Friday. The three-star prospect will likely name Oklahoma State among his schools after an enjoyable trip to Stillwater a month ago.

“I liked it a lot because it’s a college town, the town is surrounded by the school,” he told Pistols Firing after his visit. “I like it a lot. It’s very quiet there so I’ll be able to focus a lot. I like the coaching staff a lot. They’re very serious about me, and they’re just great people.”

At nearly 6-5 and 190 pounds, Mukuamu has drawn Tre Flowers comparisons from the coaching staff with his range in the secondary and long, athletic frame.

Mukuamu says he talks with Parkway alum Keondre Wudtee regularly – a connection that could pay dividends for the Cowboys. But the competition figures to be stiff. Among those vying for his services are Florida, Ole Miss, Florida State, South Carolina and others.

During an unofficial visit this weekend, Klein Oak 2018 offensive guard prospect John Bolding picked up an offer from Oklahoma State.

Bolding, whose offer list included small schools like Stephen F. Austin, Prairie View A&M, McNeese State and FIU, could be part of a packaged deal the staff is working on. He happens to be the younger brother of four-star junior college defensive tackle target Tayland Humphrey, who also visited this weekend.

Humphrey tweeted out this week that he would only be taking official recruiting visits this fall to schools that offer both him and his younger brother, and after the visit and offer to Bolding, he tweeted this and later added he was “thinking of committing soon.”