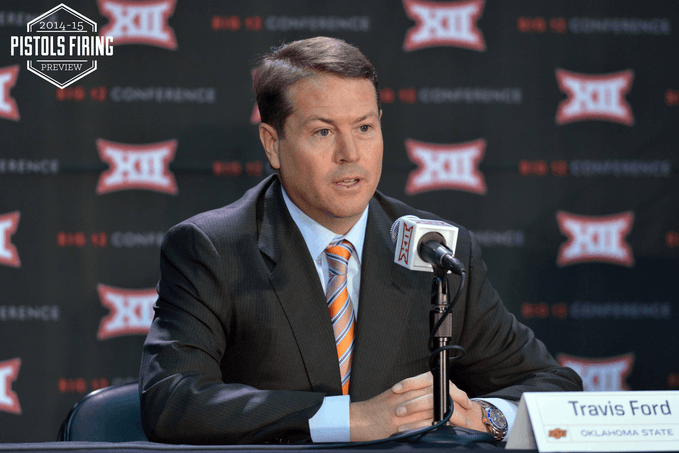 Don’t look now but basketball is just over two weeks away as OSU tries to erase the memories (well, except that one with Kansas in GIA) from last season and build upon one of the most underappreciated players in school history (but we’ll get to that).

I have questions for now — a lot of them in fact — and I’m not sure we’ll know the answers in full for a few months. If Travis Ford and Co. can answer them positively, though, I think OSU could be in for a good season.

1. What is Le’Bryan’s response to being “the guy”? I have high hopes — somehow he went from being the most overrated player in the country to one of the most underrated — but he also thrived being second and a half banana to Marcus and (sometimes Markel).

Can he emotionally (and physically) handle being the dude throwing the team on his back in a late January game in Hilton? I’m optimistic but it’s a huge question mark.

2. What will the Anthonys bring to the table? Anthony Allen and Anthony Hickey bring an inside-outside presence to this team. Hickey will get more accolades but could Allen play Russell to Cobbins’ Chamberlain? I hope so.

“I started to get used to where guys were going to be at, especially Phil (Forte), he’s probably gotten me my most assists already,” said Hickey. “Finding people is what I do best, and I’m just trying to be a good point guard.”

Travis Ford is equally excited about him.

“He’s one of the best point guard defenders I have ever coached,” Ford said.

I’m also fascinated to see what kind of personality Hickey brings to the table. Teams almost always take on the personality of their point guards (especially when your best player is Le’Bryan) and Hickey has a chance to hit reset on this team’s swagger.

What has changed that will allow these guys to win away from GIA? Especially considering the fact that the rest of the Big 12 has gotten better.

4. How much of a difference will Cobbins Chamberlain really make? There are basically two camps here. The first is that Cobbins is a rim-protecting game-changer that would have been worth 4-5 wins and could have changed the trajectory of OSU’s season last year.

The second is that Cobbins and Andre Williams have the same career stats.

Hopefully the truth lies closer to the non-Andre Williams camp (sorry, Andre, hope you’re still ballin’ at the Colvin) because if so then OSU could probably improve on its No. 37 national ranking in defensive efficiency (KenPom).

Though without Marcus and Markel (an elite defender and a very good one) I’m dubious.

5. Can Phil Forte top Keiton Page’s 267 threes taken in a season? I’m kidding, I think, but I’m curious to see what Forte’s role is this season. He’s a tremendous piece but not a tremendous centerpiece.

Thankfully with Nash he won’t have to be…yet…I don’t think.

6. How much Ewing Theory is in play? I wrote in the Roundtable on Friday that it’s seeping from the floor under GIA but I’d feel much better about it if it was only Smart who had left and not, you know, 44 percent of our points scored per game between him and Markel.

Travis Ford said something pretty interesting in his media day press conference and he said it about six times.

I’m not sure why he felt the need to keep repeating that and if it had to do anything with last season but Phil Forte seconded the sentiment.

“It was an interesting year to say the least,” said Forte. “I think we learned a lot, just that whole year off the court took us away from what we should have been focusing on the court. We’ve learned, the coaches have learned, the team has learned that we can’t let any distractions come within this basketball team and affect us.”

Am I reading too much into this? Probably definitely but don’t downplay the fact that how much dudes get along can wildly affect how college teams perform and nowhere more so than in basketball.

7. Who are the seventh and eighth guys? Heck, who’s the sixth guy?

This bench has more question marks than a freshman english composition paper. Will Joe Burton get minutes? Jeff Newberry has hops but will he know what to do in a Big 12 game at Allen Fieldhouse?

Can The Clip really shoot well enough to live up to being nicknamed after a weapon? Do you believe in the 39th straight season of “no…really…we promise…Marek Soucek definitely improved this offseason.”

All of this and Christien Sager might still be your first guy off the bench (although I’d bet on Newberry).

8. Will James Dickey affect the attitude of this team? This is where we’re at. We’re wondering if an assistant coach can change the attitude of a team that’s made the tournament each of the last two seasons.

Cobbins backed up what Ford and Forte said earlier about a different team this time around without Marcus, Markel, Kamari and Mason Cox.

“This is pretty much a whole new team, and we’ve bonded as quickly as I’ve ever seen a team bond,” said Cobbins. “Moreso than the past four years that I’ve been here, and that’s something I really like to see.

I wonder how much of this has to do with Dickey returning. Is he providing stability to what seemed like a really combustible situation last year? I hope so.

9. Is Leyton Hammonds the next Terrel Harris or the next Onye Ibekwe? Hammonds is the x-factor for me. If he plays like, say, a honorable mention All-Big 12 guy then OSU has 85 or 90 percent of what it had in Markel.

Couple that with Chamberlain, Nash, an improved Forte, and Hickey and you could have something.

That’s how freshmen are supposed to act — even good ones — and he showed enough flashes that I’m intrigued. The only thing that worries me is that if he was that good then shouldn’t have locked down that fifth starting spot already (see bench issues above).

Somebody remind me that I wrote this when we’re 10-16 in February.

10. Is this it for Travis Ford? The big one. If OSU misses the tournament you have to think it’s going to be close.

For his sake, for the sake of this team (which I secretly like quite a bit)[1. I guess it’s not a huge secret now if I’m writing it on this site.], and for the sake of GIA I hope he pulls a Doc Rivers in Boston, re-makes his career, and turns March orange once again.