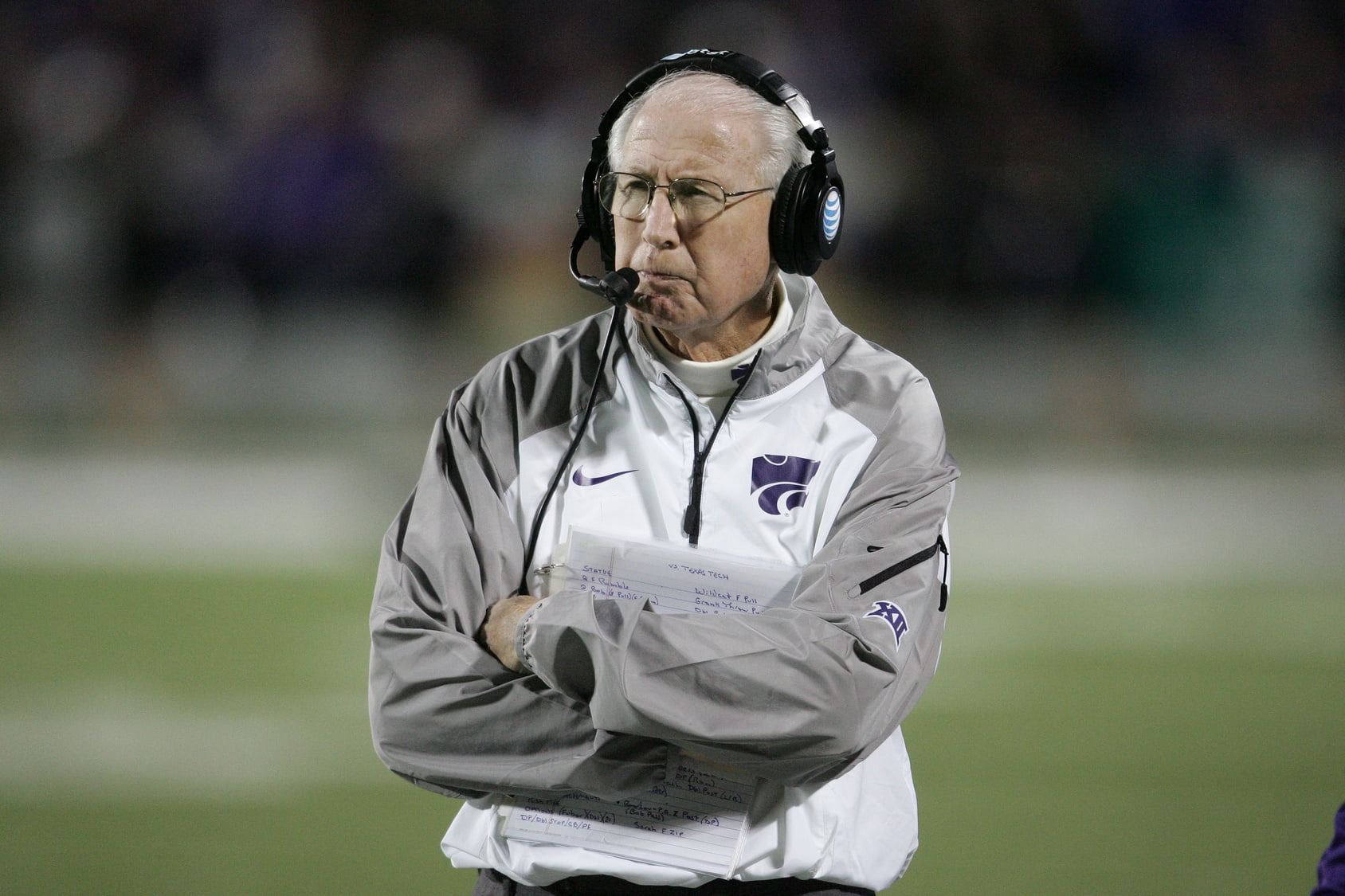 Would you trust this man to take the SAT? (USATSI)

1. Is there an equivalent in any other industry to Bill Snyder?

Porter: Morgan Freeman — Not the most decorated or the most hyped but you know what you’re getting and both rarely have down years (KSU’s 2004 is Freeman doing Dolphin Tale 2).

Dave: Warren Buffett. Success built on discipline, universally respected, achieving at the highest level at an age where many have hung it up.

Nolo: Steve Jobs. They both basically built K-State football and Apple from scratch and made them into viable contenders, then had a hiatus (Snyder retired while Jobs was ousted as CEO) before making triumphant returns which led them to the top. K-State achieved a No. 1 ranking and Apple became the most valuable company on the planet.

Ames: Maybe Paul McCartney. Got the ball rolling at a young age (that might be the understatement of the century), and has had continued success well into his later years.

Amilian: Michael Dell: Stepped down as CEO of Dell in 2004 and took the position back over in 2007. Snyder retired in 2005 and came back in 2008. Both returned to run what they created after three years off the throne.

Carson: Mr. Rogers, who was on TV 33.5 years. It’s Snyder’s 23rd at KSU and both are soft-spoken educators. Substitute the sweater for a Holiday Bowl windbreaker.

2. Who’s your favorite defensive player on this OSU team and why?

Porter: I have an affinity for Ramon Richards. Mostly because OKC Dave and I sat together watching his first few plays as a college athlete and said to ourselves “the hell is Ramon Richards?” And I think he’s going to be really, really good.

Dave: Peterson because he’s the only one I feel like we can 100% count on against the best player on another team.

Nolo: Kevin Peterson. I feel like he’s been the most consistent.

Ames: I’m going with Sterns. His first year as a starter, and he’s getting it done at a high level.

Amilian: Tough choice between Ogbah and Peterson. I’ve always loved having a good DB, but give me the sack monster on the D-line.

Carson: I said Ogbah was the team MVP weeks ago and he’s playing even better now. Best DE since…? Jason Gildon (1993)?

Boone: Josh Furman. Dude was virtually a special teams player at Michigan and he is my MVP this season so far.

3. What are you rooting for to happen the rest of the Big 12 season (ie: Dana in the Playoff, five-way tie for first etc.)

Porter: Five-way tie. I want to see Bob Bowlsby handed an @Big12Refs hat from which he has to draw a team name as the conference champion. Perfection.

Dave: K-State conference title. Snyder deserves a shot at the big one.

Nolo: I want to see TCU run the table so we hopefully have a non OU/Baylor Big 12 team to root for in the playoff

Ames: I’d like to see TCU win out, make the playoff, and beat an SEC team because I know they can. I wouldn’t mind a Bedlam win either.

Amilian: An OSU victory in Norman.

Carson: WVU-TCU tie for the Big 12 title, Meacham and Dana do keg stands at Boone’s house.

Boone: I want  TCU to make a run into the playoffs, and a Bedlam win would be a bonus.

Porter: The Plumlees. It felt like there were hundreds of them. Least favorite: Hansbroughs.

Nolo: Other than the Cox brothers? The Graham brothers. I can’t imagine what it would be like to play a major role on an OSU Final 4 team with my brother. That’s the dream.

Ames: Off the top of my head I’ll go with the Hollidays. Tom was here for so many years, Josh has rebuilt the program, and even though Matt never went here it seems like he did.

Carson: Watch this. The last 30 seconds are spellbinding:

Boone: Going with the Grahams too. That team was extremely fun to watch.

5. If every football/basketball coach in the Big 12 took the Wonderlic, who would score the highest (this is where 6-6 football seasons get us re: these questions…)?

Porter: Not Gundy. Snyder handling a scantron would concern me as well. I’ll go with Lon Kruger unless Travis Ford was administering the test…then I’d go with Self.

Nolo: Since the Wonderlic test is the more of an IQ test than anything, I have to go with Bill Snyder and Tubby Smith. They both seem to be well-respected and intelligent.

Dave: I feel like Fred Hoiberg would be a sneaky pick to claim this prize. On the other end of the spectrum, here’s Scott Drew when you ask him that SAT question about two trains meeting:

Amilian: Some might say Snyder but the Wonderlic is timed and Bill seems like a guy who takes his time on tests. I’ll stay in Manhattan and go with master’s degree holder, Bruce Weber.

Porter: OSU baseball in the 1980s. We went to Omaha every year from 1981-1987 and snagged two of the five best college baseball players in history. The stories, they must be bountiful.

Dave: Ryan Minor not being offered a basketball scholarship because Tom Holliday didn’t want to offer a scholarship to his brother Damon to play baseball. The same Damon Minor who would later play 1B for the San Francisco Giants. Ryan Minor, an OSU fan in high school, could have joined the 1994-95 OSU Final Four team with Reeves, Rutherford, etc.

I have the script ready if you want to pitch it to ESPN with me.

Nolo: The 2011-2012 school year. Between the crazy offensive numbers put up by our best football team ever and the plane crash that took the lives of our two women’s basketball coaches, a team that ended up winning the NIT, I think it could easily be made into a documentary.

Ames: I think the Smith lineage in the wrestling program would be pretty cool. John, Leroy, and Pat, Chris and Mark Perry along with John’s other nephews, and Joe Smith coming in next year. I feel like there are some interesting stories to be told.

Carson: Prentiss Elliot: The Boz if it was Rated R. A sad tale of a player who Mike Gundy says was better with the ball than Barry Sanders. Just imagine his high school tape.

Boone: Rashaun Woods. How he was a star at Oklahoma State to an NFL dud.

7. How badly did you want Weeden2Dez to happen on Monday night?

Dave: Almost as bad as Jerry Jones wanted Romo back in the game.

Nolo: Weeden2Dez with Joe Randle in the backfield and Bailey kicking the PAT? I’d be ok with that. It’s astounding how many players with Texas/Oklahoma ties play for the Cowboys.

Ames: It should’ve, I can’t believe Dez dropped that slant.

Boone: Almost as bad as Weeden wanted it to happen. He wasn’t even looking at anyone else but Dez.

8. What are you most looking forward to about basketball season?

Porter: The Ewing Theory potential is seeping from the doldrums of GIA onto Hall of Fame Street. Of course Travis Ford has sent his assistants to go clean it up.

Dave: I really am fired up to see how much better Nash can get in his senior year — if he’s anything like his half-brother, we’re in for a treat.

Also, Cobbins for his play and for this:

Ames: I want to see if this team can channel the uncertainty into some sort of momentum during Big 12 play, and make the tournament.

Carson: Watching a team play free of expectations and pressure. And the potential Ewing Theory.