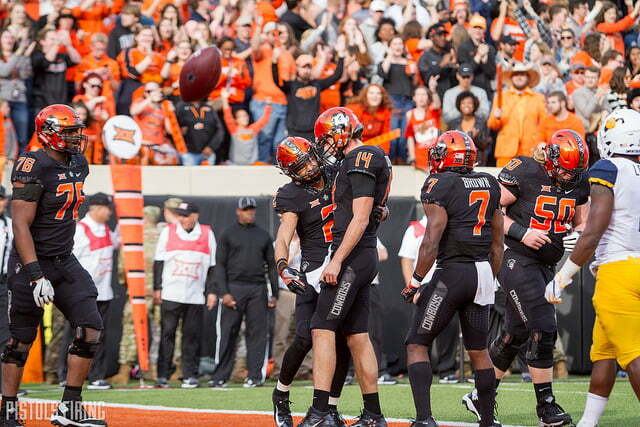 The final football game of OSU’s regular season is here, and the Cowboys are in Ft. Worth taking on a TCU team looking bowl eligibility in their final game. OSU remains a narrow 4.5-point favorite, but I’m not sure anyone (including Mike Gundy?) knows what to expect.

Anyway, here are 10 interesting things I pulled out of the game notes while poring over them in preparation for this tilt.

4: That’s how many coaches have more wins with their current school than Mike Gundy (120). Gary Patterson is one of them (Bill Snyder, Kirk Ferentz and Nick Saban are the others … and Dabo is coming in hot).

167: If Corn can figure out how to eke out 167 rushing yard over the final two games of the year, OSU will have three (!) 500-yard rushers on the season. I wonder how many times that’s happened in Big 12 history.

23: I’ve avoided this one all season because I haven’t wanted to jinx it, but following his career best game against WVU it warrants mentioning. Dillon Stoner has a catch in 23 straight contests, which is (obviously) the longest streak of any WR currently on the roster.

Justice needs 70: If Justice plays and rushes for 70 yards, he joins this list of Big 12 players that have posted three 1,000-yard seasons.

3,461: That’s how many passing yards Corndog currently has. If he puts up 631 in his last two games (which seems reasonable!) only Mason Rudolph’s 2017 season and Brandon Weeden’s 2010 and 2011 seasons will be ahead of him in the record book for most passing yards in a single season. ?

6: TCU has scored fewer than 20 points six times this season (six times!) and somehow won three of those games. That would be great news for OSU, which is 56-0 under Gundy when holding an opponent to under 20.