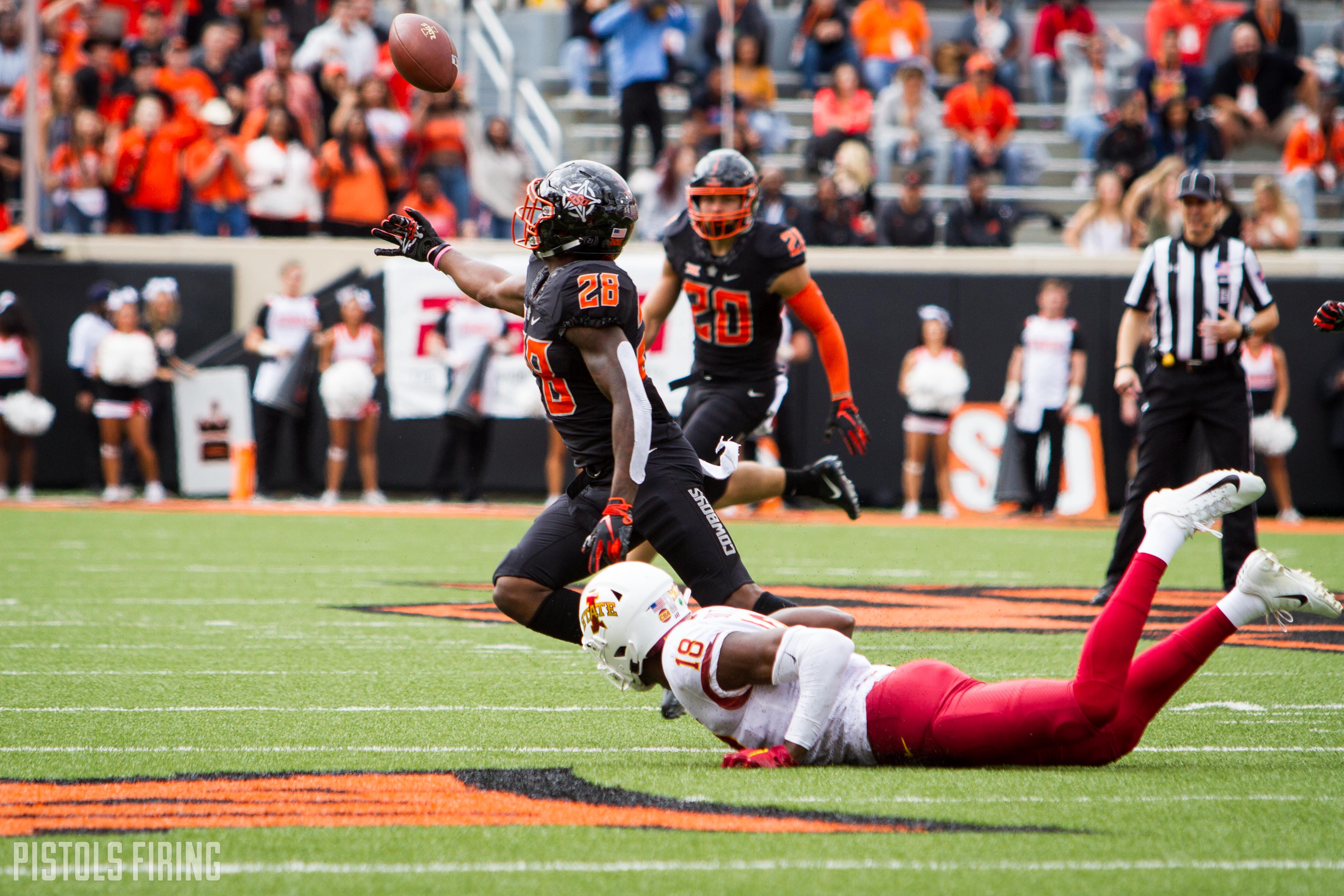 Oklahoma State got run out of the gym (even though the 48-42 final didn’t show it) on Saturday by 1-3 Iowa State as Mike Gundy and the Pokes dropped their fifth Big 12 game at home in their last seven tries. Let me repeat that. In their last seven Big 12 home games — TCU, Baylor, OU, Kansas State, Kansas, Texas Tech and Iowa State — the Cowboys have just two wins (over Kansas and Baylor).

That’s not good and neither was what took place in Boone Pickens Stadium on Saturday afternoon. OSU got off to a strong start by scoring on their first possession and holding ISU scoreless on their first two. But a botched punt led to ISU scoring TDs on five of their next six as a — surprise, surprise! — freshman QB took the reins for ISU, and it was more or less over from there.

It’s Oklahoma State’s first loss to the Cyclones since The One That Shall Not Be Spoken Of and its first home loss to ISU since, gulp, Bill Clinton’s last year in office. We’ll get to the 10 Thoughts but first our sponsor.

1. Not Either/Or but Both

Two things can be true at the same time.

1. Oklahoma State’s offensive line is a sieve.
2. Taylor Cornelius, knowing this, does not get rid of the ball quickly enough.

It’s not either/or, or it wasn’t on Saturday. OSU’s pass protection has been about as reliable as Stevie Clark staying eligible so far this year, and that bit them hardest against Iowa State.

The stats are staggering.

The offensive stagnation wasn’t quite as bad as it seemed either (OSU scored 2.6 points per drive which is ok, not great). But when it went south, and it often went south, it was on both parties. And neither ever could quite figure it out.

I don’t really think it lost them the game — and maybe I’m just so far gone that I don’t know how reality functions — but it sure looked like Oklahoma State was the much better team over the first few series. Iowa State looked inept offensively and OSU was flying around all over the field.

And would you believe me if I told you the whole thing turned on a dropped punt by Zach Sinor? That seemingly took the life out of OSU early, and Iowa State would never look back. With teams like Oklahoma State it’s the little things — it always has been and, until Marcus Arroyo comes back to become Chief Recruiting Officer, it always will be.

Margins are so thin, and I thought OSU let Iowa State off the hook and allowed them to take charge of a game when the Cowboys could have put them on their backs early. So … almost every non-OU loss of the Gundy era.

Then the whole thing nearly flipped again when Iowa State made a special teams error, albeit a much less egregious and accidental one,  that led to a Justice Hill touchdown. That’s how it goes in CFB, especially for teams like these.

In his post-halftime interview, Iowa State coach Matt Campbell told ESPN that his team needed to, “Play and win with detail.” I liked that phrase, thought it was smart and think it’s something OSU has gone away from in recent years.

I’m not saying Brock Purdy won’t go on to be a great QB, but come on. He was making throws Brandon Weeden would have raised an eyebrow at. It was the Taylor Martinez Game all over again!

That’s not to say OSU was sound defensively or anywhere close to it (we’ll get to that), but at some point you just have to laugh at what backup, third-string, fourth-string and even multiple WRs have done behind center in the last few years. I have zero doubt OSU is last in the country in passing yards allowed per depth chart rank in the last decade. None.

Also, as Marshall Scott pointed out in our Slack today, how thick is the irony of two true freshmen coming into Stillwater and winning in Gundy’s dish this year, you know, given Oklahoma State’s current QB situation?

The thing I kept waiting on all game was for somebody to absolutely pop Purdy. Rattle him. Shake him up. Anything. If you’re going to get a bunch of penalties anyway (OSU had 9 for 87 yards), that’s one that would actually help you!

For the second straight week, Landon Wolf was an offensive force. I’m not here for the “OSU doesn’t even need Jalen McCleskey!” talk, but you’re getting at least 85 percent of McCleskey’s talent and production from Wolf, right? On an offense with (allegedly) this many weapons, that should be more than enough.

He finished with 6 catches for 67 yards and a TD on eight targets, one sick pylon dive and this “I ain’t scared” walk back to the huddle after getting smashed. /subscribed!

I know they got a Freshman QB Injection, but Iowa State came into this game having scored 70 points in four games. They fell just a couple of TDs shy of reaching that number in 60 minutes against OSU. They were last (LAST!) in the country in total TDs coming in with just seven. They scored six on Saturday. They came in averaging 1.6 points per drive. They averaged 3.2 on Saturday.

ISU's 30 points in the first half is the fourth-most points in a half in a road game in school history. #WinInTheDark

Giving up 41 to Texas Tech at home is one thing, but giving up 48 to an Iowa State team that had yet to crack 30 all season when you knew you had to have this one is an entirely other thing. Lots to discuss in the week to come, but this is what kept rolling through my head on Saturday afternoon … 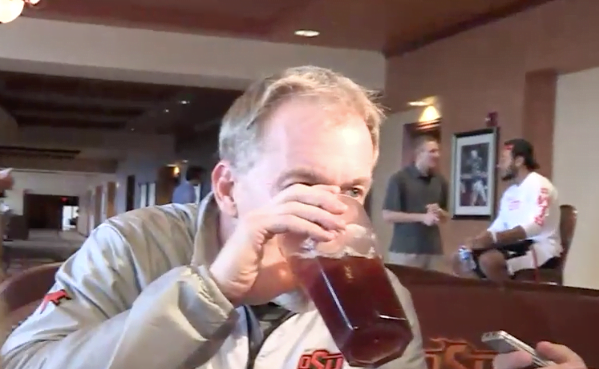 Was Cornelius good? Not really. The hard part for me — and I mentioned this earlier in the week — is that he makes some absolute throws but isn’t consistent (I can see how he would look great in practice).

He doesn’t adjust that well to the fact that he has less time or more time. He doesn’t bring much energy to the table. He just kind of looks like an average quarterback behind an offensive line that isn’t helping him.

He got the full Daxx Garman 2014 Experience in this game — Iowa State had seven sacks after coming into the game with six total (!) on the season — and a Spencer Sanders-Dru Brown conjoined super QB couldn’t have withstood the pressure he saw. This doesn’t mean I’m pro-corn (I’m not). It’s just part of the reality of what happened on Saturday.

7. Maybe They Can’t Run Either

I’ve been saying all year that OSU actually can run the football even though Gundy thinks they can’t. They tried to prove me wrong on Saturday.

Also … where is J.D. King? He has six total carries in the last three games including zero against the Cyclones.

8. Here Is a Summary

If you missed the game or were unable to watch for some reason, here’s is a very fitting and ackrut summary.

The most shocking part of the entire day is that OSU actually had a shot to take the lead in the middle of the fourth quarter. We always frame Ws differently than Ls so I’m curious how we would have talked about this one if Tylan had held on and OSU would have gone on to win.

9. Swagger From the Top

I’ve mentioned this multiple times so far this season, but where are the “we are not losing this game” guys on this team? Calvin Bundage and …. Tylan Wallace (?), Jordan Brailford (?). Maybe the team just isn’t that good and I’m projecting this, but it doesn’t feel like they have any dudes at the top of the hierarchy that have that infectious swagger.

This might especially be true of the offense. Like, I don’t think they don’t care, but it just feels like everybody is doing their own job, staying in their own lane and isn’t really knitted together as a unit. Again, I wouldn’t be saying this if they’d scored one more TD today (or maybe I would), but that’s the feeling I get when I watch.

To be clear, it’s a good thing that Oklahoma State has a season that sticks out as much as 2014 does. They went 7-6 that year, went to a bowl game and hit the reset button on the program. The fact that that was (by far!) the worst season of the last decade and that we compare every potentially bad season thereafter to it is good.

And I’m not saying that 2018 is 2014, but watching Justice make crop circles in the backfield, seeing TC run for his life and watching OSU’s DBs watch Iowa State’s receivers run toward the jumbotron certainly gave me flashbacks.

Bad seasons happen of course, and this one might turn out better than it feels like it’s going to. BUT when I think about 2014, I often think about how things could have gone differently if Gundy hasn’t been forced to play Mason Rudolph at the end of the year. The next six games are going to be intriguing in an unfamiliar way because now you find yourself in a situation where November won’t matter as much as prepping for 2019 and beyond.