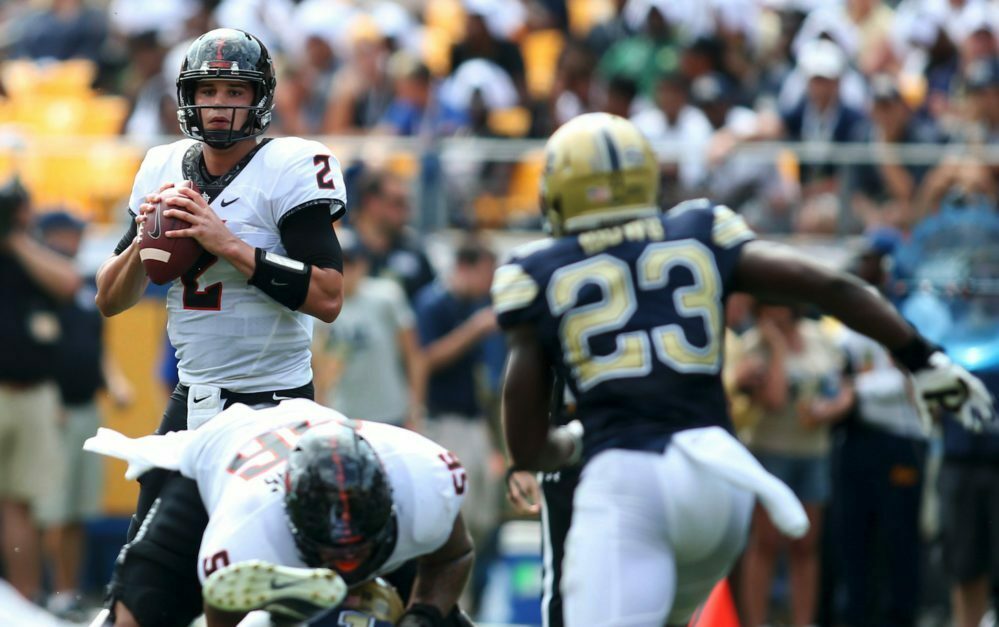 For the second week in a row, the 10 Thoughts are brought to you by 1907 Meat Co. Unfortunately the 1907 Meat Co. does not specialize in hosting websites and we are sorry that our site was down for a bit after the game. They do make some tasty food, though, and you should check them out. ?

Oklahoma State torched Pittsburgh 59-21 on Saturday at Heinz Field in its most impressive showing of the season thus far. The Pokes scored on their first seven possessions, and Mason Rudolph was dialing up his Murphy’s order halfway through the third quarter when the starters were removed.

It was a record-setting day for the senior QB as he threw for 497 yards and 5 TDs on just 32 attempts. His 423 first-half yards broke his own school record (set against Pitt last year) of 372. So if you’re scoring at home, that’s 1,037 passing yards (or 1/3 of Bobby Reid’s career) for Rudolph against Pittsburgh in 6.5 quarters of play over the last two years.

Despite some gaffes late, the OSU defense also played really well against a Pitt team without an identity at quarterback. They racked up two sacks, two interceptions, three TFLs and six QB hurries en route to the victory. The Panthers were pretty clearly overwhelmed throughout the day, and had fewer answers  for the Pokes than Jermaine Gresham taking the ACT.

“That’s about the worst day you can have at the office,” said Pitt coach Pat Narduzzi. “As I said to Coach Gundy after the game, ‘you certainly have a top-10 team.’ That’s a good football team. That’s a top-five football team for sure.”

Things got so bad that at the start of the second half Pitt students were offered a “free beverage” for staying until the end of the game. Pitt football, ladies and gentlemen!

This week, Oklahoma State needed just 19 minutes to surpass Penn State’s numbers from last week. They put up 516 yards and 49 points by halftime, and the second period was (literally) a snooze-fest.

Here's the second half recap of this #okstate-Pitt game. pic.twitter.com/uuaZZnqUIn

Rudolph did not complete a single pass to either of his two most explosive receivers until the score was already 21-0 in the second quarter. James Washington, because he was not targeted. Tyron Johnson, because he did not make the trip to Pittsburgh. Still, four (!) OSU receivers ended the day with 100+ yards, which has only happened twice in college football in the last two decades.

With Rudolph wearing down a Pitt defense that was already one of the nation’s worst in yards per play allowed, I think you may have been able to touch 200+ with three or four guys if the starters would have stayed in the entire game.

Oklahoma St is 1st FBS team with four 100-yard receivers in a game since Texas Tech in 2005 vs Kansas St (Watch: https://t.co/i38RAqWLev). pic.twitter.com/cbAYUD2QAk

Oklahoma State’s 572 passing yards fell just short of its all-time record as a team (574 against Tulsa in 2010) and for the third straight game, OSU saw someone different star at wide receiver. Jalen McCleskey had seven catches for 162 yards and three TDs (more on him in a minute). The wealth is abundant, and Rudolph a kingmaker. Bag years for all.

I saw the words “better Joe Randle” in my texts during the game. I’m not willing to go there quite yet, but it’s pretty clear that Justice is a superstar. The USA game appears to have been a one-off, too, as he went for 91 yards on just 11 carries and tossed in a pair of touchdowns against Pitt. Heisman contender Saquon Barkley averaged 4.3 YPC last week vs. the Panthers, and Hill doubled that this week.

This move in particular was reminiscent of the first half against Tulsa. Watch the first defender whiff.

4. Some Love for the Defense

OSU has given up 38 points so far this season on defense (along with two special teams gaffes that turned into TDs for 52 points total), and most of that damage has been done with the twos in. I know Tulsa, USA and Pitt are not exactly a murderer’s row of points per drive specialists, but they’ve proven, I think, in 12 quarters that they’re good enough (with this all-time offense) to win a Big 12 title and possibly more.

It started up front again on Saturday as The Blizzard moved like no big man should ever move and put Max Browne on his butt.

Oh baby, a big man ain't supposed to move like that. pic.twitter.com/lpOPnuQgcZ

I would like to take this time to announce that Justin Phillips has been defeated by USA and Pitt (combined) 28-14. He put up a good fight and hung tough until the very end. No. 19 was valiant even in defeat.

Phillips also had four solo tackles and a pass breakup on Saturday.

Rudolph did not play the 4th quarter against Tulsa or USA, and he came out halfway through the third against Pitt. So he’s averaging ~505 yards and 5 TD per four quarters thus far this year. That seems good.

Mason Rudolph has played 8.5 quarters this season (no 4th in first 2, out mid-3rd here).

We should also note that he set a new school record of 216 attempts without an interception before throwing one in the third quarter today. Additionally, I went back and looked at his last 23 games since throwing three picks at WVU his sophomore year (remember that mess?) He’s tossed 51 TDs and thrown just 7 INT since that game.

Rudolph has always been really good at avoiding sacks and making good check-downs, but he seems to have improved on his accuracy this season. Sure, there are still some misfires, but that 72 percent number is a Weeden-like figure through three games. Also, this is a big boy throw (and catch).

Greg McElroy: “You don’t see that every day. Not on Saturdays at least.” pic.twitter.com/YYe4ccKFe9

It felt like Mike Yurcich kept calling in the same play, turning his mic off, and loling by himself in the press box. Pitt was so concerned about eliminating James Washington from OSU’s plan that it completely forgot about Jalen McCleskey. So Yurcich called the McCleskey Post (a subsidiary of the Washington Post) and Rudolph hit it over and over again. Easy money.

I saw some folks on Twitter calling for OSU to hang 70 or 80 today, which they probably could have. My question: Why? What is the purpose? The only subjective outside opinion that matters is the College Football Playoff committee’s, and if they’re breaking down OSU games in late November then they’ll be vigilant enough to see that Rudolph had his arm around Rob Glass for most of the second half here. No, the mark of a great team is seeing how early it can get its starters to the bench. Conserve knees and prolong seasons.

That’s the difference between this year’s squad and the last two. In 2015 and 2016, Oklahoma State was a really good football team led by a really good quarterback. In 2017, it has become clear that this is one of the best teams in school history led by a potential Heisman trophy-winning QB. I pointed this out after Game 1, and a lot of folks crushed us. “It’s just Tulsa” they cried. I hope it’s obvious now: This team is elite.

After three games, I have two medium-sized to big concerns. The first is how much pressure Rudolph has seen. This has been an issue his entire career, and I don’t think it’s because he holds on to the ball too long. Rudolph getting thumped by Big 12 linebackers is bad for many, many reasons, and OSU QBs were hurried 11 times on Saturday against the Panthers. That led to Rudolph’s best Houdini impression yet, but I’d rather see him be able to celebrate in peace rather than with a mouthful of NFL turf.

The second issue that I saw on Saturday was that if you have physical receivers you can sometimes overwhelm OSU’s corners. OSU has speed out wide on defense, but I’m not sure it has power. Pitt hit them out wide, and the corners seemed like they just couldn’t hang. There is a physicality you see in the best defenses in the country (i.e. Florida State and Ohio State) that is lacking from OSU’s secondary at times. Maybe it won’t matter, but it’s at least something to keep an eye on.

We’re obviously picking nits when we complain about anything from the first three games, but these are going to be a few of the Pokes’ pressure points come October and November.

The season is 25 percent over. I think that’s the number that always hits me the hardest every season. Wait, we just started this whole thing. It’s pretty clear that OU and Oklahoma State are on a collision course for November 4 (and maybe again in December), but the road to that game is a long one.

It’s evident that this OSU team is special, and it has become abundantly clear why Gundy and Co. were swagging so hard this summer and into the fall. Teams like this, seasons like this, don’t come around all that often (especially in these parts), and it’s been a hell of a show so far.

OSU is as good as it has ever been on offense (and maybe better) and sufficient on defense that as long as they protect the ball, they’ll compete against anyone in the country. Variables in college football can change entire organizational trajectories — injuries, scheduling, weather etc. — but this team has the same look through three games as it had after the first drive against Tulsa. The look. Of a conference contender and CFB Playoff frontrunner.

Think about last year’s team. It went 11-2* and was one of the better teams in the country at the end of the year. Now think about its non-conference start. Big win, catastrophic loss and narrow win against similar teams as this year. Then it ripped off eight of its next 10 to set up all the hype and all the hyperbole. This year’s non-con slate has been a complete evisceration. Three monstrous wins to set up a the momentum for a momentous 9-game conference sprint. The warm-up is over, the appetites have been whetted and the country is watching with eyebrows raised at what could be from Mike Gundy and Co over the next three months.

Three down, nine to go.