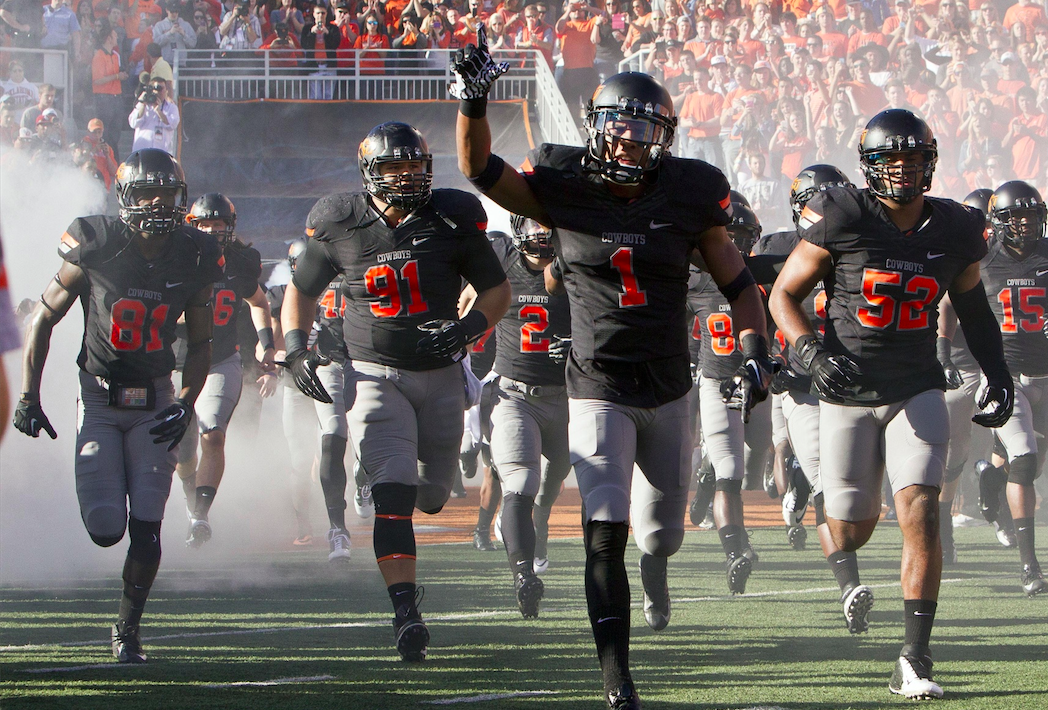 Sorry the 10 thoughts are late tonight, I just woke up from my second-half nap. No, really I went to the game and just got home. Thanks, as always, for reading.

This team, I have no idea what to do with it. Just when I think they’re starting to thump on offense, they go out and punt nine times and look completely inept for most of the game against Kansas. At home.

And yet the reality is that this team is 8-1 and 180 minutes from its second Big 12 title in three years. I want to whine and moan because the offense stumbles around like Dana after a big night on sixth street for the bigger part of four quarters but I can’t.

At some point we’re going to have to stop saying “we haven’t played anybody!” because the season will be over and it will have played every team on its schedule. That excuse (caveat?) only plays for so long.

I realize the gauntlet still awaits but tonight I’m just fine with the eighth 8-1 start in school history.

1. There are three ways to look at this game (on offense, anyway) and I think two of them are positive. 1. OSU plays up or down to its competition — that’ll play as long as it shows up in the next three games. I don’t love it, but whatever.

2. It just has its worst games against bad teams. This is more of a luck thing than it is a mental thing (like No. 1). If this is the case then that’s also fine as long as the luck skews heavily towards the end of the month of November.

The third option is that this offense is just not that good. Unfortunately I think this is the most likely of the three scenarios.

2. Did anyone think the Justin Gilbert kick return wasn’t ballgame? I did the usual things I do when Gilbert goes to the house (namely, wobbly knees, heart palpitations, et al) and Gilbert got one step (literally) closer to the all-time NCAA record of seven (he’s coming, CJ Spiller).

3. For as much as we talk about this offense I’m not sure if anyone fully realizes how elite this defense is. Here’s Kansas’ drive chart: 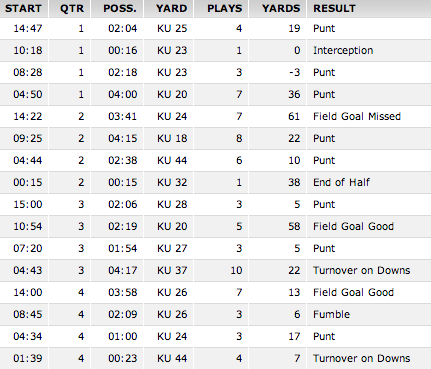 I get it, Kansas blows, but that’s the first time all year it has been held to single digits.

4. I told Amilian this on the podcast earlier this week but these last two games are who Clint Chelf is (or has been). The Iowa State game is the one outlier in his career game log. He’s going to 16-30 you for 240 and 2-3 TDs with a pick or two sprinkled in.

That’s not a bad thing at all when you look at it from 30,000 feet but man, some of those drives tonight made me want to throw up. The two biggest things that make me drop my head are the tipped balls at the line (roll him out? Drop back farther?) and the misreads on routes (more on those later this week).

All that being said he makes some pretty terrific throws in the red zone, specifically to his BFF, Tracy Moore. Both of the fades to him were really, really good throws.

5. OSU punted nine times tonight. Kip Smith has 52 punts on the season. Quinn Sharp’s last three season totals: 44, 47, and 46. That’s pretty concerning if you’re an OSU fan. Speaking of Smith, what’s the deal with the white glove he wears on punts and kickoffs?

I mean, I get it for punts, because you actually have to catch the ball, but for kickoffs? Isn’t that like putting where you take your golf glove off and just shove it in your back pocket?

6. The Josh Stewart injury is obviously an issue. Even if he’s back next week or the week after he likely won’t be 100% which isn’t good for a team that relies so heavily on his punt returning and playmaking on offense to get it into scoring position. Here’s a look at him on crutches postgame:

I’m about as excited about trying to roll with Baylor without him as Charlie Weis is about taking his squad to Souper Salad after a loss. Let’s see what we can do about getting him on one of Boonie’s planes to Germany to see Kobe’s “knee doctor.”

7. I really liked both team’s uniforms. The KU white-white helmet-top was strong but so was OSU’s black-black answer. OSU also could have gone white pants or orange jerseys and had some fun with it, too.

Speaking of uniforms, am I crazy for thinking Jhajuan Seales looks like Justin Blackmon on the field. Like, doesn’t he kind of have a lot of his mannerisms?

I’m not saying he’s as good (or will ever be as good as 81) and maybe I’m just blinded by the number but he physically looks a lot like the two-time Biletnikoff winner.

8. The loudest moment of the second half, I kid you not, resulted from a competition between the OSU cheer squad and the KU cheer squad. One OSU guy and one KU guy tried to hold their girls over their heads for as long as possible and when KU guy dropped his our west end zone crowd went bonkers.

Other than that and the Gilbert kick return, we struggled to get going (and I’m including myself in that “we”) as a crowd. The whole thing was just a total snooze-fest. Maybe it has to do with the fact that we can’t compete more than two passes in a row or maybe it’s because we run up the middle more often than a moderate at a Fox News conference.

That being said I’m kind of proud of our fans for even showing up. This team isn’t thrilling and Kansas is so horrific it would have been just as easy to stay home. The ’88 homecoming thing was strategic but people still flocked, that’s a good thing.

9. Marcell Ateman needs to go spend a weekend with Rashaun Woods and Dez next summer — as long as that’s not an NCAA violation. He’s built like a transformer but they need to teach him some little tricks (ie: the hip check and faux push off). He’s going to be a monster for the next four years.

10. One of my friends texted me this as the clock was running out in the fourth, and it’s a follow up from the lede, but 2005 us would punch 2013 us in the face for talking so much about how freaking boring this season has been.

2005 us would punt kittens to have a Justin Gilbert returning kicks and a Josh Stewart returning punts and we would do unholy things to have a defense the caliber of this defense.

It’s easy to get caught up in the Chelf-receivers rhythm thing but maybe, and I seriously cannot believe this is a sentence I’m typing, OSU won’t need its offense as much as I originally thought against Texas and OU (it’ll need its offense and potentially a cameo from the ghost of Todd Monken to beat Baylor).

Part of me worries that it will and since Chelf and the offense can’t complete three passes consecutively that could be an issue but maybe it won’t.

It hasn’t against Kansas State and TCU and Iowa State.

We’re about to find out if it will against everybody else.