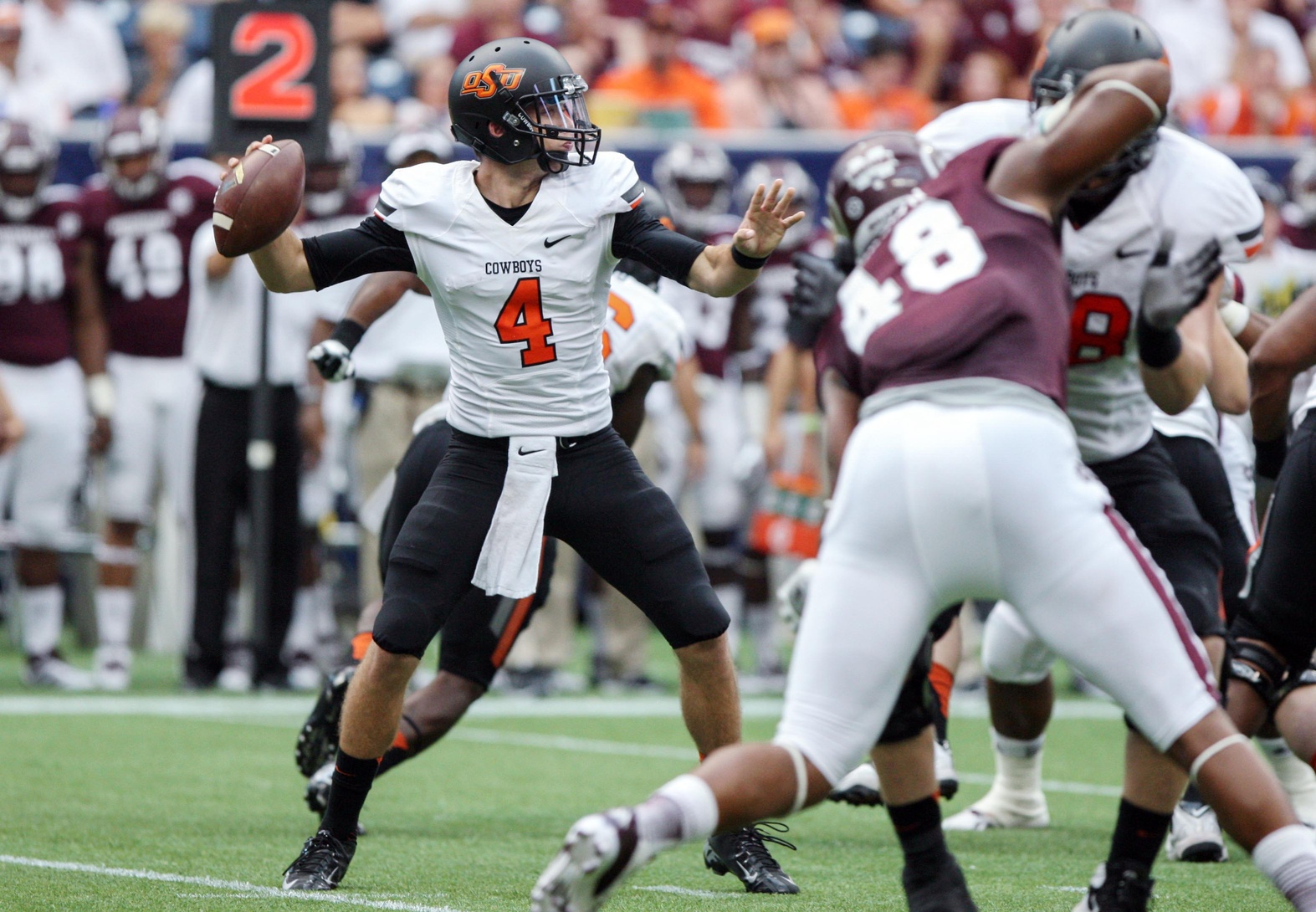 I think Oklahoma State’s first game has brought as much to talk about as any first game of the Mike Gundy era (which…great for blogs!)

It was an impressive win but not an elite one and a pretty weird game at that.

Let’s get to the thoughts…

1. It seems like I was both right and wrong about the defense. Wrong that the transfer of power from Bill Young to Glenn Spencer would potentially be a negative thing but right that this is, in fact, a pretty good defense.

You aren’t going to hold Big 12 teams to 0.27 points per game but you can triple that number and you’ll still roll through the league. Mississippi State averaged 2.16 points per drive in 2012 which is about middle of the pack in the NCAA overall and you went out and made them look like Kansas.

I was blown away by the performance.

2. I’m going to write about this more later on but man, it really feels like Gundy just pulled the string on Chelf. “You’re our starter, you’re the guy, you’ll get first-team reps…….JUST KIDDING!”

I think Gundy knew all along that the safe play was to call Chelf the guy (because, where’s Walsh gonna go?) and then he figured out in, like, the second practice of fall camp that it was going to be Walsh but he still needed a backup (Chelf). So you run Chelf out there, call some screens, do some stupid stuff, bench him. “Problem solved!”

I’m not saying Chelf was good but he he gained 21 yards in his first two possessions (two punts) and Walsh gained 27 in his first three (three punts). Gundy wanted to ride Walsh all along. I mean Chelf rolled with OU in Norman last season. That has to mean something, but apparently it doesn’t.

3. Walsh was compared to the following people during the game: Zac Robinson, Brandon Weeden, Johnny Manziel, and Aaron Rodgers. OK, so maybe not the last one but by the middle of the third quarter it wouldn’t have surprised me.

I think we need to settle down a little bit. He was excellent on the ground but you’re basically running a souped-up version of the 2007-2009 Zac Robinson offense. He threw over the middle like twice and basically just ran eight-yard outs and zone reads. Can you get away with that and still win a Big 12 title? Maybe (see thought No. 1), but we have a long way to go…

4. To accentuate No. 1 — the last time Oklahoma State held a BCS opponent to three or fewer points was when it shut OU out in 1995.

5. Not sure why we aren’t talking about it but how good was Jeremy Smith today? Last year MSU gave up four rushing performances in which a player went over six yards per carry (min: 12 carries) (one was to JohnFoots). Today: two (Smith – 6.1 YPC, Walsh – 9.6 YPC)

Smith ran like a man, too. He did everything you asked from him and, despite the bunched up formations, created space for himself.

6. The first four or five possessions made me wonder if Gundy was regretting the Yurcich hire more than Holder regrets that Boone/insurance decision. Yurcich was calling screens like he had only ever played on a 30-yard field — there was just nothing to his plan.

One thing about Holgorsen and Monken and their playcalling is that it felt like they always had the offense pointed towards the end zone. That doesn’t mean they wouldn’t go sideline to sideline, just that the general idea was to roll forward. It didn’t feel like that at any point on Saturday.

Good point by OKC Dave though: Monk only put up three points with Weeden and Blackmon in his first big boy game in 2011 at A&M. I’ll give Yurcich some time to get his legs and figure out his QB.

It’s been interesting to watch OSU adapt to different styles of play during Gundy’s tenure. You need 65 points for the win? Got ’em (Baylor). You need to grind against an SEC team and punch out a W at the end? No problem (MSU). You want to play smashmouth? Sure (Stanford). You want to run? Let’s do it (OU).

Given that Gundy’s first win in 2005 was a 15-10 uglyfest against Montana State (!) to say I’ve enjoyed the process of getting here is to say Jared Lorenzen likes croissants.

9. Boone said so many Boone things before the game. This might have been my favorite.

Pickens on his hopes for the year: "I think if you have some luck you might sweep it. But I would be disappointed if we didn't win 10 games"

10. All things being equal, Mississippi State just isn’t that good. How many SEC games are they going to win this year? One? Two? It’s a good win for OSU but I’m not sure you can project anything off of it. If you go out and hang 50 and just stroke them then OK, fine. But 21-3 is a nice, solid win over a below-average SEC team. You took care of business, you didn’t win the Big 12.[1. Though with the way some of these Big 12 teams are opening, you might have!]

11. (bonus) I realized today how much fun this program has become to cover. Granted, this might be a truism of any BCS football program (I’ve never covered another) but the combination of Gundy doing ridiculous, absurd Gundy things (I mean, look at this!), the (normally) uber-paced offense, the fun QBs, the uniforms, the (mostly) intelligent fans, and the exciting games and success OSU has had just feels like it’s one of the 5-10 most fun teams to cover and write about in the country.

I couldn’t ask for much more.

More to come tomorrow — loved spending the first day of the new season with you guys.