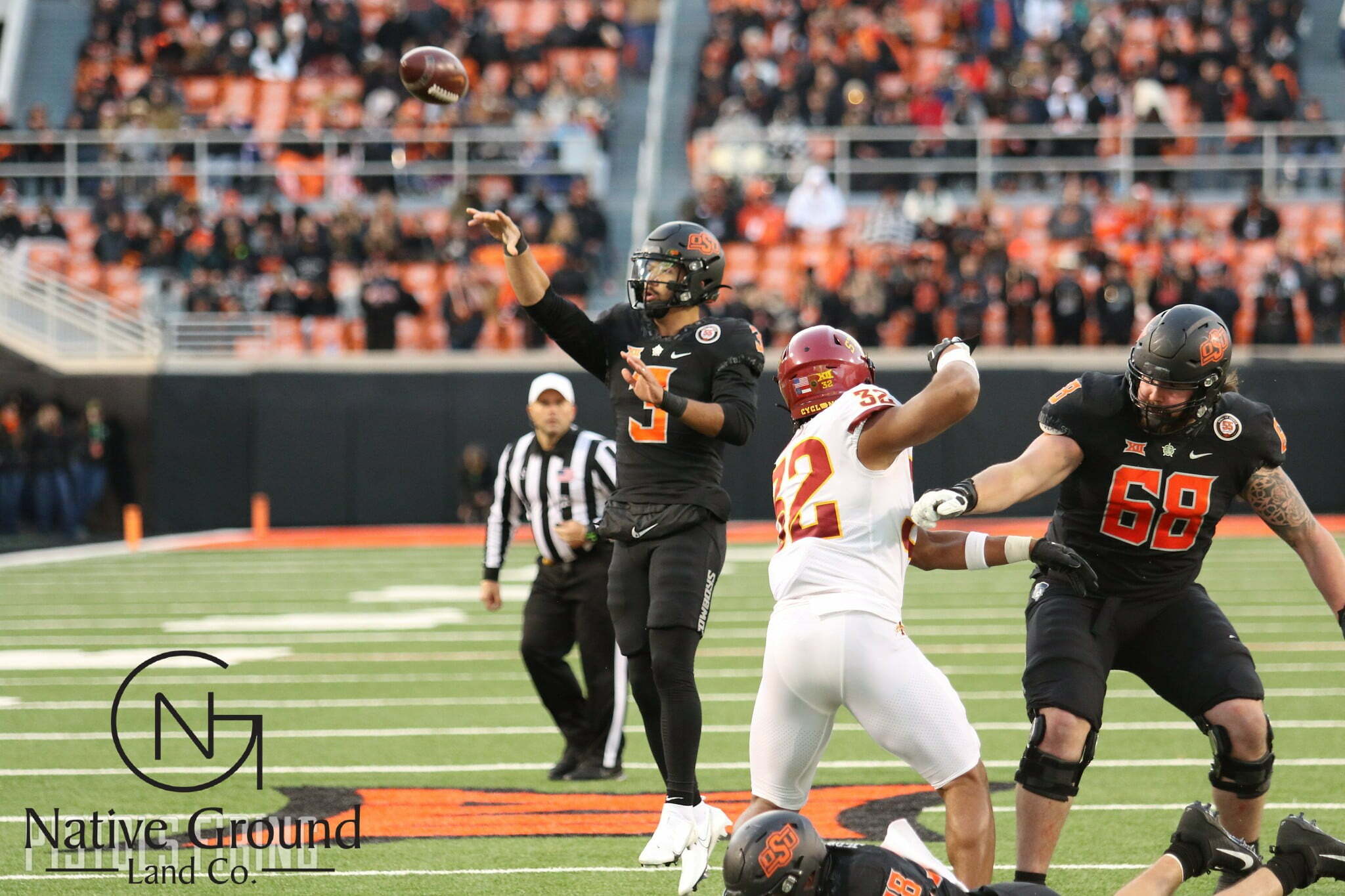 Oklahoma State defeated Iowa State 20-14 on Saturday in Boone Pickens Stadium thanks to a movie-like return from Spencer Sanders late. Here are 10 Thoughts on the game.

Having not practiced a ton over the past month, Spencer Sanders was in break glass in case of emergency mode. With OSU down 14-10 late in the third quarter to a team with only one Big 12 win, that glass broke like Stone Cold Steve Austin was coming down the ramp in 1999.

Like Mariano Rivera trotting out to Enter Sandman, Sanders provided the spark OSU needed in an eight-play, 63-yard touchdown drive on his second possession. He capped the drive off with a roll to his right that drew Iowa State’s stingy defense in before floating a ball to an open Jaden Nixon in the end zone.

“A lot of people have been saying that I came in and won the game — I really didn’t,” Sanders said. “I just did my role, and all the other 10 players on the field did their role as well.”

In a little over a quarter, Sanders was 9-for-13 with 84 yards and the touchdown. Most importantly, the Cowboys offense went from life support to at least being serviceable.

It was strange how it got to Sanders playing. Gunnar Gundy started after Garret Rangel started last week. But when Gundy’s helmet came off in the first half, Sanders trotted out to hand the ball off just to go back out of the game … just to come back in the game.

But all that matters in the end is that Sanders did play and after two woeful performances north of the Oklahoma border, the Cowboys did win.

Glenn Spencer was Oklahoma State’s defensive coordinator from 2011 to 2017 — the offensive shootout days of the conference.

Knowing the Cowboys were going to give up some yards, OSU’s defenses back then lived off creating turnovers. Spencer’s 2011 defense (co-coordinated with Bill Young) forced 44 turnovers (24 INTs and 20 fumbles), the fourth most in a season in program history. The Pokes intercepted 21 passes in 2013, the sixth-most in program history.

Derek Mason’s group forced five turnovers when it needed to get off the field. Three of the turnovers came in OSU territory. Luckily, OSU did enough offensively to win because the Cowboys scored only three points off those turnovers.

But it feels like the past two weeks, when everything was going the wrong direction, OSU’s 2022 defense was getting compared to its 2021 defense more than ever. So, Saturday the clocked got turned back to the Spencer-era, which say what you will, the Cowboys did a lot of winning in that era.

“That wasn’t the plan,” OSU coach Mike Gundy said, “but it worked out well for us.”

The Cowboys’ defense had a few playmakers Saturday, but none popped up more frequently than Kendal Daniels.

Daniels missed a tackle or two early, but from there he turned the Cyclones into the stiff breezes. With ISU threating in OSU territory, Daniels smoked running back Deon Silas in the hole, sending the ball flying, OSU’s first forced turnover of the day.

Iowa State got back into OSU territory on its next drive before a tipped pass plopped right into Daniels’ waiting arms. He even made a nice return out of things.

He finished his Saturday with 10 tackles (tied for a team-high), 1.5 tackles for loss, the interception and the forced fumble. This season he’s forced safeties, he’s intercepted passes, he’s forced fumbles, he’s made big hits — he is a lot of fun.

Jabbar Muhammad and Korie Black combined Saturday for an interception and three textbook pass breakups. All of the PBUs came on balls intended for Hutchinson, and two of those were in the fourth quarter. Not to be totally outdone, Hutchinson did catch 10 of his 15 targets for 106 yards.

Muhammad’s interception came in the second quarter when he outmuscled Dimitri Stanley for a ball on a curl route.

Then in the fourth quarter, Muhammad batted a ball away from Hutchinson on third down, which forced a Cyclone punt with less than three minutes to play.

The Cyclones got the ball back and drove down the field. With 25 seconds left, Hunter Dekkers tried Hutchinson near the front pylon on Black’s side, but Black twisted around at the last moment and tipped the ball away from the 6-foot-3 Hutchinson, saving the day.

5. Gunnar stayed in his world

In his first college start, Gunnar Gundy completed 42% of his passes for 103 yards, a touchdown and a pair of interceptions.

It’d be easy to compare Gunnar’s stat line with Garret Rangel’s from last week, but Iowa State’s defense is much, much better than Kansas’. The Cyclones came into this week leading the league in scoring defense and total defense.

It breaks down to the same issue OSU has faced all season — the Cowboys can’t run the ball.

OSU rushed for 1.6 yards a pop Saturday, forcing almost the entire burden of the offense on Gunnar’s shoulders. Did he play great? No. Did he play horribly? No. It’s a hard evaluation when the run game is just that bad.

“Gunnar’s mistake was his last interception, other than that Gunnar play pretty good,” Mike Gundy said. “Now, statistically, I don’t know. I’m sure he’s gonna look at it and think this was not good. And I joked with him later in the week when we knew he was gonna play. I said, ‘Well, the good news is you get to go out there and play and have some fun. The bad news is you’re playing a team that’s Top 10 in defense in college football. You picked a bad week to stop sniffing glue.'”

6. But Put This Throw in a Museum

There is something beautiful about a perfectly placed go ball that hits a receiver in stride.

If Gunnar would’ve put Velcro on this pass to John Paul Richardson, Richardson would’ve just had to look ahead and run. This was an 83-yard dot.

7. But Let’s Not Act Like That Was Good Offense

OSU was 1-for-14 on third downs and scored only three points off five turnovers — WOOF.

The Cowboys can’t run the ball. If it hasn’t happened yet, it probably isn’t going to happen. But 57 rush yards on 35 carries is like Bixby High playing Yale (the city in Oklahoma, not the Ivy League college).

Iowa State’s defense is good, but when you have to punt on 4th-and-3 from the Cyclones’ 39 when you’re trailing in the fourth quarter because there is no conceivable way of getting three yards, something bad is happening.

8. The Timing in Bringing Jaden Bray Back Is Interesting

Jaden Bray played in his second game of the season Saturday, catching two of his three targets for 21 yards.

Bray, a true sophomore with oodles of potential, can still play in two games this season while maintaining a redshirt. OSU has three (possibly four) games left.

It’s a tough call. If Bray can be enough of a difference maker to send the Cowboys to Arlington (they need some help from others to get there), then forget the redshirt — a Big 12 title is worth it. But if it’s all in vain, you could keep him an extra season by just having him sit out one more game.

Then there’s also a real scenario where Bray is good enough to leave for the NFL early. In that instance, might as well play him as much as you can while you have him.

“That’s his decision,” OSU offensive coordinator Kasey Dunn said. “… As far as the redshirt question, that’s gonna be up to him. I’d love to have him play every single game because he’s a gamebreaker for us and will be for the next couple years. Would I love to have a redshirt year? Absolutely, but do I want to win this thing, too? Absolutely. We’ll see how it shakes itself out.”

9. Iowa State, the Team of Almosts

With about four minutes to play, Dekkers nailed Jaylin Noel with a deep post route that should’ve been a touchdown … and the ball went right through Noel’s hands. It was a similar story to Hutchinson dropping a pass with the Cyclones driving against Texas on Oct. 15.

Had both of those guys caught those balls, Iowa State would probably be 6-4 right now — and that’s not even to mention the other three games the Cyclones have lost by a touchdown or less.

So, if you think your year is going bad Oklahoma State fans, find a Cyclone fan and pat him on the back.

I’m 27 years old. There haven’t been a whole lot of Big 12 title games in my life with little to no conference title stakes at play, so let’s make this thing weird.

The closest I can compare this to would be 2014. In 2014, OSU needed a win to become bowl eligible, and OU went into the game 8-3. Punt it again, Bob; There goes the Cheetah — that game. Now it’s OU needing the win for bowl eligibility after the Sooners lost to the backup quarterback of a 3-6 West Virginia team Saturday.

Based on the past three weeks, pretty football is probably not on the menu next Saturday in Norman. I’m hoping for a 2018-esque game — when Taylor Cornelius was a 2-point conversion away from beating Heisman Trophy-winning Kyler Murray. OSU went for it that day, chunking bombs to Tylan Wallace and Tyron Johnson.

What’s there to lose for either team? For OU, it’s bowl eligibility, sure. But OSU? This might just be the difference in going to the Alamo Bowl vs. going to the Cheez-It Bowl. Might as well have some fun.