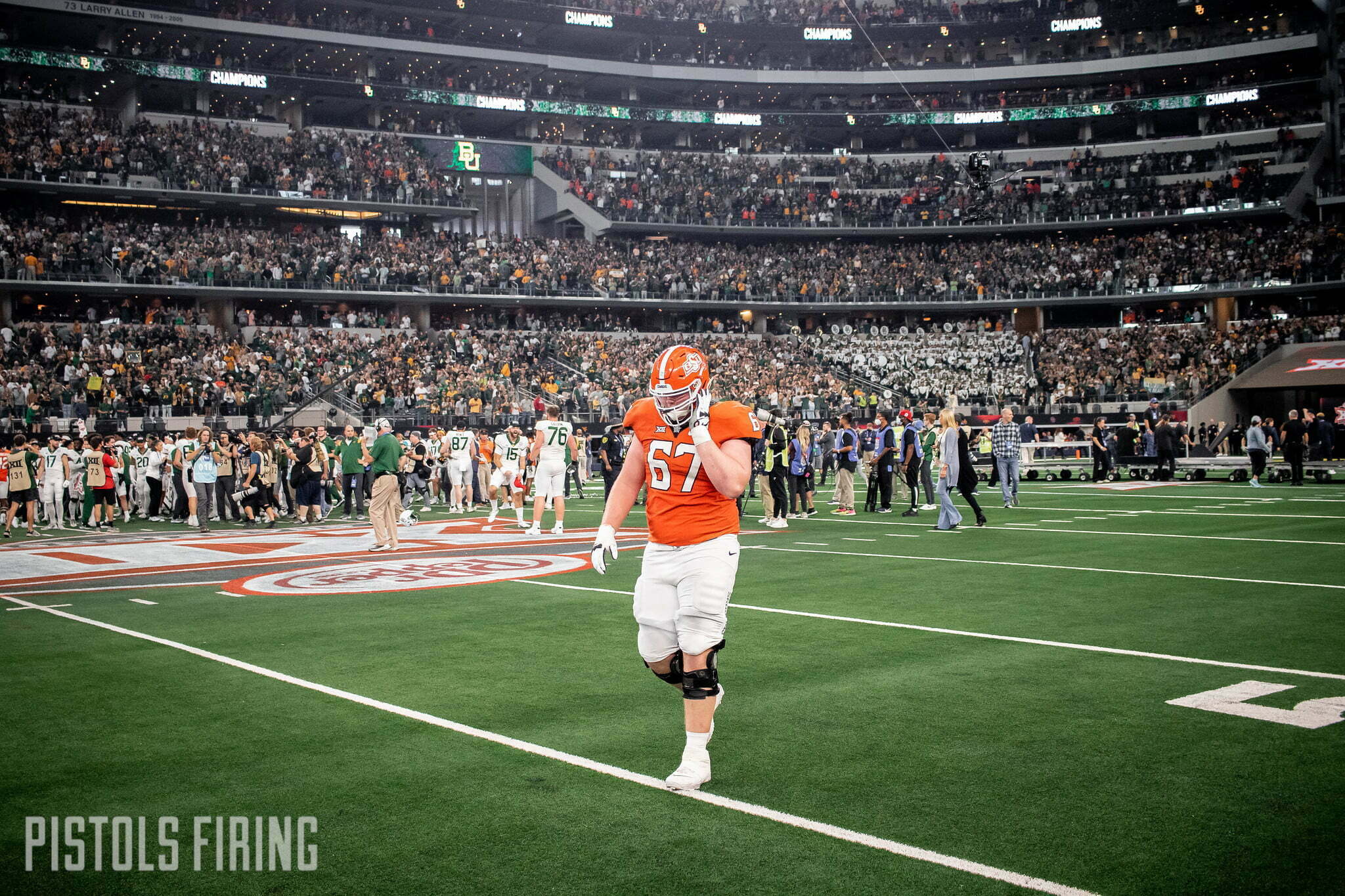 ARLINGTON, Texas — I was in the press box for the Oklahoma State/Central Michigan debacle, but given the stakes, I’m not sure I’ve seen a crazier finish than what I saw in Jerry World on Saturday.

Oklahoma State fell to Baylor 21-16 in the Big 12 Championship, ending the Cowboys’ College Football Playoff hopes by inches after Dezmon Jackson came up just short on a fourth-and-goal run. Here are 10 thoughts from the Cowboys’ heartbreak.

Looking down at an empty AT&T Stadium at 8 this morning, it felt like the scene in Friday Night Lights where the Permian Panthers walked into the Astrodome and looked around in awe of the magnitude of the pomp and circumstance that was about to take place.

Unfortunately for the Cowboys, the game ended in a similar fashion. Destiny was a foot away.

Everything went wrong for the Cowboys all day. Spencer Sanders threw four picks. The running backs couldn’t go anywhere. The Bears were taking advantage of OSU’s mistakes. But, when Dezmon Jackson bounced it to the outside, there was a moment where everything seemed possible again — the Big 12 title, the College Football Playoff, everything — but then that moment went as fast as it came and it was all over.

In the late 1800s word had spread that Mark Twain was deathly ill. He was contacted by a newspaper and gave a quote that has famously been misquoted since. The misquote reads: “The reports of my death are greatly exaggerated.”

The reports that Squinky died in Stillwater at last week’s Bedlam game have been greatly exaggerated.

Everything was just going too well for Oklahoma State. The Cowboys were within touching distance of the College Football Playoff. A Big 12 title seemed a formality. The Sooner demons had been slain. Then a sleuth of Bears ransacked all that was.

Spencer Sanders has thrown 12 interceptions this year, and seven have gone to the Bears.

Aside from his two INTs in Bedlam last weekend, it seemed as if he had put those gaudy turnover games behind him. During the stretch of the Iowa State to Texas Tech games, Sanders had thrown nine touchdowns to a single interception. But after a rough day in Arlington, his 12 interceptions become the most he has thrown in a season to this point in his career.

The first was ugly, an overthrow across the middle. It looked as if he was trying to throw the second to the Baylor sideline, but with a defender wrapped around him, he didn’t get enough juice on it. He was again hit on his third. Scrambling before his fourth, Sanders’ passed to Brennan Presley, who bobbled the ball before getting clobbered and popping the ball to a Baylor defender.

It was a rough day at the office.

4. But OSU Had to Keep Throwing

As painful as it was (especially in the first half), the Cowboys had to keep throwing the football because they couldn’t get anything going on the ground.

OSU running backs Dezmon Jackson and Dominic Richardson combined for 33 yards on 26 carries (1.3 yards a carry). After Sanders’ second INT, OSU went with three straight Jackson run plays on its next drive. That resulted in a prompt three-and-out.

No matter how bad a day Sanders was having, the Cowboys had to throw the ball because there was no hope in running it.

It would be easy to say that OSU’s most glaring omission from this game was breakout tailback Jaylen Warren, but the Cowboys’ mostly costly injury was probably center Danny Godlevske.

OSU could not handle Baylor nose guard Siaki Ika, who weighs in at 350 pounds. Joe Michalski, OSU’s backup center, weighs 300 pounds. Imagine a 200-pound running back taking on a 150-pound defensive back — genetics just aren’t on the smaller man’s side.

Ika finished Saturday’s game with 0.5 sacks and 2.5 tackles for loss. He wreaked havoc all game.

Spencer Sanders threw a trio of interceptions in his first game against the Bears this year, but the difference in this game and that game is the Bears actually took advantage of them.

7. The Battle of the Broyles Finalists

It would be easy to say Grimes got the better of Knowles in the first half, but in all of the Bears’ three scoring drives Baylor started in OSU territory.

In the second half, Grimes’ offense mustered only 36 yards of total offense — seven rushing yards and 29 passing yards.

As it has done all season, OSU’s defense did enough to win a Big 12 Championship.

A list of Cowboy pass-rushers that have hit double-digit sacks in a season under Mike Gundy:

Oh, and Oliver is only a true freshman. Ogbah was a redshirt sophomore in 2014 and a redshirt junior in 2015.

The sack that put Oliver over the double-digit threshold came on the infamous intentional grounding call that OSU faithful will say was a backward pass recovered by the Cowboys. But no matter how it came, 10+ sacks in a true freshman season is nothing to sneeze at.

9. Korie Black, One for the Future

Sophomore corner Korie Black was a playmaker for the Pokes despite the loss.

Black blocked a field-goal attempt and recovered Baylor’s muffed punt. He had a good amount of hype surrounding himself in fall camp given that he is a young, stout 6-foot corner. Christian Holmes left Saturday’s game with injury, so if he is unable to return for the Pokes’ bowl, maybe Black will get even more opportunities to make plays.

The Cowboys can no longer win the Big 12. They can’t get in the College Football Playoff, much less win it, but they still have their legacy to play for.

OSU’s 2011 team is heralded in part for its Big 12 title, but it’s also heralded because it beat OU, which this 2021 team has done. And it’s heralded for its performance in the Fiesta Bowl, something the Cowboys might now get a shot at.

It feels likely the Cowboys will make a New Year’s Six Bowl, and given the Pokes had a shot at the Playoff entering championship Saturday, they’ll probably be favored in whatever highly acclaimed bowl game they get in.

It’s a consolation prize, sure, but looking back at this 2021 team in 10 years, it’ll be a lot more celebrated if it has a bowl trophy in Heritage Hall.