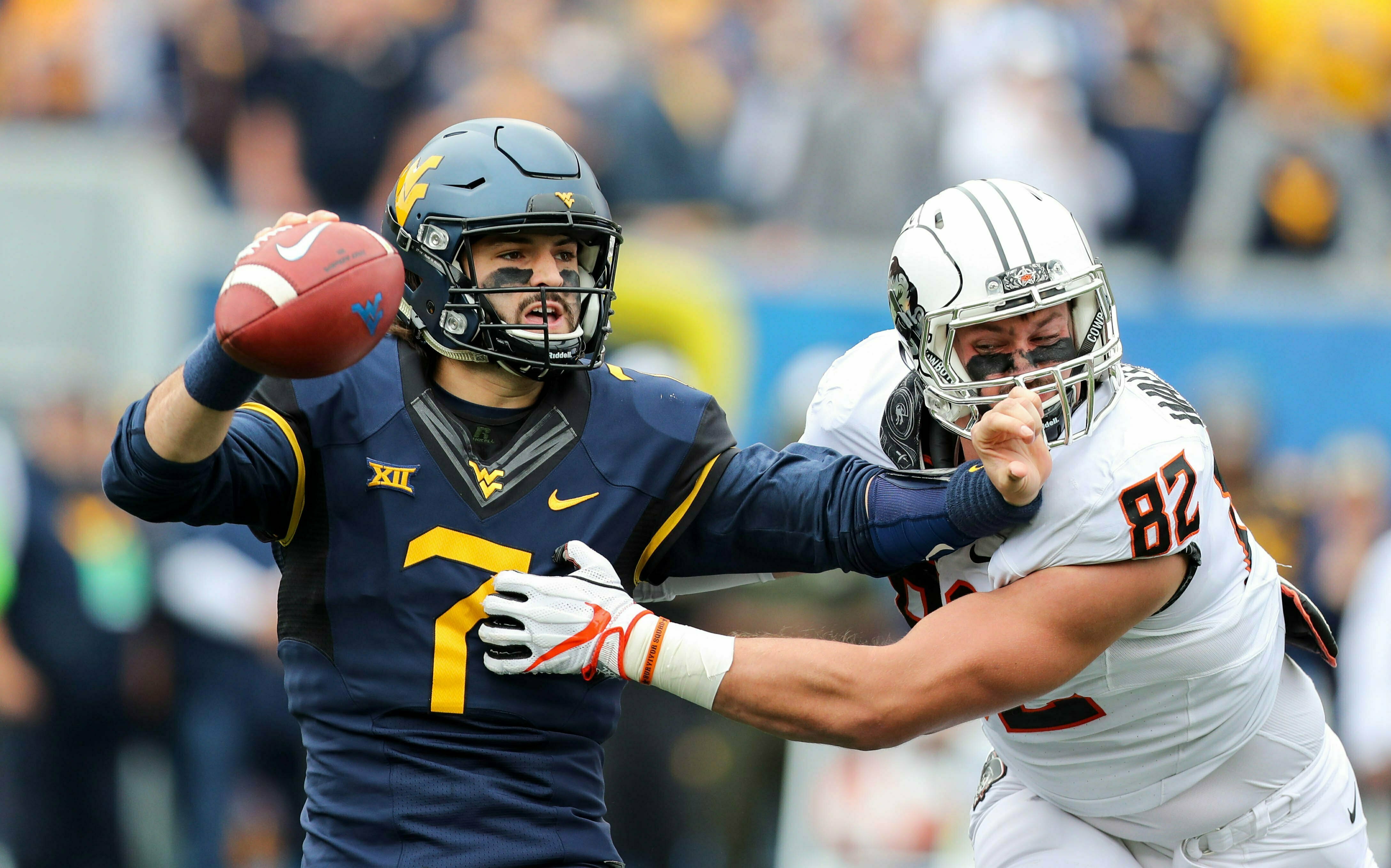 Oklahoma State somehow squeaked by for the second straight week on the road, this time unseating yet another one-loss Big 12 team from the current race for second place in the conference behind TCU.

The Cowboys used another elite defensive performance that included five (!) turnovers from West Virginia (and four INT from QB Will Grier) to take down the Mountaineers in Morgantown. After Justice Hill got hurt early in the game, the Pokes went with J.D. King for most of the game, and the freshman delivered.

Despite some special teams woes throughout (we’ll get to those) and a so-so performance from Mason Rudolph (also that), the Cowboys shut it down with a couple of big boy drives as it scored TDs on three of its final four possessions. It was capped with a Justice-Washington-Justice finish. Hashtag ‘Merica.

Thoughts, let’s get to them.

I realize Texas only scored 10 points and the game went to overtime, but Glenn Spencer’s squad was more stout on Saturday in Morgantown against a loaded-up WVU offense. The Fightin’ Holgorsens came into the game No. 8 in the country in points scored per drive at 3.2, just behind Notre Dame and Georgia. The Pokes held them to 25 on 16 drives (1.6) and created five turnovers, including four picks.

It’s one thing to be able to sniff out and stop Texas’ three-play playbook, it’s another to roll into Danatown and shut down a QB leading the country in passing TDs. Against their opponents’ last 35 third downs, the Cowboy defense has given up just five first downs. That’s Big 12 title-winning stuff if you can do it the rest of the season.

At the risk of sullying my degree from Oklahoma State, I’m going to note that #math was never my strong suit, but to me, for the last two weeks anyway, I think 39 < 10, and Glenn Spencer deserves as many buckets of fried chicken as his arteries can handle.

I’m pretty sure OSU just posted the ugliest 50-point offensive performance in the history of college football. Yes, they scored half a hundy, but it took them 19 (!) drives (and a whole barrel of angry tweets to get there).

They opened with fumbles on consecutive drives, put up three scoring drives and then went on a bizarre eight-play punt-TD-punt-half run that made the GOP look like a collection of Bernie Sanders-loving millennials.

The third quarter was what my wife would affectionately call a “shooties show” replete with another fumble and an appalling pick-six. Then they ended the thing like it was 2011 all over again. Everything just seems so … difficult offensively. To that point, OSU put up just 5.1 yards per play on that side of the ball. That’s all right, but it’s certainly not to the level we’ve come to expect from Oklahoma State teams against lackluster defenses.

Bottom line? I came into this game not knowing what to expect from the offense, and I left with even more questions than answers from a holistic perspective. That’s not exactly what you want heading into Bedlam week against a team that has psychologically dominated you for many, many decades, but it’s where we’re at.

(I can’t believe I’m saying this but) Maybe the defense is good enough this year to give the offense enough room to figure itself out over the course of the next 3-4 weeks.

Side note: How many fan bases would sell significant body parts for six of their eight offensive performances to be in the 40s or 50s?

3. Little stuff used to be a Gundy staple, not anymore

Mike Gundy so surprised and relieved his team scored that he forgot to go for two up 12 in the 4th quarter?

Oklahoma State used to be defined by its attention to the meticulous details because it couldn’t afford not to be. That’s what you do when you have the talent level Oklahoma State has traditionally had. You out-discipline and out-maneuver more talented teams. Somewhere along the way, though, they’ve lost that. By whatever metric you want to use, OSU ranks in the bottom 10 nationally in special teams.

We see it, Gundy knows it, and it might end up costing them their chance at a second Big 12 title (or more). You can’t fix it in a week — these appear to be bigger institutional issues. But maybe you can stick somebody’s finger in the dam long enough to hold it for the rest of the year.

Pardon the hyperbole here, and ignore me if this goes badly, but Justice-J.D. has a little Mixon-Perine feel to it, doesn’t it? You know minus the whole punching a woman in a restaurant thing. Those two went for 48 carries and 228 yards with 3 TDs for good measure, and Gundy put his season in their hands.

King is a dang revelation, and him getting three carries in the first two Big 12 games as OSU rode Justice into the dirt might go down for me as the second-biggest mystery in OSU history behind the Cate-Weeden fiasco in 2009.

I realize West Virginia’s run defense gave up nearly 400 to Kansas, but I also know what I’ve watched for the last two years with Justice. If King is going to be anything close to what we saw on Saturday, Oklahoma State suddenly has one of the better 1-2 punches in the country in its backfield (with an All-American QB to boot).

This guy is the BACKUP! Where are we at in society? pic.twitter.com/II07rKmTvl

The only problem now? With that rushing performance and the way the defense shut down a top-tier offense in WVU, Gundy is going to start coaching like he has an amalgamation of the last 10 Alabama teams. Mason, I’m telling you, I want to run it 73 times minimum. Then we can talk about maybe setting up a screen pass. 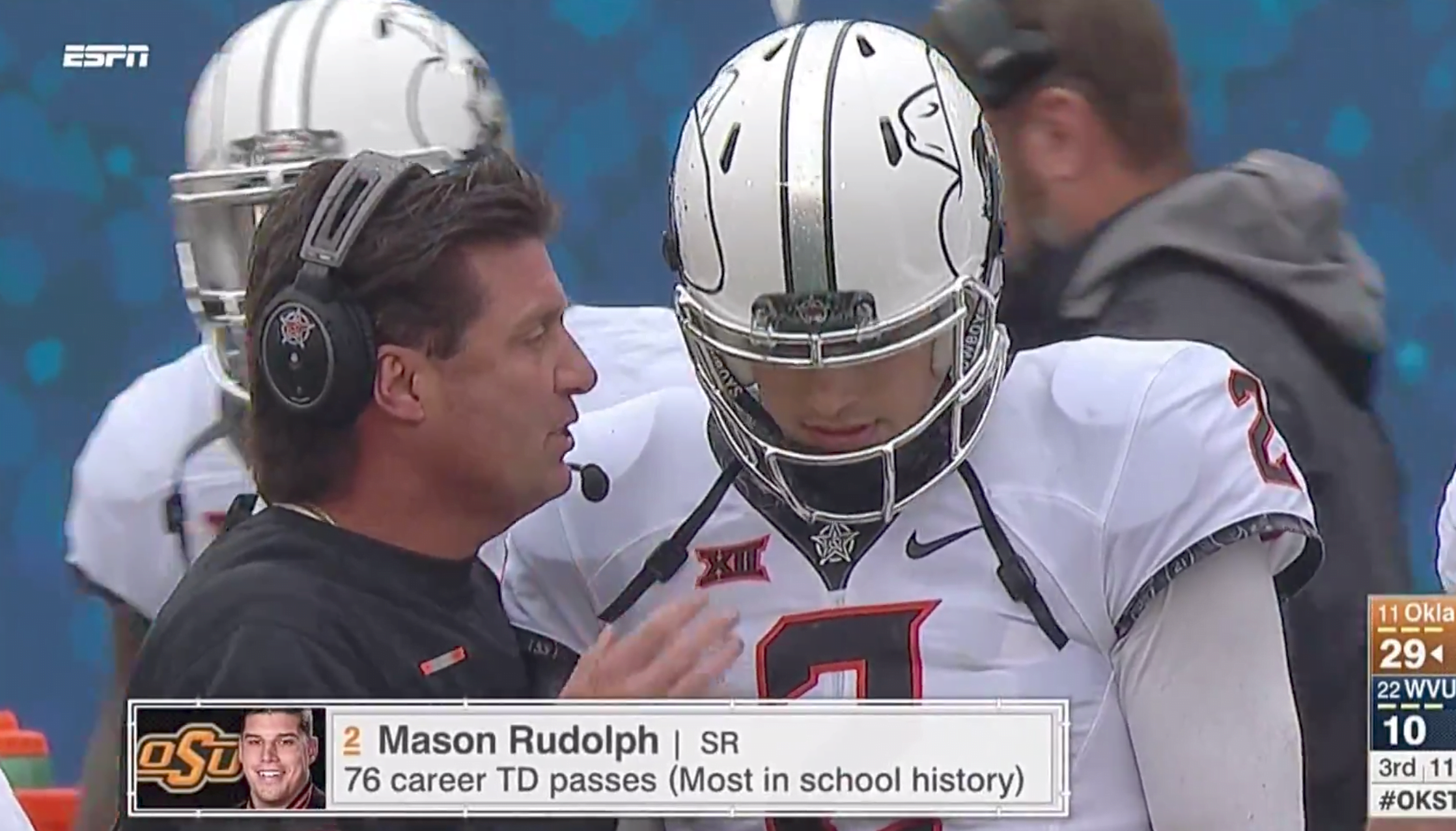 I started hearing about it in the middle of the week, and it became a very poorly-kept secret by Saturday. But Mason Rudolph didn’t practice all week. I don’t know what the injury is, and nobody noted it on Saturday, but I would imagine it contributed to his performance.

The numbers were there (sort of) — he finished 20/34 for 216 yards and 3 TDs (and one ghastly pick-six), but he was all over the place with some of his throws. Wobblers on the fade, sailed balls over the middle and several passes that could have been picked off.

Rudolph and the rain have never mixed that well on the road — that’s true of most QBs. But I thought two things were telling. First, Gundy went to him through the air just after the pick-six. Three straight passes, and though OSU had to punt, I thought that was an important gesture. You’re our dude, finish this off.

Second, ESPN’s Holly Rowe pointed out during the broadcast that she was impressed with the way Rudolph was rallying everybody on the bench. You can tell this season means a lot to him, and in so many ways he’s the heart of this Oklahoma State organization. His ability to buoy a sometimes-sputtering offense in a variety of ways is important, even if the rest of us can’t see it.

I ride pretty hard for Rudolph because I think he’s been sort of underrated by Oklahoma State fans. He’s 29-7 as a starting QB in his career, holds all the records and just keeps winning. Is he Brandon Weeden? Nah, but he’s been pretty damn clutch throughout pretty much all of the last three years.

Oklahoma State came into this game 6-13 under Gundy when turning the ball over four or more times. In the span of six minutes in the third quarter, OSU tried a quick pitch to a freshman RB in the rain (?!) that was fumbled, had a dropped third down pass that hit Dillon Stoner in the hands, got a punt blocked for a TD and tossed a pick-six.

THE SPAN OF SIX MINUTES!

West Virginia’s offense ran 19 plays for 37 yards in the third quarter according to the official box score. They turned the ball over twice. They picked up two first downs. AND THEY SCORED 14 POINTS!

That third quarter is where seasons go to die, and the fact that OSU survived it once again is a testament to something. I’m still not sure what.

7. This was the TCU game

I realized this in the third quarter, but this was what the TCU game felt like on the other side. It seemed like West Virginia kept coming and coming then taking its mascot’s musket and blowing the side of its foot off. And still you didn’t feel great until two men with hair snaking down their necks were pressing flesh at the middle of the field in the middle of a cold, rainy day in mooneshine country.

It felt better to be on the opposite side of this type of game, but it still didn’t feel great altogether to have watched a 9-turnover game in which it took 35 drives for two teams to get to 75 points (hashtag Big Ten).

8. Rodarius and A.J. Green are dudes

Dudes! Oklahoma State has given up just six passing TDs through eight games this season. In the Big 12. I wrote about this earlier this week, and despite Williams getting beat late, I thought those two were fantastic throughout the day against the most productive QB-WR duo in the country.

Grier and David Sills came into the game with 15 TD connections, and OSU held Sills to just three catches for 44 yards and 0 TDs on eight targets. Big time.

A.J. Green is a dude. pic.twitter.com/qDTktiBctU

9. James Washington, all the targets

After Rudolph’s pick-six, the ESPN cameras cut to the sideline and showed an animated James Washington woofing about something. The message was clear: Get 28 the rock. Rudolph targeted him six times the rest of the game and 13 times overall. And 28 delivered with seven catches, 91 yards and two TDs.

It will go unnoticed because King was crowned and the defense was awesome, but with the chips down in this game, it wasn’t Ateman or McCleskey that Rudolph called upon. It was Washington. And he made ’em count.

Ugly? Yes. Uninspiring at times? Absolutely. Confidence-instilling heading into Bedlam? Absolutely not. But road wins are road wins are road wins, and now OSU just has one more game away from its facilities in Stillwater this regular season. It has plenty of problems to solve, but it has somehow survived what I wasn’t sure it would and heads into November with just one tally in the loss column.

And now we all got what we wanted which is Bedlam for the passenger’s seat to the Big 12 title game. There’s still a ton of the season left to be played and a lot of movement to be sorted out, but it seems reasonable to think that whichever team wins Bedlam will be in Dallas the first week of December. I can’t wait. BPS will be hyped out of its mind one week from now as Baker goes for Big 12 title No. 3 and Rudolph tries to touch off win No. 2 against the Sooners.

With the conference on the table next week, OSU should have one goal going into that game.