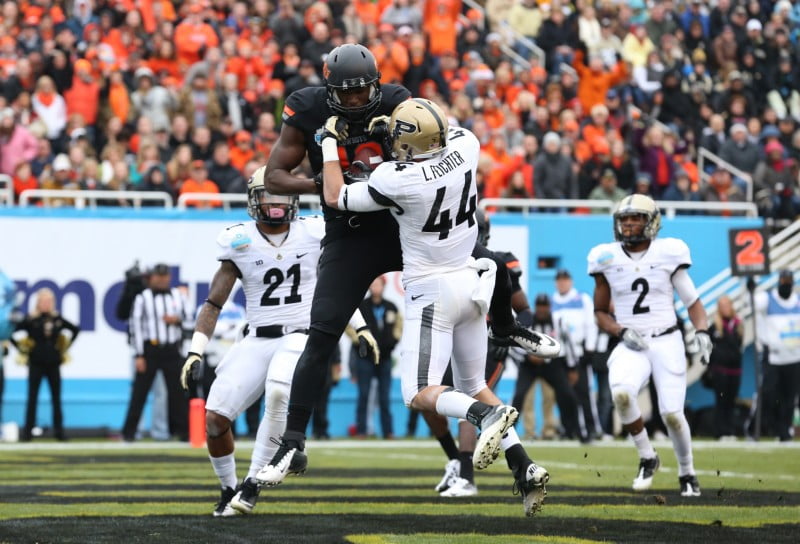 Oklahoma State routed Purdue today in the Heart of Dallas Bowl to cap off one of the strangest college football seasons in recent memory. I have thoughts — despite Purdue’s best efforts to dull my mind with its offense…

1. Bill Connelly said this well, and it’s yet another reason I think Gundy is a top 10 coach.

Good on Mike Gundy for motivating his disappointed team a hair better than Lane Kiffin.

2. Gundy is going to name a starter before the Spring Game and it’s going to be Clint Chelf. And it should be. The biggest question between now and next August is whether or not Lunt is going to transfer, redshirt, or be third string.

3. These couldn’t top the commercial of Boone repeatedly inviting me to a game that was already being played…

4. Oklahoma State is now the all-time leader in bowl win percentage (15-8). They passed USC after that — whatever that was — against Georgia Tech. If Ole Miss beats Pitt then OSU and the Rebs will be tied. Pretty crazy stat, right?

5. How did Purdue play Notre Dame within three and take Ohio State to overtime? This would be like Iowa State doing the same to Alabama and Kansas State. Can you fathom that?

6. Gundy is always good for lots of unintentional comedy and today was no different. Among the many things he did that made me laugh:

Going hat instead of bare head or visor — can’t let the headset mess up that ‘do.

Staring at his play card like Dez staring at an algorithm. I tweeted this during the game but I don’t really blame Gundy for running it up because I’m not totally sure he knew what plays he was calling[1. It was fun, however, to think about all the smiley emoticons Holgorsen and Monken were texting each other when we were running double pitch passes up 35 in the 4th quarter…].

Rocking the KD “towels over the neck tucked into the shirt” look late in the 4th.

7. This team almost pulled off a full reverse regression to the mean in turnover differential today alone. The mean isn’t 0, but that’s where OSU ended up for the season. I wouldn’t have minded a more even distribution throughout the year (like, say, the Arizona and K-State games…)

8. We made a lot of fun of it but the Heart of Dallas people couldn’t have put on a better show. From their social media wizardry to their excitement about bloggers (me!) to their warm embrace of all the fans, I can’t imagine an organization doing a better job with such a crappy bowl than they did. Good work.

9. It was almost like Gundy was taunting the Purdue fan base with his quarterbacks at the end of the game. “Oh, your sixth-year starter doesn’t have an ACL? My second-string guy was Big 12 freshman of the year and my third string guy has the best arm in our conference.” Speaking of Lunt, how about him having the 5th (!) best QB rating in this game for OSU? Fifth!

10. OSU’s crazy, wacky year has finally come to a close. They might have had the best 7-5 team in the history of the Big 12 and yet things end unceremoniously (with lots of fireworks, but still unceremoniously) at 11 AM on New Year’s Day. People will ready way too much into this thrashing as we head into the Mississippi State game next year and not enough into one-possession losses to OU, Baylor, and Texas.

But make no mistake, Gundy has this program around to stay[2. As long as Texas doesn’t call!] and anything less than 9-3 and a Cotton Bowl appearance in 2013 will be a disappointment.

Much more to come tomorrow, appreciate you guys putting up with me all season.