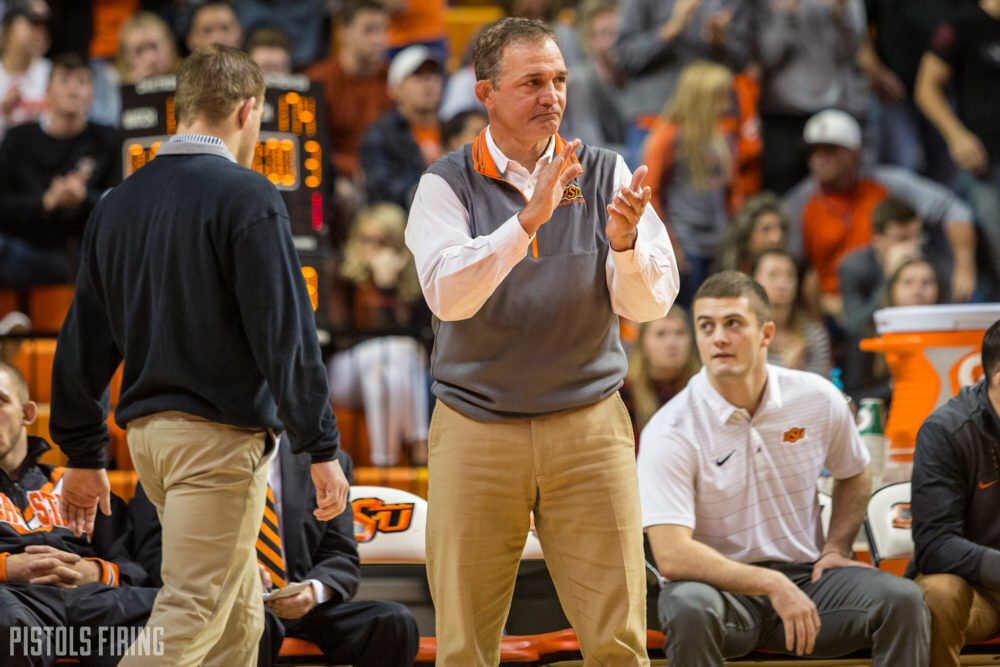 In the spirit of the New Year, I thought I’d put together five thoughts on this young Cowboy wrestling season.

Barring catastrophic injuries at the lower weights Daton Fix will remain a redshirt for the rest of the year. Fix is talented and could be an all time great at OSU but the lower weights are stacked as it is and pulling his redshirt lessens his chance of being a four-timer.

On the surface it looks like Fix and Nick Piccininni are probably fairly close in the room so pulling the redshirt doesn’t change the team race at all. With that it’s the best move to keep him as a redshirt and get the most out of his four years at OSU.

Diakomihalis has a better chance of unseating Dean Heil as the NCAA champ than Bryce Meredith. I still think Heil will win the NCAA title this year even though he dropped a match to Bryce Meredith. I don’t think Meredith is the guy that is most likely to knock off Heil though. Diakomihalis is a freshman from Cornell and he’s been impressive.

As I was typing this, Diakomihalis was upset by a kid from Mizzou which should open the door for Heil to remain as the No. 1 seed at the NCAAs if he beats Meredith at the Big 12 tournament. I think the guy he’ll be wrestling in the finals is Diakomihalis though a number of guys could come from that class to make the final. Very deep weight.

3. Fans should be Forward Thinking with this team

OSU is redshirting some guys and only graduates one senior this year. Even with losing Heil next year they will be stronger from 125-149 than they are this year. I’m not sure how the lineup will shake out there but it will be very good, plus they get Joe Smith back at 157.

Obviously we always want to win it all but look at guys moving up in the rankings throughout the year and developing into next year. That is crucial. You want to see 2-3 underclassmen as NCAA finalist types, and you want to see pretty much everyone be an All-American or at least on the fringe at the end of the year. This is what should put Oklahoma State in the driver’s seat for next year. A deep group of All-Americans and three to four finalists should put the Cowboys in position to win a title next year.

4. Piccinnini, Brock, and Weigel have the potential to be NCAA finalists

Early in the season I wrote that I hoped, and sort of felt, Kaid Brock and Nick Piccininni had changed levels with their wrestling, Kaid’s had some matches that have been frustrating to watch from a fan standpoint. But f it weren’t for two big mental mistakes he’d be undefeated. Piccininni has looked really good except for one period when he was on bottom against Lizak from Minnesota. I still think both of them could finish really high at the NCAA tournament and potentially make the final.

Even though Pich has one less blemish on his record he’ll have a tougher path to the final than Brock as long as Brock isn’t on the same side of the bracket as gross. 125’s pretty stacked. He’s only wrestled two matches but I’d also add Preston Weigel to this list. He still doesn’t seem to have a ton of offense but I think he could make some legit noise at the NCAA tournament. I wouldn’t be shocked at all to see him in the NCAA finals.

5. This roster is stacked

Will everyone bump and Brock fill 41? Will they all stay at their current weights and just wrestle it out to start with Gfeller filling 41? Will Lewallen come back down to 141? Will Smith stay up at 65? Any way it shakes out, somebody — probably more than one person — that is an All-American caliber wrestler, will be left out of the lineup.