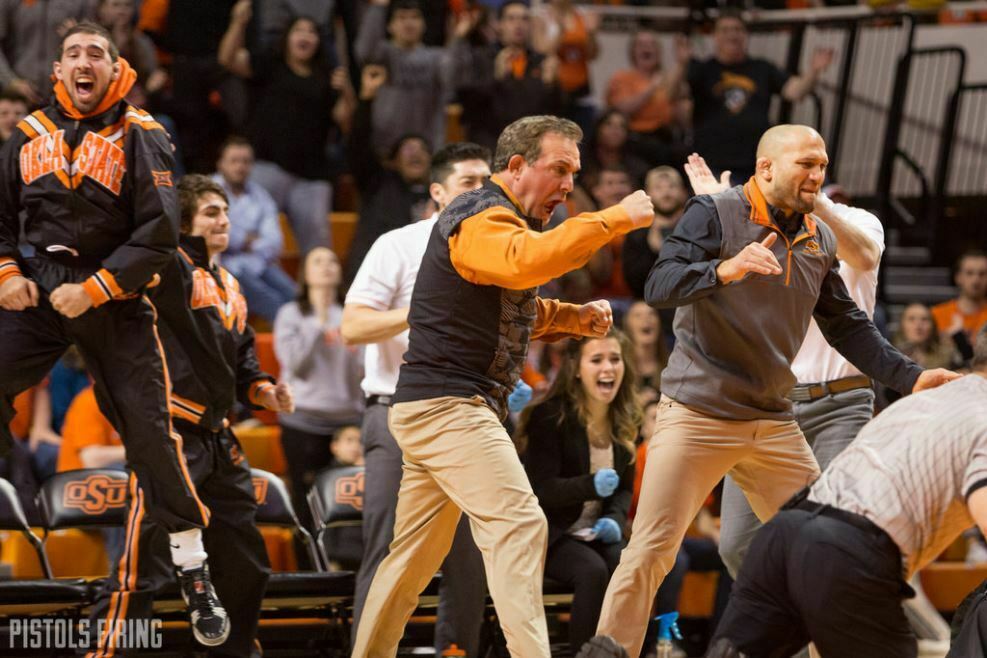 John Smith was subdued after the Cowboys’ 31-3 victory Sunday against Iowa State. Oklahoma State (9-2) rebounded from their loss to Missouri, but it seemed as though this result was expected. Therefore, Smith has nothing to celebrate. That’s how you operate when you expect nothing but the best. Here are five takeaways from the dual.

Dean Heil’s 55-match winning streak and two national championships feel like distant memories. His 3-1 loss to unranked Ian Parker on Sunday was another chapter in the puzzling book that is Heil’s senior year.

During the past couple of seasons, it seemed that Heil was going to win whenever he walked out of the tunnel. It wasn’t always pretty, but you felt confident every time he took the mat.

Fast-forward 11 duals into the 2018 season, and we’re looking at a completely different wrestler. Each of his first three defeats were against top-5 opponents, and Heil is always going to get his opponents’ best because of his immense success, but Sunday’s loss is unprecedented and bewildering.

“Just a matter of focusing on outcomes,” Smith said. “He’s focused on the outcome of matches right now. Not really looking at his performance. Until that changes, he might get a lot of the same.”

2. Rogers does it again

Chandler Rogers is OSU’s kingpin, meaning he seems to pick up more falls than anyone else in an orange and black singlet. Rogers proved his pin Saturday wasn’t a fluke, because he came right back Sunday and did the same thing, earning his eighth of the year.

“Just trying to have fun and get back to the way things were,” Rogers said. “I kinda got in a funk for a while, so I was trying to go out and be aggressive, do the things I know how to best.”

Unlike Saturday’s match, however, Rogers didn’t have to come back before finishing his opponent, which happened 67 seconds into the bout. The fans in GIA cheered loudly and rose to their feet, which was a much-needed energy boost. It felt pretty dead in there leading up to that match.

It seemed as if Boo Lewallen heard what Smith said following his loss to Grant Leeth. Smith said Lewallen didn’t make any adjustments Saturday, but he had to Sunday when his match against No. 18 Jarret Degen entered sudden victory. Lewallen trailed 6-5 entering the third period, but he scored a pair of takedowns in the third, which sent the match into sudden victory. Lewallen and Degen jostled for position for a while, but Lewallen prevailed, scoring the winning takedown and claiming an 11-9 victory.

Hestin Lamons finally got to see some action when it counted. Rogers said Lamons is an awesome drill partner, always willing to help a teammate get some reps in before a match.

Preston Weigel threw Lamons around Saturday morning and did it again right before weigh-ins. Then, shortly after making weight Saturday, Lamons was devouring some food before heavyweight Derek White asked for his help once more.

“He literally just slammed (Lamons) all over the mat for an hour,” Rogers said. “We were like, ‘Oh my goodness.’”

The drilling apparently worked, as Lamons defeated Hank Swalla 4-2 at 174 pounds Sunday. Lamons was filling in for Jacobe Smith, who appeared to suffer a minor leg injury Saturday.

5. Weigel bounces back with a victory

Preston Weigel is back in the win column. The redshirt junior was undefeated through his first six matches before falling to No. 7 Willie Miklus on Saturday. We saw Weigel return to form Sunday, as he won 4-1. The match marked the sixth time this season he has held an opponent to two points or fewer.

“I think Preston did fine,” Smith said. “I don’t think he had a great weekend. Had a little bit of an injury that nobody really knew about. He did fine today, came back and picked up a solid win.”