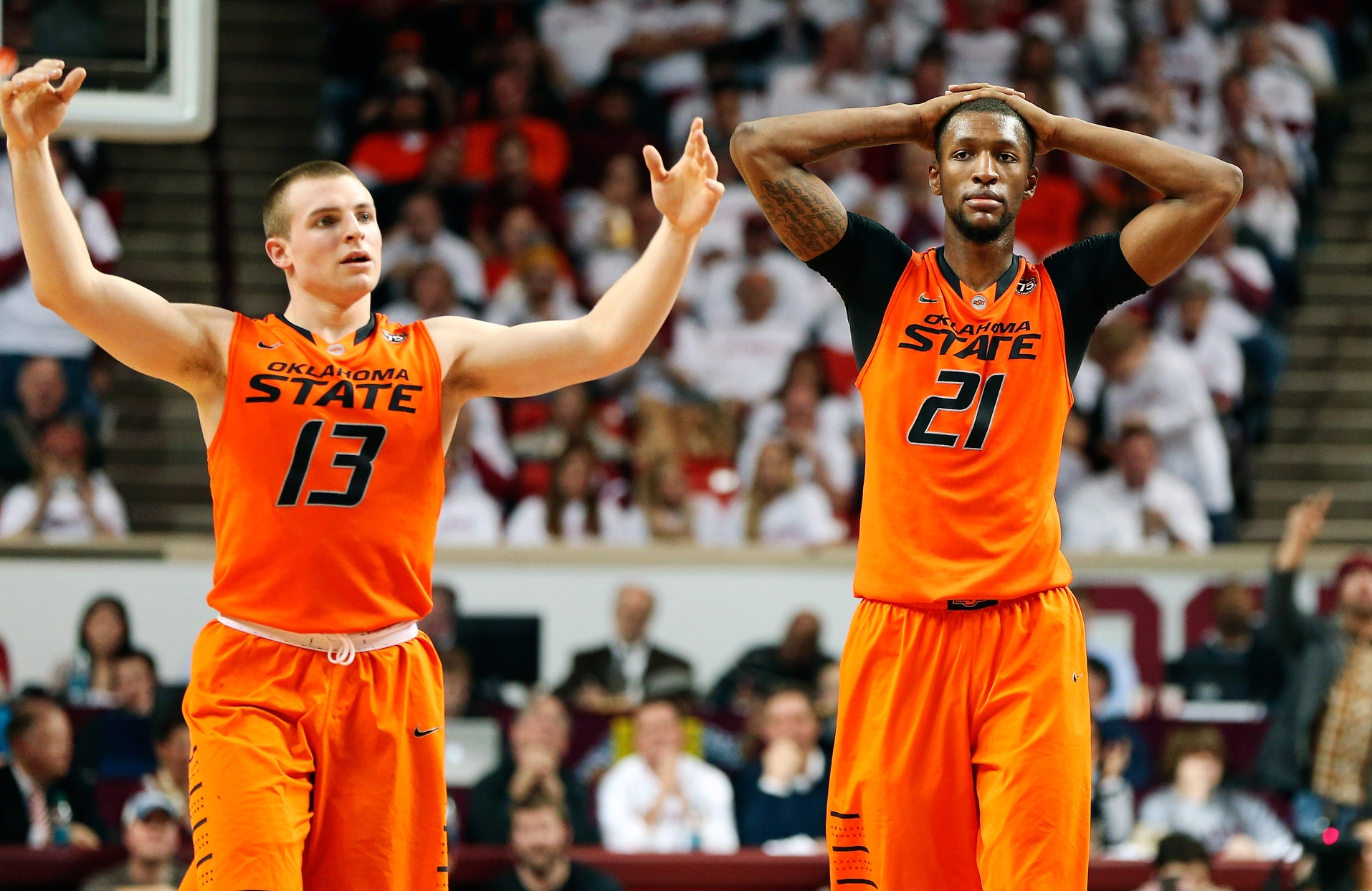 An airing of grievances, a misery-loves-company email exchange, whatever you want to call it, I rounded up Amilian and OKC Dave to discuss last night’s Bedlam loss.

Amilian: I hate losing to OU as much as any half-sane OSU fan, but we lost to a good Big 12 team, and rival, on the road. It’s not an excuse. It just shouldn’t surprise anyone. I’m not a huge advocate of Ford but look at our four losses. The presence of Cobbins against any of those team drastically changes the game.

OKC Dave: I agree that the Cobbins loss was particularly harmful to this team. It exposed the weakest part of our team as well as our lack of depth. While I want to resist the reflex to just blame Ford, here’s what I saw last night:

• No plan. Did we overcome the lack of a presence inside by running a bunch of screens or motion to get good looks? No. We relied on Forte to shoot out of his mind to keep us in the game. Now that Cobbins is gone, our success (apparently for the rest of the season) seems to rely on our guards having great shooting nights. If that doesn’t happen, we’ll hang around with good teams but probably lose.

• The 4th foul by Nash (reaching in on Spangler) was a good metaphor for the foul trouble we get into. Are some of the calls we get bad calls? Yes, of course. But that one was just a stupid foul. Spangler beats him for yet another rebound, and Nash gets frustrated and does something a 10-year-old on my son’s YMCA team would do…reaches in and picks up a dumb foul. This is coaching, plain and simple. Nash is a junior and should get a lot of credit for developing as a basketball player in his time at OSU, but the mental aspects of his game are still lacking.

• Markel throws down an #SCTop10 dunk, flexes to the crowd, and OU beats us down the floor for the 10th time. This used to be unheard of at OSU, now it’s common. This was a good example of what Nate mentioned in the comments section yesterday. What is this team really about? OU put on a team basketball display. We seem to be a group of individuals who make some really good plays. I think we all know where this is going in March.

• Lon Kruger is a great coach.

Kyle: I thought the second foul by Smart was even worse than Nash’s fourth. You fall for a pump fake by Tyler Neal when you know the one thing you cannot do is get into foul trouble in the first half against OU. I’m actually not even sure it was a pump fake, Smart was just trying to swat it into the tunnel and he pissed the first half away as a result.

I’m hesitant to pin everything on Ford too, and Amilian is probably right about Cobbins, but I’m getting pretty tired of us acting like Cobbins is Wilt Chamberlain. Would he help? Absolutely, but nobody cares about that at this point. As Markel said after the game, he’s not coming back. And Ford has to figure it out without him.

The thing that really frustrates me — and this was what was so painful about Bedlam football this year — is that I think OSU is the more talented team (maybe by a wide margin) and there’s just no semblance of a blueprint for winning games on the road. Smart just freaks out when we get down by 10 or more and like Dave said, we have to shoot ourselves back in it.

That’s fun on Twitter when Forte’s hot but to think it’s the way to compete for Big 12 titles is foolish.

This team will finish 12-6 in the league, get a 4-seed, and get thrashed in the second round by a good 5-seed. I mean if I’m John Helsley I’m already writing the copy on the tournament game like a mad lib, you can just fill in team names and players in two months.

OKC Dave: 12-6 is a good season…it’s roughly equivalent to the 10-win seasons that Eddie had three years in a row between the Elite 8 year in 2000 and the Final 4 year in 2004. The problem is, the talent on this team is far superior to the talent of those 10-win teams (apologies to Victor Williams & Melvin Sanders). Yet we are achieving less than what our talent should give us.

Amilian: We all love ourselves an athletic team, but that attribute is proving to be overrated. Smart, Markel, Nash and Williams could take on any other NCAA team’s 4-man squad in pick up street ball.

It’s scary that we might have already seen Ford’s ceiling as a coach. Do any of you expect to see him improve the program over the next few years?

This is probably the best team he’ll ever have (I think, maybe I could be persuaded otherwise) and if the best he can do is a third or fourth place finish with it, I mean, what’s the point?

I think the bigger (better?) question is: what does Ford have to do to get fired in the next two years? We’re (obviously) overreacting to one game but I also think we have the bigger picture in mind, that 12-34 on the road in conference play is unacceptable from OSU’s $20 million man.

Next year’s starting lineup should scare you (and not in a good way) because I think Nash is leaving: Stevie-Forte-Williams-Murphy-Cobbins. But at least everyone will be playing the right position!

OKC Dave: I think you can give Ford credit in two major areas: recruiting and player development. Recruiting is pretty obvious, but I think people overlook player development under Ford. He got way more out of Eaton and Harris than we had seen in the past.

Anderson was pretty solid from day one, but he became more polished as his career progressed. Markel and Le’Bryan have become much better players under Ford than they were when they arrived in Stillwater.

I think he could improve the program if he continues to land big recruits, particularly inside. But I think relying on bringing guys in alone is fool’s gold. Under Eddie, we weren’t REALLY good unless we had good coaching + good talent. We always had good coaching, but the talent came in waves.

With Ford, the formula for success is the same…but when will we have good coaching to complement the talent? I haven’t seen it and I don’t think we will see it.

If you’re Holder, do you roll the dice again and try to hire a good bench coach and then hope he can bring in the talent? I think Holder will be ready to make a bold move after next season…unless we just completely collapse this year.

Amilian: I’m not convinced Stevie will start over Newberry, but all that means is Forte won’t be completely reduced to the Keiton role because he’ll have two point guards on the team.

Great point on player development. You can also see it in Cobbins. However, looking at the big picture, all you see are individuals getting better. I don’t expect Ford to get fired until after the 2015-16 season. Next year, he’ll have the “I lost 3 players who are now playing professionally” excuse in his back pocket.

If Holder does fire him, how many years would Holder give the next coach on his contract (assuming his last name isn’t Self)?

Kyle: Hah, I didn’t mean for this to devolved into a “Fire Ford!” post but I fully expect Doug Gottlieb to get a five-year, $9 million contract starting in 2017.

OKC Dave: My last comment: I am so thankful for GIA. That was my first trip to Lloyd Noble. I haven’t been to many games at true away sites: KU, TU, ORU, and now OU. It got kind of loud, but it was nothing special – which made us losing our composure even more frustrating. GIA is a special place.