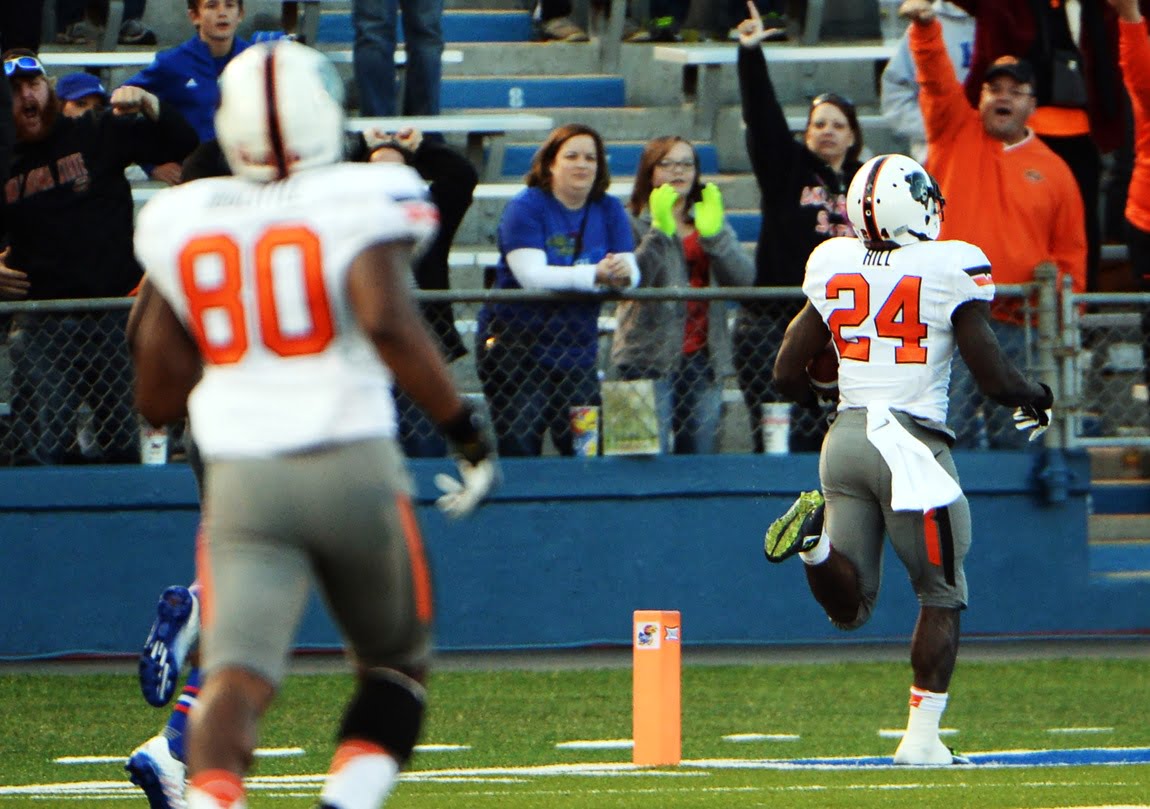 Tyreek Hill scores on a kick return in Lawrence (USATSI)

Tyreek Hill has been as good as advertised and because of this I’m going to keep a rolling list of the insane things folks say about him as the year goes on (click on link for quote attribution).

“They have maybe the fastest football player in the world playing for them as a running back, so somehow we have to hem him up.” –Larry Coker

“Tyreek comes in, what is he? Initially before you make a call, he’s a problem, because you don’t even know what he is.” –Van Malone

“I was skeptical going in. There are fast guys everywhere. We had fast guys when I was there. But he isn’t just a fast guy. He’s got moves. He can catch. He’s a lot bigger than I thought … he’s kind of ripped up. I was extremely impressed with him the first game. I didn’t know what to expect going in, but he’s the real deal. I think he’s going to be a player that could win a game single-handedly if they give him enough touches. I could not sing his praises enough. He was everything he was billed-up to be.” –Clint Chelf

“When I first started practicing with him, my angles immediately changed. I had to make sure I take the proper the angle so I don’t get embarrassed.” –Ryan Simmons

“Well, when he got in the open field, even when there’s people in front of him, it doesn’t matter.…He’s so much faster than anybody else it’s just hard to corral him and kind of get a feel for the angle to take as a tackler.” –Mike Gundy

“One of the fastest kids I’ve ever seen on the football field.” –Marcell Ateman

“It looks like he never gets tired. That’s that Olympic track conditioning he’s in. His legs keep going and going. I can’t wait to see him in game time.” –Desmond Roland

“Everybody I talk to they ask me about him and I say, ‘You’re just going to have to wait and see.’ It’s something you can’t really describe” –David Glidden

“When the ball snaps he’s got this little button he turns on and makes him run real fast.” –Van Malone

“Tyreek (Hill) came, and I seen that guy run, and I ain’t never seen anything like it. I went, ‘Whoo, he fast.’ He is really fast.” –Ra’Shaad Samples

“We had for the most part attempted to sky kicks and punts away and keep the ball away from him. We felt (KU kicker Trevor) Pardula could have gotten it out of the end zone and get a touch back. … He didn’t hit that one obviously the best, and Tyreek did what he does.” –Clint Bowen

“When he gets his hands on the ball, he can do great things.” –Jimbo Fisher

“He has a speed not many people get the chance to see, so he can definitely run. We’ll see what he does on Saturdays when it matters, but he’s done a great job so far.” –Jemal Singleton

“They’re lucky they didn’t kick it to him three or four times.” –Jordan Sterns