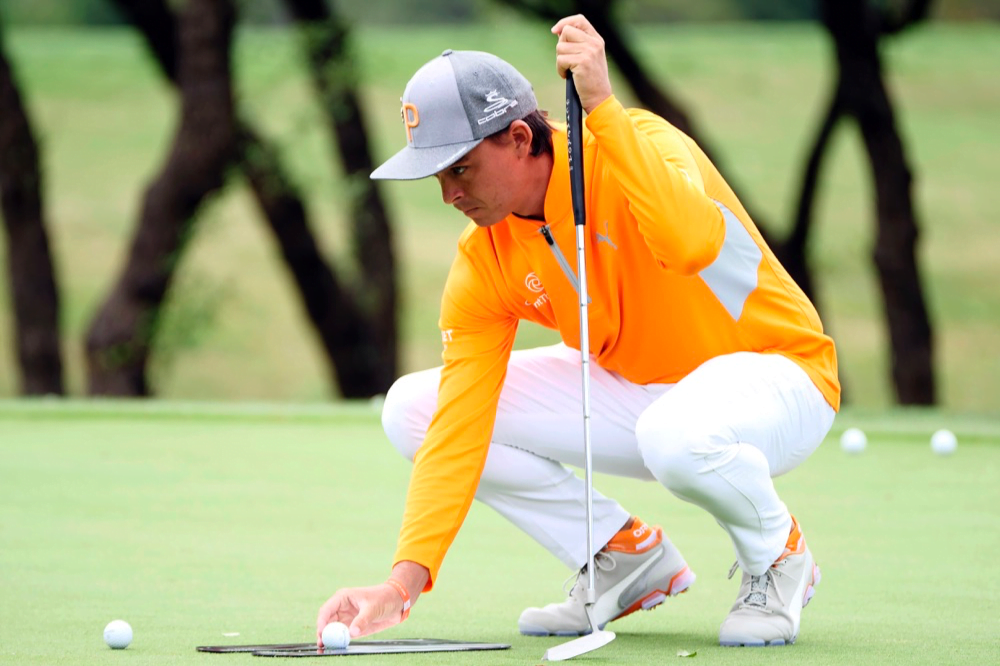 AUGUSTA, Ga. — No Oklahoma State golfer has ever won a green jacket. Rickie Fowler came close last year when he birdied the last to fall one shy of a playoff with eventual winner (and eternal Cowboy killer) Patrick Reed. But this year’s crop of Pokes makes up over 5 percent of the 87-golfer field, and a couple of them have a legit shot at contending. Let’s go from worst to best chances of wearing green and orange on Sunday.

5. Viktor Hovland (2000-1): No amateur has ever won this tournament, and that won’t change in 2019. But Hovland is the best am in the field (by far) and has a legit chance of making it to the weekend. He played a practice round on Monday with Sergio Garcia, who obviously knows a thing or two about success at Augusta National (hopefully he didn’t offer any tips on turf management to the OSU student). My official prediction on Hovland is that he makes the cut but doesn’t finish in the top 35 (which would be an amazing week!)

4. Kevin Tway (300-1): Bob’s son has struggled since winning the Safeway Open last fall. He (obviously) has loads of talent, but he’s in that range of golfers for me on the outside of the top 50 players in the world who might bounce back and forth between being ranked in the 75s and the 200s over the next few years. The margins are thin, and Tway hasn’t been on the proper side of them lately. 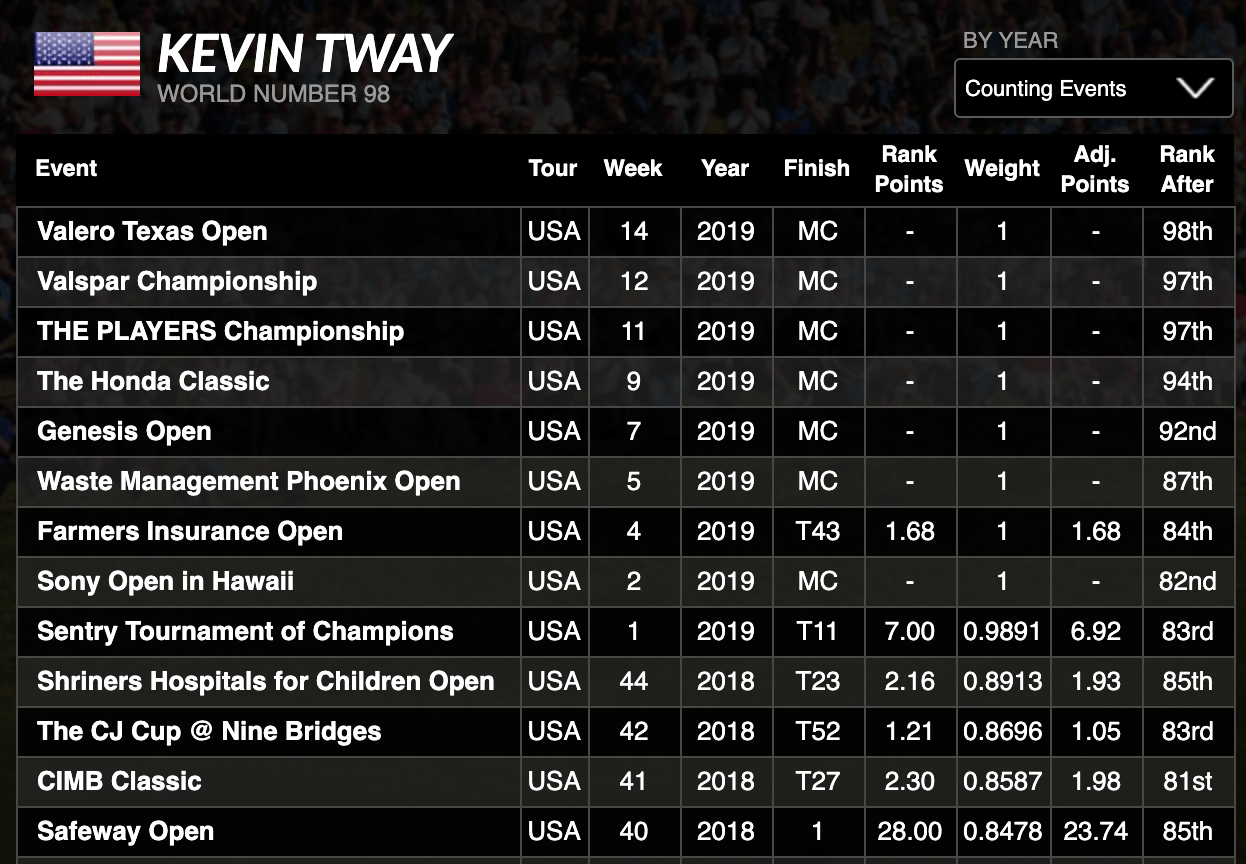 3. Alex Noren (125-1): If Noren wins a major, I don’t see it being this one. He’s missed both cuts at Augusta — his scores are 74, 78, 74, 79 — and doesn’t have a top 40 in a stroke play event so far in 2019. He’s a good player — a really good and underrated player, actually — but it would be a stunner, even for deep in the weeds golf statistics minutia nerds like me, if he contended for the 2019 Masters. I guess the conclusion there is that it’s not a great sign that he’s third most likely of any Cowboy to win this week.

2. Charles Howell III (100-1): I didn’t know the odds coming into my rankings, but it works out that the five I had in my head in order are the same five Vegas had in order. Here’s a list of the top players on the PGA Tour in 2018-19 in strokes gained (the best metric we have for who is playing the best golf). 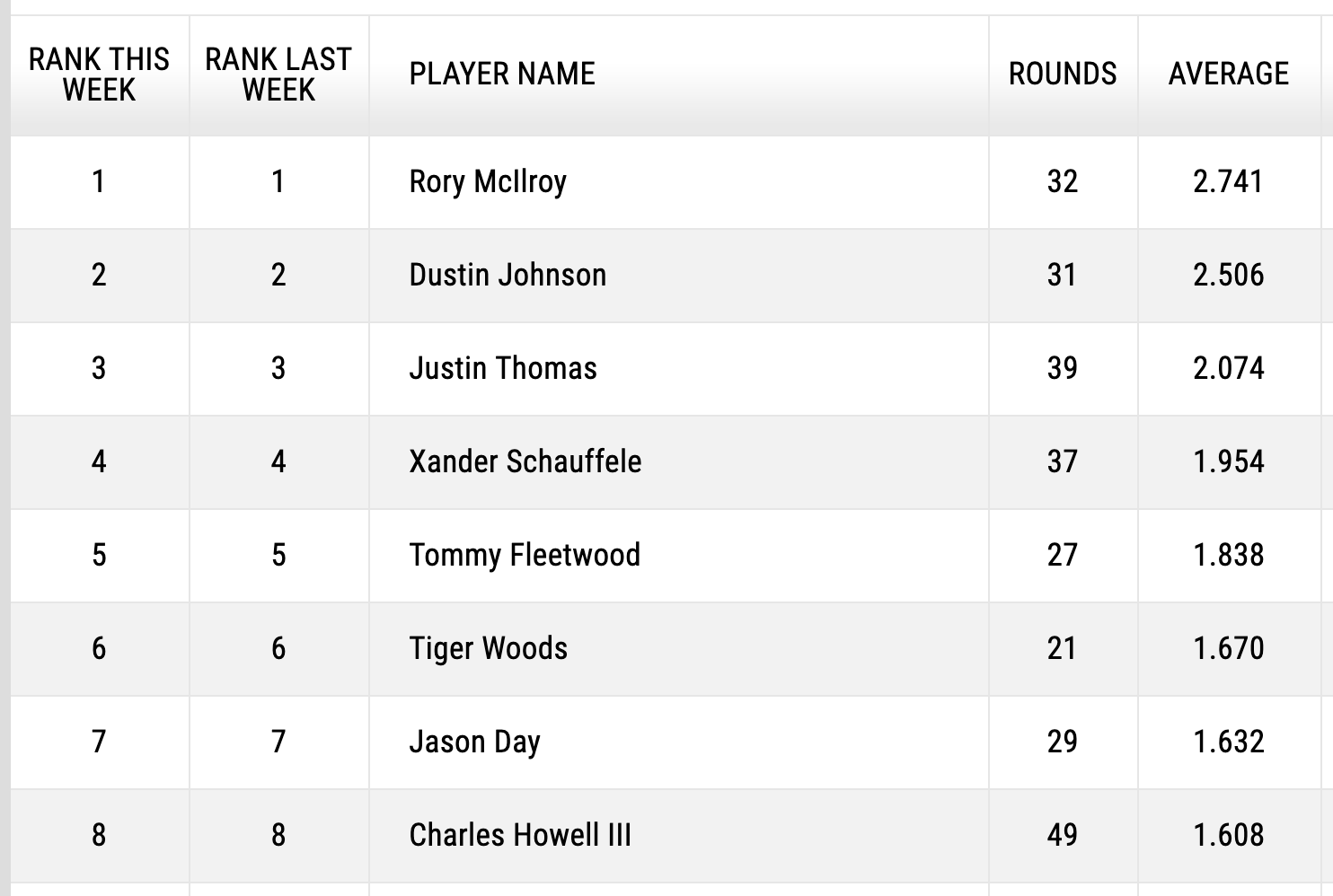 That gives me hope for Howell, who is playing his first Masters since I started covering golf (!). I don’t know if he can roll all weekend with the DJs and JTs of the world at a place like this where distance and approach shots matter more than most (Howell is 49th and 89th respectively).

But I do know that if he’s sniffing it at all come the weekend, I’m going to be a hot mess in the media center trying to contain my delight. And help us all if we get something revolving around a Howell-Rory showdown on Sunday. I might just heave my body into one of the ponds and get the hook so I don’t have to suffer through that.

Rickie Fowler finished runner-up last year, his best career finish to date at The Masters. His 16.1 strokes gained against the field for the week was the most of any player not to win the Tournament since Lee Westwood in 2010 (17.2). Fowler’s strokes gained total would have been good enough to win 41 of the 81 previous Masters, including ten of the prior 12. [15th Club]

The part that concerns me generally is that Fowler did most of his damage on the greens in 2018. He’s a really good putter, but that’s not generally sustainable year over year nor the formula for winning Augusta. He’s going to have to hit it better than he ever has from tee to green if he wants to be the heavyweight among many, many heavyweights this time around.

I do think Fowler has a legitimate chance to win this tournament and that he will thrive throughout the week, but I also think it comes down to how it plays out over the first few days. If he leads big or trails small going into the last 18, I feel great. If he leads small or is tied I feel worse than Mike Gundy watching a 2018 special teams play unfold on a Saturday in September.