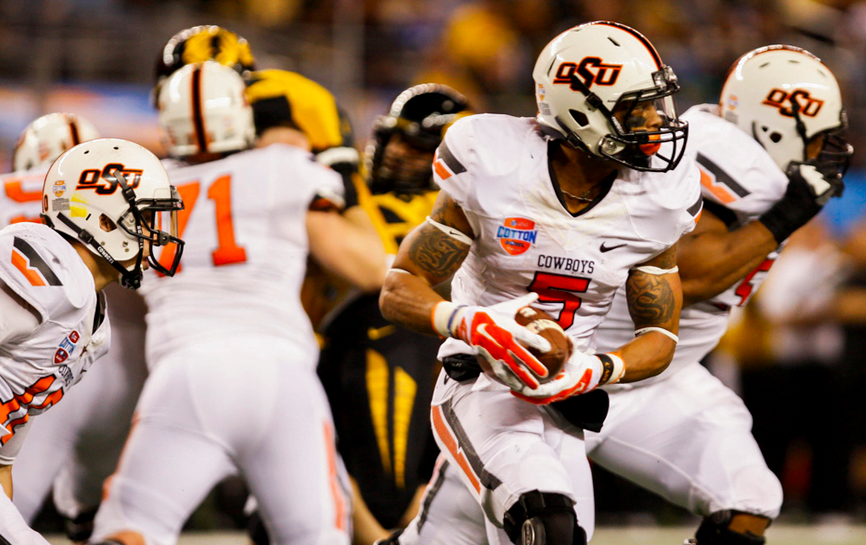 Oklahoma State learned its bowl mate on Sunday, and it turned out to be a familiar foe. The Cowboys will square off against the Tigers of Missouri in the Liberty Bowl on New Year’s Eve.

But that rivalry started all the way back in 1915 when the Tigers, then of the Missouri Valley Intercollegiate Athletic Association welcomed Oklahoma A&M which was then in the Southwest Conference. Missouri dealt the visiting team a 13-6 loss, but made it up by inviting it back in 1921 for 36-0 blowout.

Over the first 55 years of the series, Missouri would own the Cowboys winning 15 of 17. In 1960, Oklahoma State joined the then Big 7, turning into the Big 8. Yes, that numeral in a conference’s name originally coincided with the number of schools it held as members.

Oklahoma State and Missouri shared conference ties until 2012 when the Big 12 became the Big 12* and UM headed off to bask in the glow of the SEC.

“I think it’s pretty neat,” said Mike Gundy about the renewed rivalry in his bowl announcement teleconference. “We had a lot of good times back in the old Big 8 days and even in the Big 12. I’ve made that pretty obvious that I hated to see that league broke up with Nebraska, Missouri and (Texas) A&M departing. So, I think it’s pretty cool that we get to play a team that we’ve been accustomed to playing for a long, long time.”

Don’t Let it Go to Overtime

Here’s an interesting nugget I mined from the media guide. The two teams have reached overtime three times ever, but all three came within a four-meeting stretch starting with back-to-back extra-innning games in 1996 and 1997. The former ended in a 35-28 loss in Columbia. A year later, Bob Simmons’ team was 6-0 and ranked No. 12 in the AP poll when they welcomed the Tigers. This game would go to two overtime periods, but the result would be the same. Tigers win 51-50.

And OT was not just a Simmons issue. Two meetings later in 2001 (Les Miles’ first year at the helm), OSU would fall in three overtimes to the Tigers at home 41-38. Let’s hope for a regulation ending.

There have been other memorable matchups between the two teams like that program-defining win in Columbia in 2008 which began a streak of three-straight Ws over the Tigers to send them off to the SEC.

As mentioned before, the Cowboys most recent meeting with the Tigers ended in a 41-31 loss in the Cotton Bowl. The upcoming Liberty Bowl meeting makes bowl matchup No. 2 between the two teams.

Clint Chelf set an Oklahoma State record that night, taking part in 67 total offensive plays and racked up a career-high 381 yards and two TDs. But he also threw two picks and lost a late fumble that was returned for a score.

The Cowboys took a 31-27 lead with five minutes left when Desmond Roland found pay dirt. But the Tigers would answer quickly with a Henry Joseph 16-yard rushing TD to go up 3. Oklahoma State’s would-be game-winning drive was actually saved by Chelf who took off for 23 yards on third-and-10, in one last exhibition of that get-away-from-the-cops speed. But it was just a few plays later that Michael Sam sacked the senior and stripped the ball which facilitated yet another late-game heart-breaker for that 2013 season.

It’s been a mixed bag of results when the Tigers and Cowboys have faced off. Will the long-time backup QB have a similar result to the last one that finished his career against Mizzou? Let’s hope not. Here’s to a four-overtime thriller in Memphis.