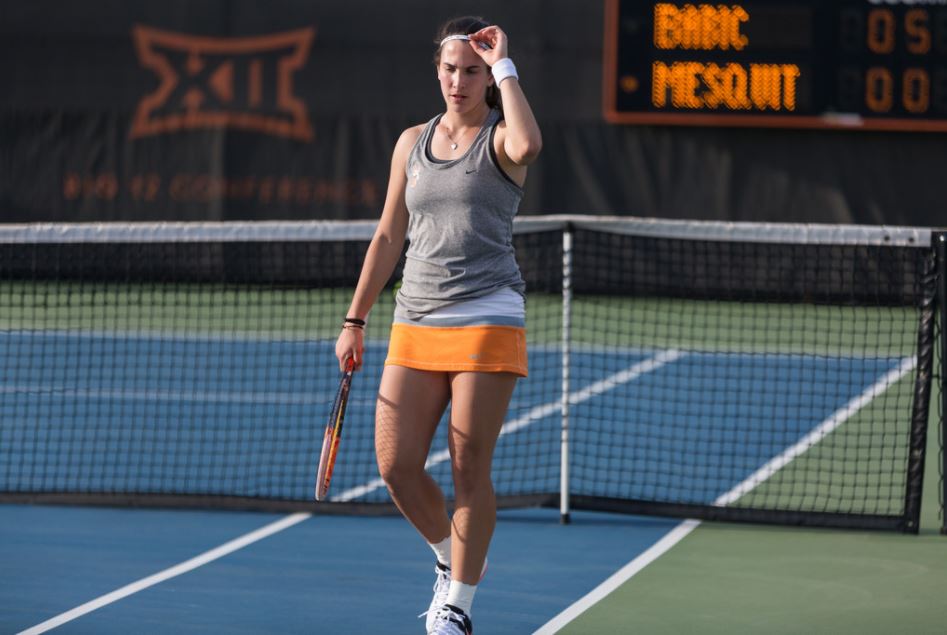 Here’s a cool video put together by the athletic department on the softball team practicing in chilly conditions:

Sub-freezing temps and a sub-20° wind chill?? It's gonna take a lot more than that to stop us. #JUMP #okstate pic.twitter.com/BOepFtjly1

OSU’s doubles team of Sofia Blanco and Vladica Babic advanced to the finals before falling in the title match in the Freeman Memorial Tennis Classic in Las Vegas, Nevada. They earned a 6-2 win over North Carolina’s No. 18 Jessie Aney and Alexa Graham in the semis before being defeated by UCLA’s No. 1 Ena Shibahara and No. 7 Jada Hart, 6-4.

The Cowgirls now head back home for a seven-match homestand, with an opening doubleheader against Abilene Christian and Oral Roberts on Saturday. The team also plays Wyoming on Monday.

The men also found success over this past week, defeating Lamar, 7-0, and Bryant, 7-0, on Sunday at the Michael and Anne Greenwood Tennis Center. This is the ninth-straight opening-day victory for Cowboy head coach Jay Udwadia, who came to OSU in 2013.

Missed out on the action today at the GTC? ??

The 15th-ranked Cowboys’ next game is on Friday at 1 p.m. against the University of Missouri-Kansas City in Stillwater.

The Cowgirls lost their second consecutive road game against Kansas State, 80-64, last Saturday in Manhattan. The Cowgirls were never able to establish a lead against the Wildcats, who led by as many as 22.

They also lost sophomore guard Areanna Combs for the year to injury.

“We are extremely disappointed for Arie, who has worked so hard to earn a starting position and become a key contributor for our program,” head coach Jim Littell said. “She had successful surgery on Friday and we are eager to help her through the recovery process.”

The Cowgirls fall to 12-4 overall and 3-2 in Big 12 play and now prepare for their game against West Virginia on Thursday at 7 p.m.

The Cowgirls’ Braxtin Miller has performed exceptionally well in her freshman season thus far and just recently won the Big 12’s Freshman of the Week. Here’s a great interview with the Ohio native on how she got to where she is today:

Braxtin Miller hit the ground running during her first season at #okstate. How did the talented freshman find her way to Stillwater and what did she think of her first Bedlam experience? pic.twitter.com/eR2rhWjG0m

The Pokes now prepare for their next dual against conference opponent West Virginia on Friday at 7 p.m. in Gallagher Iba Arena.