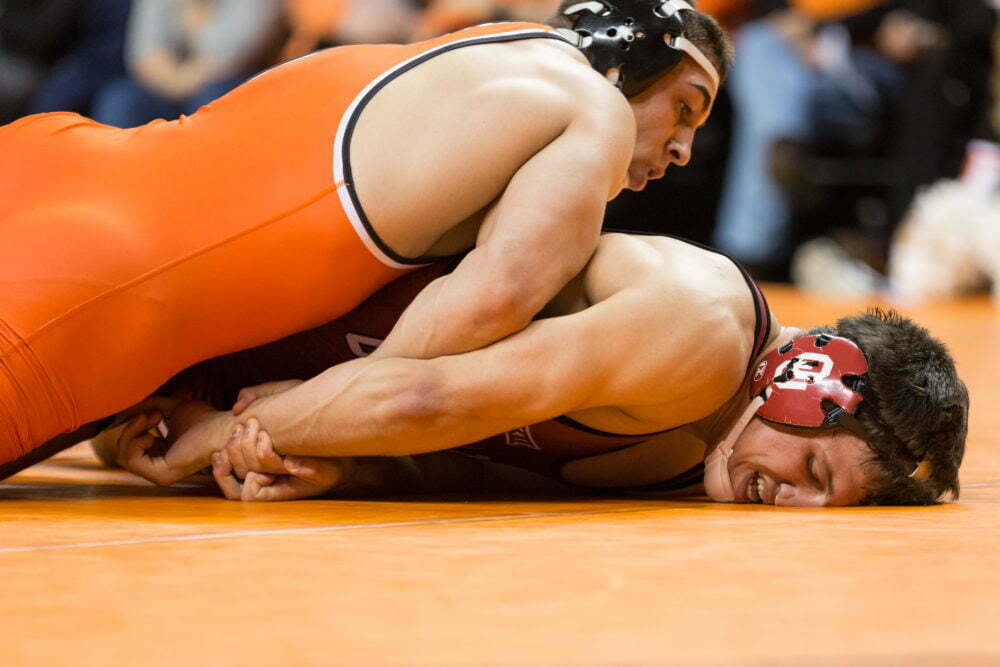 On the whole, the Cowboys could’ve definitely looked better, but it wasn’t all bad.

Preston Weigel wrestled really well and looks like a legitimate NCAA title/finalist contender at this point in the season. His biggest knock has always been his offense on his feet. When he shoots he scores though, and he did it here. If he can continue to develop his offense and confidence there he should be a high seed at the NCAA tournament and could contend for a title.

Kaid Brock and Dean Heil picked up solid wins, as well. Heil’s just not a guy that gets bonus. If you’re an OSU fan and haven’t learned to live with that you need to. He still could/should win a NCAA title, but it’s unlikely he’ll win by large spreads doing it. Kaid Brock is figuring out a way to do it though getting a major here and picking up a tech last time out. Hopefully that continues.

Blaylock and Lewallen both dropped matches they weren’t favored in, but Blaylock hung on to not give up any bonus. Lewallen hasn’t looked especially good in his new starting role. The talent seems to be there, but hopefully he can start closing the gap on top level competition. So far in big matches he just hasn’t looked great. Blaylock in many ways wrestled well in a loss just to not give up any bonus.

We wrote this week that 165 could go a lot of ways. It didn’t go the exact way the Pokes wanted. Rogers just really couldn’t get his offense going here and lost. Similar with 125. Nick Piccininni got behind early and stormed back late, but simply couldn’t put enough points together to pull out the win.

After dropping 165, OSU needed to win out or pick up bonus to take the dual. They simply didn’t. Jacobe Smith and Preston Weigel wrestled really well controlling and winning both their matches, but Keegan Moore dropped a hard fought match 10-6 that would’ve kept the Cowboys in it.

Theoretically, the dual could’ve been won at Heavyweight with a pin, but with White wrestling a high-caliber HWT like Stoll you really just hoped to see a win. White actually wrestled really well but gave up a TD to the bigger Stoll in the 2nd SV overtime. Even with the loss there his bump to HWT has proven to be a positive move for the Cowboys. The TD Stoll had in regulation was a bit controversial to say the least.

Ultimately, you want to see the Cowboys wrestle well at the end of the year and have a high NCAA finish. Hopefully they can work out the kinks and build towards a solid finish there.