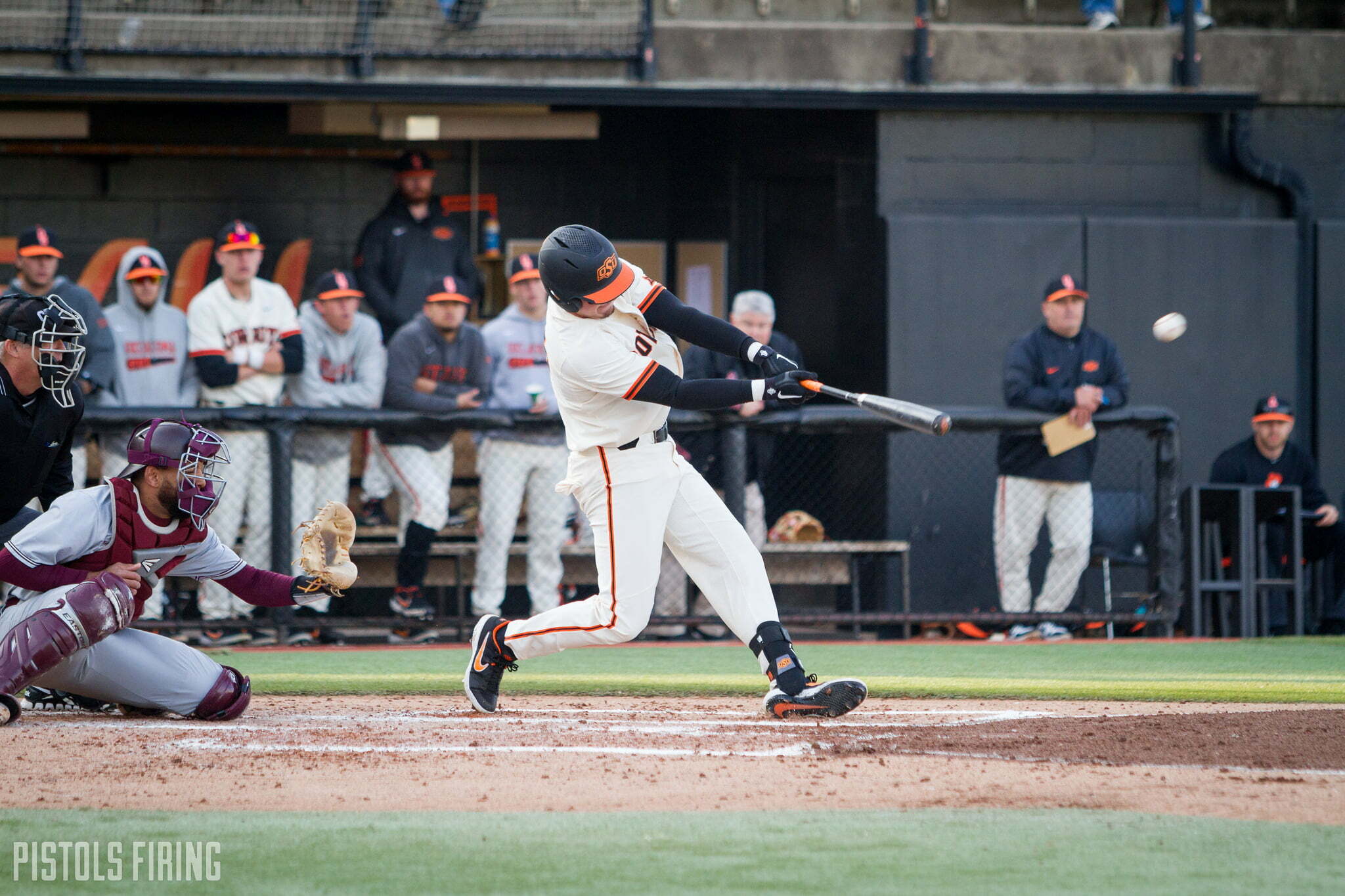 The Cowboys went 2-1 this weekend at the Dodger Stadium College Baseball Classic, beating USC 11-6, losing to No. 2 UCLA 6-3 and winning against No. 16 Michigan 3-2.

In the USC game, the Cowboys were in a 6-0 deficit after two innings. From there, Peyton Battenfield came out of the bullpen and threw seven scoreless innings where he struck out seven.

The Cowboys scored seven runs in the third inning. Bryce Carter and Carson McCusker each had two RBIs in the game.

Against UCLA, OSU jumped out to a 3-1 lead after four innings, highlighted by a Trevor Boone home run. That’s where the Cowboys’ scoring stopped, though, as UCLA scored two runs in the fifth, two runs in the sixth and one in the seventh to win 6-3.

Joe Lienhard picked up his first start of the season against Michigan. Lienhard threw 5 1/3 innings. He threw 100 pitches in that time. Once pitching coach Rob Walton went the his bullpen, nobody threw more than 22 pitches, as four Cowboys combined for the final 4 2/3 innings. The bullpen allowed one run and three hits and struck out eight.

Sunday was a nice day at the plate for Colin Simpson. Simpson was OSU’s designated hitter against Michigan, and he went 3-for-4 with an RBI.

The Cowboys host Missouri State at 3:35 p.m. Tuesday before a three-game series against Southeastern Louisiana this weekend in Allie P.

THIS is how you pimp a bat flip ?

The Cowgirls dominant week moved them up to No. 14 in the USA Softball Top 25.

The Cowgirls host Central Arkansas at 5 p.m. Wednesday, and OSU hits the road to play Samford, Ole Miss twice and Memphis this weekend.

OSU’s men’s and women’s tennis teams combined for a 5-0 weekend.

The Cowboys will play away against Tulsa on Wednesday before hosting Charlotte and UMKC this weekend at the Greenwood Tennis Center.

The 13th-ranked Cowgirls beat No. 39 Gonzaga 5-2 and Wichita State 4-0. The Cowgirls start Big 12 play this weekend, hosting Kansas on Friday and Kansas State on Sunday.

The Cowgirls season came to a sooner-than-expected end this weekend at the Big 12 Tournament.

Seventh-seeded OSU lost to 10th-seeded Kansas 76-66 in the first round of the event in Oklahoma City. The sophomore tandem of Vivian Gray and Braxtin Miller combined for 41 points and nine rebounds, but it wasn’t enough.

After a hot start to the season, the Cowgirls year comes to a likely end at 14-16, losing 12 of their final 14 games. The Cowgirls were fairly young this season, as five of the six players who started at least 10 games were underclassmen.

The Cowgirl golf team finished 16th of 17 at the Darius Rucker Invitational this past weekend at 57-over.

Han-Hsuan Yu was the Cowgirls top finisher, as she finished tied for 46th at 12-over. Chih-Min Chen, Sara Camarena and Michelle Forsland all finished tied in 62nd at 17-over.

The Cowgirls will be in action next on March 21 at the Annenue Spring Break Classic in Waikoloa, Hawaii.