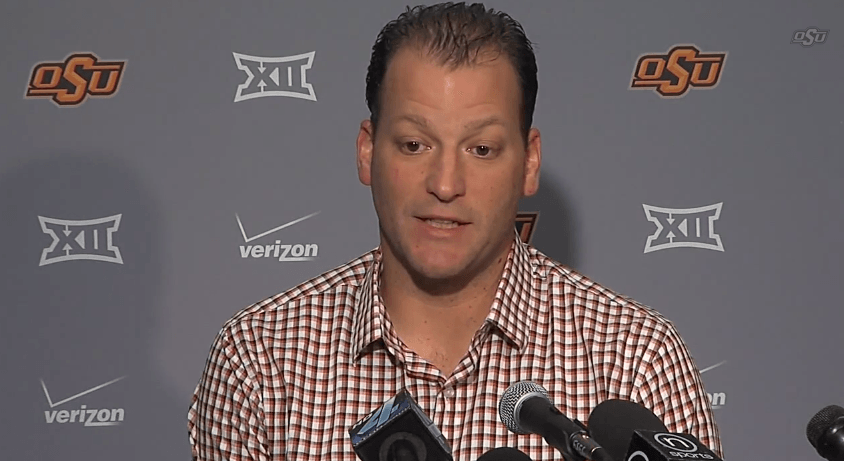 It would have been borderline unthinkable 40 days ago that Mike Yurcich’s contract would be renewed for the 2015 football season (and beyond?) but it looks like that’s exactly what’s about to happen.

Mike Gundy spoke about the 111th-highest paid assistant in the country recently to the Tulsa World.

“He’s done a good job. Mike has taken a lot of heat because we run up such big numbers offensively, and he came in during a time of transition. We’re in a transition at the tailback position and certainly this year with our offensive line.”

Oklahoma State’s national rank in points per drive in the two seasons Yurcich has been the offensive coordinator?

That’s not even close to a good job.

“For the first time in several years, we had to patch things together on the offensive front,” Gundy said.

“The guys that we have are giving us a ton of effort, but (Yurcich) came in when we haven’t played with (an NFL-caliber running back). It makes a huge difference. His schemes have been good.”

Thomas Fleming of Cowboys Ride For Free has written very intelligently about the iterations of OSU’s offense and he recently made the case for Yurcich being re-upped.

He was doing it based on the assumption that Yurcich wasn’t really allowed to call his own plays when he came in (until maybe the last few games?) — something Gundy seemed to confirm when he said “the system is no different….”

The problem with that statement is that Gundy threw Fedora and Dana into the same sentence about a “system” when the reality was that Dana introduced an entirely new system in 2010.

Nevertheless it looks like a three-star QB from South Carolina has saved Mike Yurcich’s job over the final three weeks of the regular season. Six weeks ago I would have been aghast but I admit I can be probably be talked into this.

Take the last seven games of 2013 and put them with the last two of 2014 and you get two things. The first is the common denominator of a good college quarterback and the second is a prolific offense that could, with a decent D, be worthy of a conference crown.