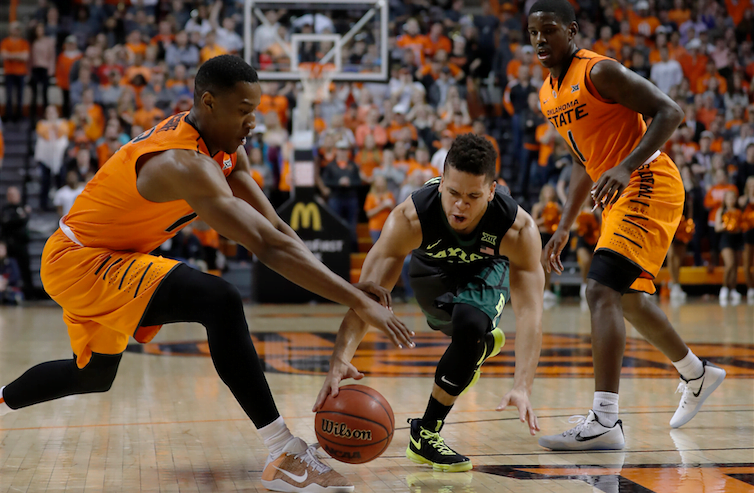 STILLWATER, Okla. — On a night in which the Oklahoma State home crowd was late arriving for a 6 p.m. tip, its team followed suit.

The Cowboys played hard out of the gate. There was a keen sense of urgency much like the team has displayed during its now-snapped winning streak, yet it couldn’t seem to crack the code to the Baylor defense as quickly as it did during its first matchup in Waco. Countless opportunities to capitalize early were squandered, after the team missed shot after shot in the opening frame. Solid, open looks from the floor that weren’t taking friendly rolls.

Despite the adversity, and shooting 36 percent, OSU was down only four points at halftime. To the No. 6 team in the country.

The second half though, was a different story. OSU outscored the Bears 39-38 in the final 20 minutes. Shots were slowly trickling in. They were forcing turnovers. Yet still for the greater part of the second half, it was looking like a wash.

But I’m not going to waste your time with the first 16 minutes of that final half. I’m here to talk about the final four minutes, when OSU flipped a switch down 13.

The Cowboys turned to full-court pressure to keep Scott Drew’s team off balance. And it worked like a charm. Baylor chucked the ball up 4 times in that span, giving the Pokes added possessions that allowed them to crawl back in. Knocking down just one field goal, the Baylor was forced into rushing possessions and playing above its head. Without any timeouts, the 21-3 Bears looked lost.

It wasn’t just the defense [which was admittedly solid], either. For the first time in a long time, Gallagher Iba-Arena was roarin’ like she hadn’t in a long while. And it was making a tangible difference.

“It was loud,” said Baylors Johnathon Motley, who finished with a game-high 24 points. “It was crazy loud. You couldn’t hear anything at the end.”

To the point Baylor was visibly shaken. The Bears turned the ball over 12 times all game, then four in the final four minutes. That final pace would be one that would make West Virginia’s Bob Huggins proud.

In the 300 section, the sound of the crowd engulfed me as fans from behind me sent chills down my spine. The 60 percent (give or take) capacity crowd was 100 percent bought in. Everyone was on their feet. The entire arena, which was quiet for the first 36 minutes, had found new life in the final four.

“The fans just didn’t quit on us,” said senior Phil Forte. “That [four minute] stretch was the loudest it’s been all year. We fed off the crowd’s energy .. Imagine if it was completely sold out, how loud it would have been. The fans that came tonight, thank you. We fed off the energy.”

Here’s a play with just under two minutes left and a perfect example of that. OSU forces a trap and an ill-advised pass that gets picked off by Hammonds thanks to a little ball pressure and urgency.

Tell me a rowdy arena doesn’t make a difference in an outcome, and I’ll point you to exhibit B below. Forte isn’t lying about the energy it gives players. He doesn’t get a cent added to his scholarship for helping sell tickets. But crowd noise matters. Just look at this.

Even head coach Brad Underwood took note of the difference it made in the closing minutes.

“It was extremely impressive how loud Gallagher was during that stretch,” said Underwood.

On its surface a three-point home loss to a top-10 team seems like a missed opportunity. Just a week ago, this team was literally fighting for its bubble life. Yet a five-game winning streak including a win over a quality SEC opponent cooled that discussion. Regardless, another top-10 win in consecutive games to cap a six-game winning streak would have done wonders for the resume.

And you could think on the “what ifs?” of that all you want.

But despite the loss and despite the missed opportunity to solidify what is looking more and more like a team primed to play itself well into March, all I can fall back to is that nostalgic feeling of what Gallagher Iba, if only for four minutes, gave us in that moment. She was breathing flames down Scott Drew’s back. A near insurmountable deficit was nearly toppled.

When I left the arena expecting to feel disappointment, all I could find was hope. Less than a year into the Underwood area, that same fire breathing that nearly blew over the Baylor team in the second half has given new life to a program left by the wayside.

There’s a long road ahead in restoring a once-prestigious basketball program to its glory days, but for the first time in awhile I think the pride has been restored. Prestige will come with time.