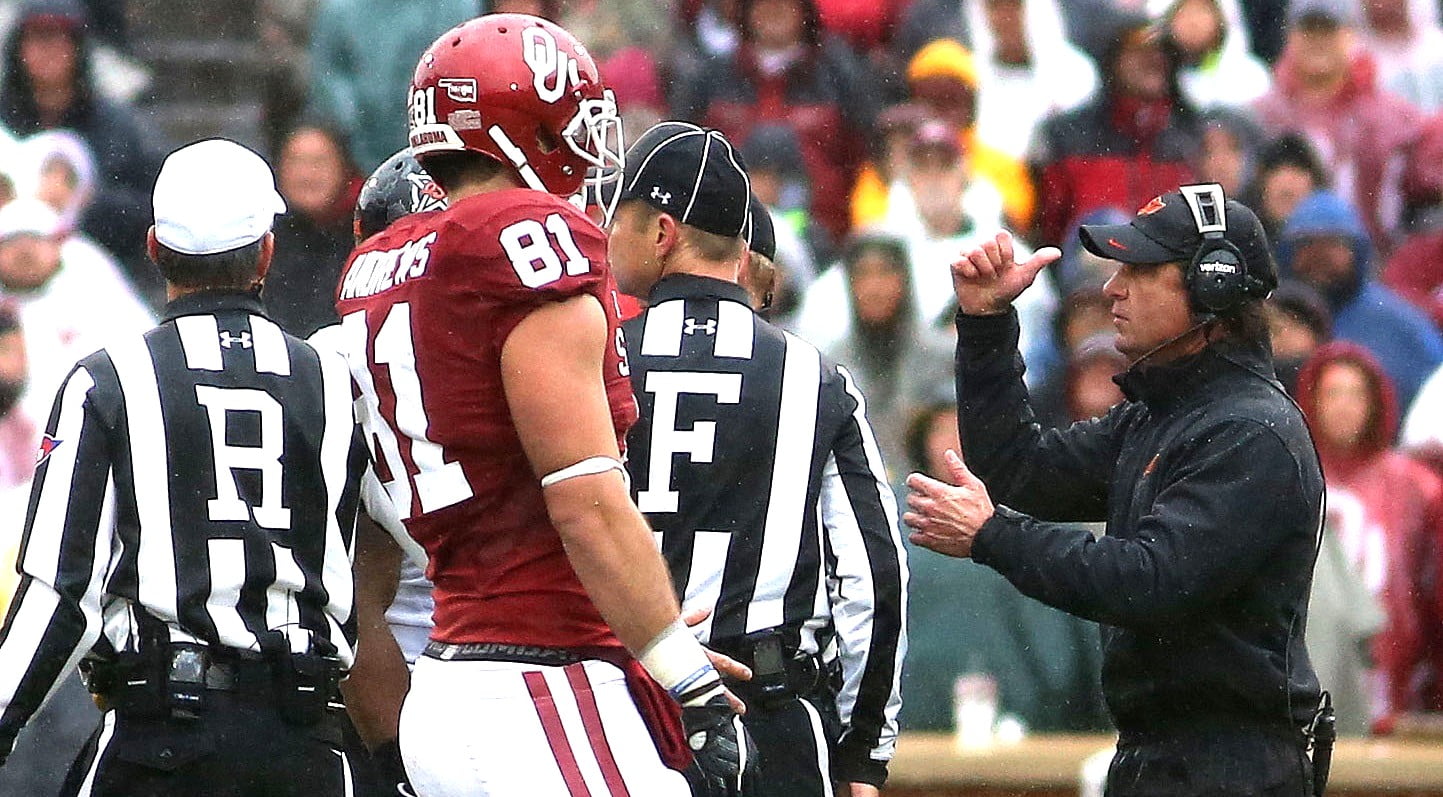 I have been thinking about it for over a day now, and I honestly think my biggest grievance when it comes to Bedlam 2016 of all the grievances is what Mike Gundy didn’t do just before halftime. Standing on the 50 after a long Barry Sanders kick return with 18 seconds left, the ball, and a timeout, OSU ran one play (a handoff) and took it to the locker room.

This is egregious (as I pointed out) but was actually defended by some. Here is Robert Allen of Go Pokes (shocking, I know) on Gundy’s decision at the end of the half.

At the end of the half, Gundy let the clock run out instead of using his final time-out after Sanders had the kickoff return to the 50. I have no problem, it was a long shot at best and without a time-out it would have been hard to get even a field goal out of it. I wouldn’t have trusted Rudolph on a throw to the end zone at that point. However, at the end of the day, you’d probably like to have it back. I just think it was a long shot. [Go Pokes]

I’ll ignore the fact that OSU actually did have a timeout (according to TV broadcast). This is a master class in missing the point. It doesn’t really matter if you hit on the FG or touchdown. There is a small chance of getting the FG (although grabbing 20 yards in 18 seconds with a TO in your pocket doesn’t seem insurmountable) and an even smaller one of getting the TD. I get that.

That’s not even close to the crux of the matter, though. Gundy tucking his mullet and running to the locker room is less about points and more about what you’re telling your team.

That was the message. That was the message all day. What was the downside here? It’s not as if you were backed up on your own five-yard-line. As Berry Tramel pointed out in his excellent column on Gundy’s overall conservative attitude, Gundy’s explanation about what happened might be worse than what actually happened.

“We were not having the best of luck throwing the ball downfield accurately, with the way the ball was rotating,” Gundy told the Oklahoman. “Eighteen seconds left at that time. Just didn’t think it would be much of an advantage for us. Long field goal at that time also would not have been the easiest play for us.”

I’ve never gotten real caught up in the whole “Gundy coaches Bedlam scared” bit. I think this is sort of just how he coaches. When is the last time OSU ran a fake punt in any game? A fake field goal? It feels like it’s been since the last time Gundy wore a mullet that Oklahoma State let its cojones hang in a big game.

This works out because OSU has more talent than most teams it plays. It does not work against OU (obviously). I think OU’s talent simply reveals a flaw (if you can even call it that) that is more or less always there for Gundy.

All of that having been said, this non-attempt made no sense to me. There wasn’t even really anything to lose. Gundy presents himself as a gunslinging CEO bold enough to rock hair down his neck, but he’s not bold enough to throw a 20-yard pass to the sideline in a game in which he stands to make a couple hundred thousand dollars in bonus money just for scoring more points than the other team? The logic just does not add up.

There are a number of ways Oklahoma State lost Bedlam — most of them have to do with how poor Mason Rudolph played. But it was this play before halftime and not any decision or indecision Gundy made on the fourth-quarter field goal attempt from Ben Grogan that was the greatest misfire from the head ball coach.

When there’s blood in the water, great coaches sniff it out. The opposite is also true. When you’re bleeding out, your players, coaches and fans know it. We all watched. We know. Gundy knows. Everybody knows. There is no doubt that Gundy was more conservative than a NASCAR watch party on Saturday. It was bad even for him. It was beyond the conservative attitude he normally displays.

And it started right as the first half ended. Oklahoma State would only score three more points after standing on the 50 with 18 seconds left and a conference title in front of them.

“I just feel like we lost our edge,” said safety Jordan Sterns.

“We didn’t have the same enthusiasm as we did in the first half.”