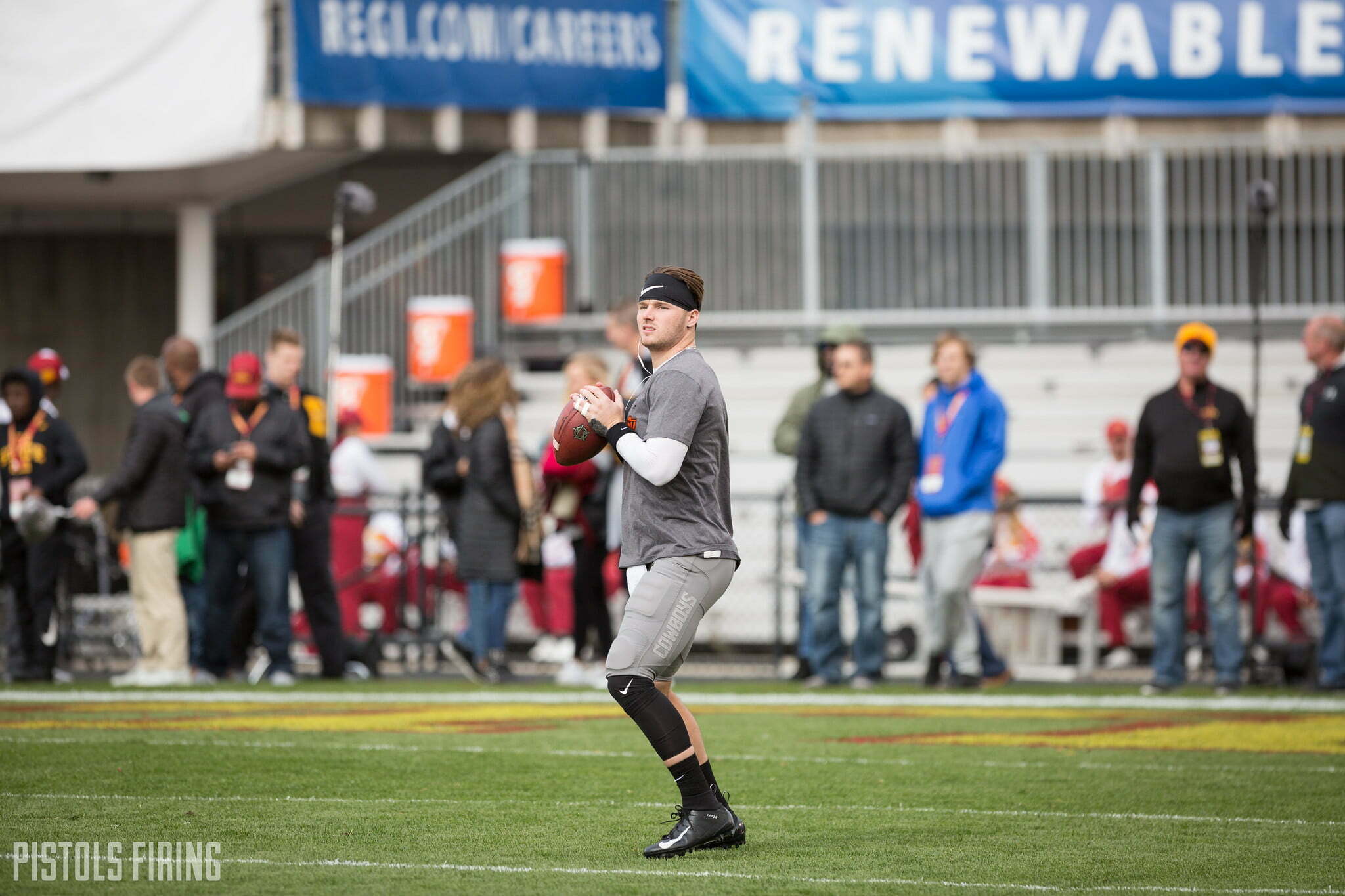 Kickoff is just a few hours away when two opposing QBs will each get their one shot to earn a Bedlam win.

Dru Brown and Jalen Hurts are both graduate transfers and both will get their first taste of this bitter rivalry on Saturday night. That’s about where their similarities end.

Brown has played second fiddle, last year to Taylor Cornelius and this year to Spencer Sanders, since showing up in Stillwater. Hurts was maybe the most sought-after college QB transfer of all time when he took his talents to Norman this year.

Hurts has his team on the precipice of its fifth-straight Big 12 title while Brown starts his second game in the Big 12. The way each passer balls out in primetime will go a long way in deciding which fanbase earns a year’s worth of bragging rights.

So let’s start this off with a lopsided juxtaposition in numbers between Jalen Hurts’ 11 starts and Dru Brown’s one.

These two QBs are in different worlds when it comes to the numbers. It’s almost not fair to include it with Brown playing QB2 until last week’s road game in Morgantown. That was a game where the Cowboys were the clear better team and OSU could lean on its defense to limit an inept Mountaineer offensive attack while Brown played game manager with the ball. There will be no such luxury on Saturday night.

Will One Threat be Enough?

The unfortunate what if about this game is that we won’t get to see what could have been a QB matchup for the ages.

Whether or not Spencer Sanders ends up being great (I still think he will), his injury precluded us from witnessing what could been a great all-time Bedlam between dual-threat passers.

Sure, Spencer will get a couple more shots against OU’s next one-year rental QB, but what Jalen Hurts has accomplished in both the passing and the ground game has been impressive, if not historic.

Mike Gundy called Hurts a one-man show and likened the Sooners playbook to the one Jamelle Hollieway had to study. Many took that as a slight against the Heisman hopeful’s passing prowess, and I’m sure ONE-MAN SHOW has been pinned to more than one bulletin board in Norman. But Gundy meant it as a commendation of Hurts’ strength on the ground and a recognition of what will be the biggest challenge for his improved defense all season.

Hurts isn’t Baker Mayfield or Kyler Murray in the pocket, but with the crimson wizard donning the headset and with homerun threats like CeeDee Lamb at his disposal, he’s leading the Big 12 in passing TDs, is third in the country in passer rating, and he leads the league with his 71.4 completion percentage. Hurts is on pace to set an FBS record currently sitting at 11.8 yards per attempt.

But it’s his impressive usage rate and his ability to punish an opponent’s front seven that worries Gundy.

“So, when you talk about their offense, 449 times he’s had an outcome in the play and 180 of them he was rushing the football,” said Gundy. “It’s triple-option just disguised in the spread is all it is. We gotta stop the quarterback, we gotta tackle him. We gotta get him down.”

A mobile quarterback can lift the games of everyone around him. Someone as dangerous as Hurts and, to a lesser extent Sanders, can cover up a team’s flaws in pass protection and run-blocking and allow a back like Chuba to get free.

In his only full game taking snaps from Dru Brown, Chuba Hubbard recorded just 4 yards per carry, his second-lowest average this season. Twenty-six carries for 106 yards is nothing to scoff at but it’s not a traditional Chuba game.

With the Mountaineers’ defense (which isn’t good by the way) aimed at stopping Chuba from behind the line of scrimmage, Sean Gleeson smartly added a lot more dump-off passes to get his best player in space. That’s a strategy OSU will need to try to implement against OU, but it’s also one that the Sooners’ defense will be ready for.

As Kyle Porter pointed out earlier this week, Brown has one thing going for him. Half of this century’s Bedlam-winning QBs were not the Cowboys’ No. 1 option at the start of the season.

Josh Fields toppled a defending national champ Sooner squad while completing just half of his pass attempts, throwing for 231 yards, one TD and one interception in 2001. Mason Rudolph did it completing 54.3 percent of his throws on 273 and two TDs and a pick in 2014. It doesn’t feel like Brown can afford a similar stat line and earn the victory.

So the Pokes will also need to go deep — both down the field and into their playbook. The truth is, we don’t really know what to expect from Dru. We know he can sling it. He might not have the cannon that Sanders boasts, but this won’t be like the 2015 Bedlam with J.W. Walsh throwing his arm out trying to convince Mike Stoops he can complete a forward pass.

The idea of OSU going conservative in this game would be mind-boggling so I’d expect that kitchen sink game from Gundy and Gleeson. OSU will need help from its defense and for Chuba to do Chuba things. But for the Cowboys to really have a shot at the upset, they’ll need Dru Brown to have the game of his career.