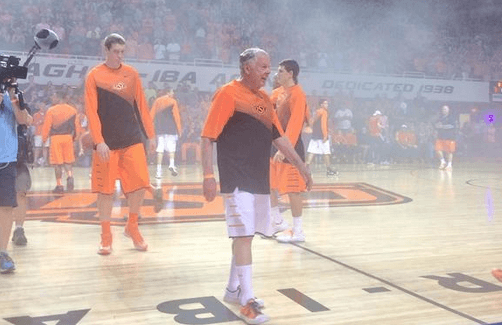 Boone Pickens continues to be nothing but the greatest.

On Friday night he  walked out with the Oklahoma State basketball squad in full attire (shooting shirt and all). Here’s a photo.

Last #OKState player to trot out on the court: @boonepickens. pic.twitter.com/8iCugpu7K2

I think he’s wearing Chuck Taylors. He’s definitely acting like one of the guys.

And here he is with some of the OSU pom squad.

Travis Ford jokingly told the Oklahoman that Boone can play as much as he wants this season.

“Whatever he wants. If he wants to shoot, he can shoot. He can play as many minutes as he wants to play.”

I think he was joking anyway.

Then on Saturday morning Mr. Pickens banged out a few pushups on the ROTC pushup board (an incredibly difficult task, might I add) and fixed ESPNU’s tweet about him.

Maybe he can call plays for the offense?