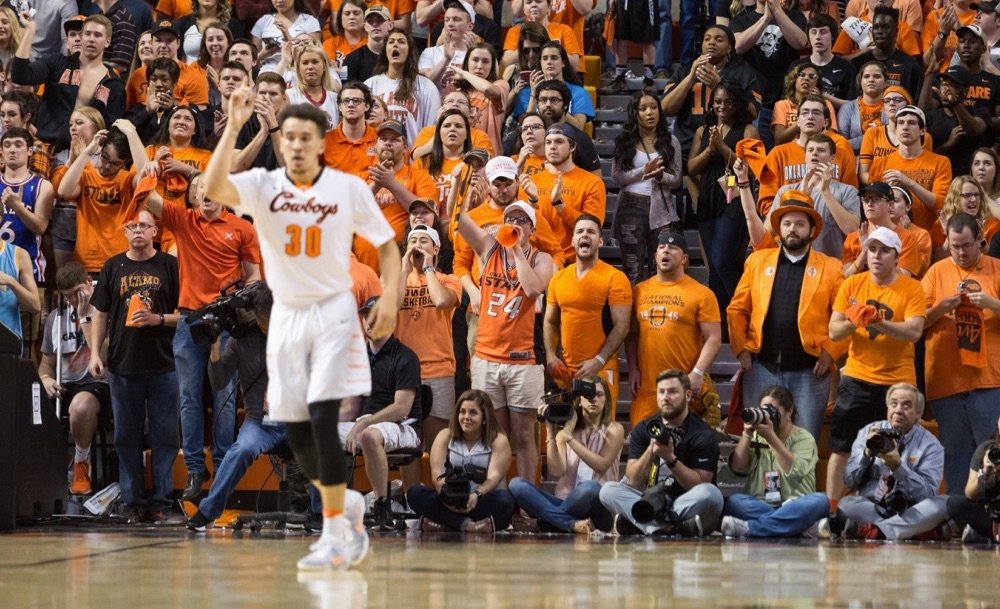 Oklahoma State is poised to potentially grab a 4, 5 or 6-seed in this year’s NCAA Tournament. This sounds unremarkable for a team that should have the expectation of grabbing a 4, 5 or 6-seed annually, but this year is different for a number of reasons. Two stats you should know:

Now it looks like Brad Underwood is about to pull off both feats.

I thought Kyle Cox made a terrific point in his notebook on the Texas Tech game on Saturday. We tend to look at players as unfinished products but not coaches. We view coaches as fully-formed beings reticent to evolve into the next phase of their careers like a Markel Brown or a Jeffrey Carroll.

One of the things that has impressed me most about Underwood this season is his confidence in the culture he is building. He has been preaching culture since Day 1, of course, but my experience with coaches has been that it takes years to even figure out what you want out of a program.

You need to look no further than about 150 yards west of the center of GIA to see that.

Mike Gundy has spent more than a decade building the Oklahoma State football program to an apex it has never before touched for this extended period of time. He has said repeatedly that he struggled to know what mattered in his first three to four years on the job.

The Cowboys head coach has been in charge in Stillwater, Oklahoma, for more than a decade, learning valuable lessons along the way. Patience has become his most valued attribute, allowing him to handle everything from media to replacing coaches to managing 18- to 22-year-olds in a much different fashion than he did in the first few years after he took over Jan. 3, 2005.

“The first three or four years, I let that stuff eat me up,” Gundy said. “I tried to control everything.” [ESPN]

Underwood is still in Year 4 as a hoops coach (albeit at a much more advanced age than Gundy was) and Year 1 in Stillwater. He will get better (he has gotten better) as the years go on.

When somebody says you only won at SFA because it played in a bad conference and you won't be able to coach in the Big 12. pic.twitter.com/orEorezmYN

As for the turnaround, Underwood credits his players.

“A lot of pride,” said Underwood of the turnaround a few weeks ago after OSU clipped TCU in Ft. Worth. “We made some schematic changes, but it’s a lot more about the character of our locker room. That’s pride. That’s caring. That’s leadership by Phil Forte and Leyton Hammonds.

“It would have been really easy after a third of the season just to say, ‘This isn’t going in the right direction.’ Those guys never bought into that. The (defensive) change helped. It’s become something those guys can bite into and really relish.”

And they have. No team in a Power 5 conference can say they have a better record than OSU’s 10-1 mark over the last 11 games. Florida, Arizona and Villanova were all tracking, all three lost one of their last two games.

“I think now we’re starting to feel that we can be great,” said senior guard Jeffrey Carroll after defeating Texas Tech last Saturday. “And we’re just going to keep getting better and better.”

So how do you build a culture like this in such a short amount of time?

“There’s just so much to be said about details,” OSU broadcaster Dave Hunziker told us last week. “There’s a constant emphasis on details. There’s a lot of similarities from Day 1 (to the Eddie Sutton era). If you screw something up in a drill, it doesn’t get glossed over. You have to repeat it and get it right. If you … blow a play, you re-do it and there’s a threat. It’s like, ‘this is how we used to do it.’ And you know what, it worked!

“So we’re back to that again. Attention to detail. Accountability. Putting the team ahead of individuals. Being sound and having a basis in what you do instead of changing game to game. There is a basis. There will be tweaks from game to game … but there is a base for what is done. It’s based on rebounding, defense, the spread-motion offense and getting out in the fast break.

“There are things that are constant. When you add it all up, it’s about details, accountability, being fundamentally sound and holding the players accountable to doing all htose things.”

These words have me crying big, glorious alligator-sized tears of joy for the future of Oklahoma State basketball. Maybe I should let Underwood parent my kids. Accountability! Details! Team > Me.

The transformation is underway in Stillwater, and long-term returns will be immense. The short ones aren’t too bad, either.