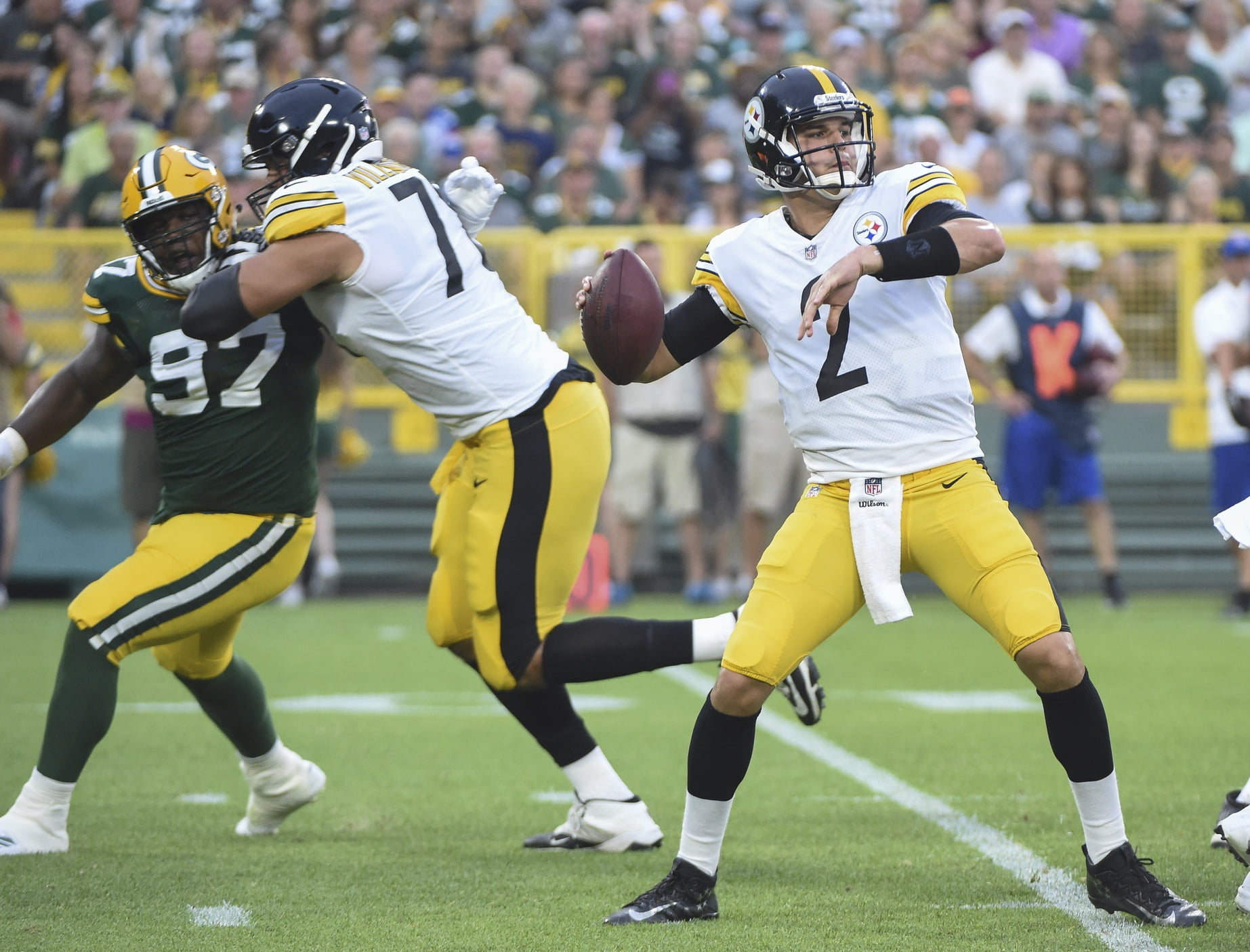 Mason Rudolph had his “welcome to the NFL” moment last night as his first pass in his first career start was a pick-six, a mere 15 seconds into the game.

The former Cowboy quarterback played the entire first half and had a few positive moments, but overall he looked very uncomfortable and a lot like … a rookie. Rudolph finished 5 of 12 for 47 yards along with one touchdown and one interception. He also ran the ball once for three yards, but we will get to that play in a bit.

I wanted to take a look at some of the positive and negative takeaways from Rudolph’s second NFL outing and first career (preseason) start. All of the clips below are from the first half, which Rudolph started and finished before being replaced by Josh Dobbs.

Rudolph’s best throw of the game came on his touchdown pass to JuJu Smith-Schuster. In the clip below you can see Rudolph is standing tall in the pocket, one of the few times he looked really comfortable last night, and he throws a bullet through a tight window to where only Smith-Schuster could make the play.

This is the type of throw that had NFL scouts drooling and gives a taste of what Rudolph can become if he keeps progressing and improving in other areas.

It looks like Rudolph and Smith-Schuster took it from the practice field to the game for this one.

Mason Rudolph and JuJu Smith-Schuster worked that same post route for a touchdown in practice on Tuesday. Plays out live here with Rudolph's first TD toss.

In this next clip, Rudolph has a little trouble with the snap, but he recovers and hits his tight end Jesse James for the big gain. This is great ball placement from Rudolph allowing James to continue his stride and not having to slow down. This play set up the touchdown shown above.

This play also resulted in a…

Now, this next throw isn’t the most beautiful thing I’ve ever seen, but he puts the ball in a spot where the defensive back can’t make a play.  In addition, he made a play starting under center!!

The last positive play I’m going to show is Rudolph’s stiff arm because it was pretty amazing. Whatever his stiff arm rating is in Madden, they are going to have to bump it up a few points after this play.

Not a huge surprise though for Oklahoma State fans, as we’ve seen him use the stiff arm before to create some space.

Well, that was pretty much it from the positive side of things.

Before I get into the negative takeaway, I just want to remind everyone this was Mason’s first career start in the NFL and it’s also preseason. Additionally, he isn’t expected to be the starter this year, so he has plenty of time to learn and grow.

That being said, Rudolph never really settled in against the Packers. He had a few errant passes and stared down his receivers on multiple occasions, which was one of his major criticisms heading into the draft.  Steelers’ head coach Mike Tomlin seemed to think the former Cowboy played “tentatively” and I would have to agree.

Mike Tomlin said at halftime that Mason Rudolph played tentatively but so did the entire offense. He wanted to see him compete instead of trying to be perfect.

In regards to the interception at the beginning of the game, everyone in the entire stadium knew where Rudolph was going with the football. He stared down his receiver, threw the ball late and it resulted in an easy interception for Tramon Williams.

Any time he felt pressure, his footwork went completely out the window, resulting in off target throws. Here you see him step up in the pocket and release the ball from an awkward position which led to a poor pass.

In this video, Rudolph again is staring down his primary receiver and then after he double clutches the football, he sails it over his receiver’s head. His man was covered, but Rudolph still has to give him a chance to make a play. Staring down the receiver was bad, but the hesitation on the throw was almost worse. It got Rudolph off-balance and caused him to throw an inaccurate ball.

Rudolph also did not have great pocket presence in this game. He looked alright with the first team offensive line, as you can see from the positive takeaways above. However, once the starters left the action, Rudolph didn’t have great protection, resulting in erratic footwork and some poor decision-making.

In the video below, you see Rudolph fumble (the third time this preseason) after being hit by a Packers defender. Luckily the Steelers recovered, but Rudolph needs to be able to recognize the blitz and make adjustments. This is something he will learn over time once he gets more acclimated to NFL speed.

This next sack is pretty much all on Rudolph as he holds on to the ball for far too long. This was a problem at times during his career in Stillwater.

All in all, I think Mason will be fine following a bumpy first outing, and I still believe he will have a successful career in the NFL. He has all the tools, he just has to continue working to put them all together.

The Steelers’ used a third round draft pick on Rudolph and think of him as the quarterback of the future, so I don’t think there’s a high likelihood he gets cut.

Although, aside from throwing a pick-six himself, Josh Dobbs played pretty well going 12 of 18 for 192 yards and two touchdowns in his half of play. Landry Jones is almost assuredly the number two on the Pittsburgh depth chart, and I doubt they keep four quarterbacks, so it should get interesting as the preseason continues to unfold.