Shout out to friend of the blog, Steve Savage and his family. Steve, who passed away last week, was an avid reader and a big time OSU fan. Life is short. Do something worthwhile.

Le’Bryan with an unintentionally hilarious statement here: “I’m trying to let the game come to me. I’m not trying to force things, like I did the OU game.

“So I’m trying to let the game come to me, take great shots, play great defense. Sometimes, I want to be more aggressive. Sometimes I want the game to come to me. I’ve got to find it in my team, find it in film.” (NewsOK)

This team isn’t good enough to continually attempt to dig itself out of holes. The Pokes dug a 14-point ditch on the road against Kansas State and is now 0-4 in Big 12 play on the road. (Fox SW)

Forte on the “flopper” chant: “I think it’s funny. I don’t really listen to that. I just try to block it out. They can say whatever, but I try not to let it bother me.” (NewsOK)

In the end the Cowboys missed their leading scorer. Nash finished with 13, with the majority coming in just the last 2-3 minutes of each half. The Pokes just won’t win many games if Nash doesn’t make his presence felt. (CRFF)

Thoughts and notes from the Kansas State game. (PFB)

Travis Ford on the Big 12: “I can’t remember it, in all my years of basketball, anything like this. Playing. Coaching. It’s exciting. I wouldn’t call it fun. It’s interesting. IF you’re a competitor, you like it.There’s nothing like it. It’s crazy. It’s insane.” (NewsOK)

OSU still doesn’t have a third scorer. This isn’t a new issue for OSU, obviously. It’s just alarming that it still exists, this late in the year, with openings so readily available, both in the rotation and on the floor. Says Bruce Weber was going to double Nash and Forte. (NewsOK)

Nash: “To win the Big 12, you’ve got to get road wins. We try to preach that to ourselves every time.” (NewsOK)

Berry Tramel on why the Big 12 isn’t actually that great. KU will win. Again. Groundhog Year. The same thing keeps happening, over and over again. And it’s a sign of the Big 12 hoops’ ill health. (NewsOK)

This is not a thrilling headline regarding Kansas’ freshmen. (Big 12 Sports)

Here are the Big 12 standings: 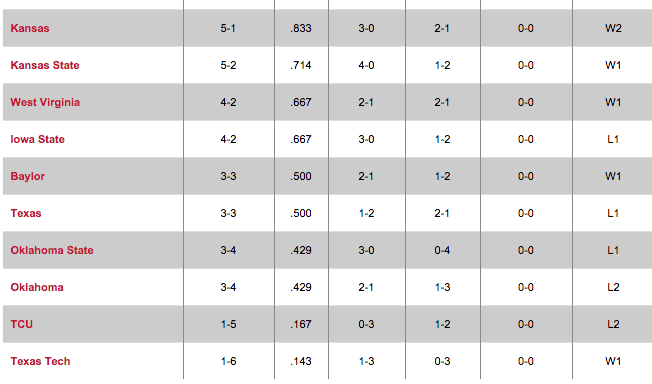 So OSU might already have one of its 2015 running backs. Great post here by Robert Allen. (Scout)

Good look here at how coaches make sure they’re recruiting dudes that won’t embarrass them. Or try to. (NewsOK)

I understand the logic but I think I’m on the side of “hey, the play happened, let’s not act like Tyreek never existed.” (CRFF)

Coastal Carolina is going to have teal turf?! (CBS)

A Cowboys fan is suing the NFL for $88 billion over Dez’s “catch.” (Big Lead)

Two former OSU coaches are probably on the hot seat in 2015. (CBS)

I really enjoyed this from Royce on Scott Brooks being a good coach. I’m not saying it applies to Ford but we’re so quick as a society (shout to Gundy) to lionize someone or immediately write them off. No room for nuance. (Daily Thunder)

OSU split with Mizzou and Iowa State this weekend in wrestling. (okstate)

This dude is insane with a bow and arrow. (FTW)

Messi to Neymar over the weekend was LOL good. (Deadspin)

If you work from home you’ll appreciate this. (Oatmeal)

Bill Nye’s “How I Work” is great. Be very disciplined in the words you use to tell the story. (Lifehacker)

A visualization of population density. (Vox)

The two kinds of hustle. (Godin)

On switching from fast mode to slow mode. I need to do this more often. (99U)