Hoboken Coffee is offering 15 percent off their coffee this week in honor of Rickie Fowler’s Players Championship win. If you buy their coffee (which you should), just go here and use the code ISLANDGREEN when you check out to get the discount.

This on Mike Gundy is so good. (ESPN)

Robert Allen goes a little further and talks about the importance of the quality of coaches Gundy has hired. (Scout)

I did an interview with my friend Pete Mundo on what OSU fans should expect from this upcoming season. (Heartland College Sports)

Wait, so the Cowboys were going to draft a QB but they all went too high? (NewsOK)

This is great. I would pay money to watch Gundy perform in court. Gundy sat for a four-hour deposition on April 22 in which he called Wickline’s move to Texas a “lateral” one. When told of a description of Wickline’s duties at Texas, Gundy said: “He did the same thing at Oklahoma State.” (NewsOK)

You can replace “FSU fans” with “most humans.” (Yahoo)

Personally, I would be shocked if a college football coach got too arrogant in his lust for power and overstepped the bounds of what he should have done in an emotional situation. (Yahoo)

I’m worried that ranking our RBs 7th in the Big 12 is actually overrating them. (ESPN)

We’re going to have somebody with a brother on every lottery team before you know it. (NewsOK)

It sounds like Anthony Grant is going to be a good assistant for the Thunder. I’m glad OSU didn’t hire him now. (NewsOK)

Rickie Fowler is still overrated (and a bunch of other things that stupid poll told means). The comments are are all-time. (CBS) 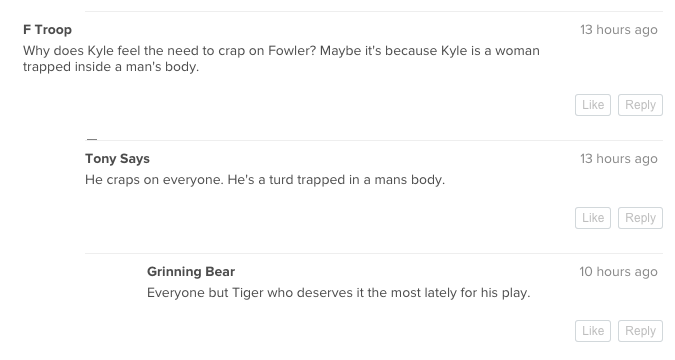 That win, by the way, got a monster rating. (Big Lead)

How to employ Bill Simmons. This is really good. (Deadspin)

Slate is betting big on a podcasting future. (Slate)

This on imperfect substitutes is incredibly good. (Godin)