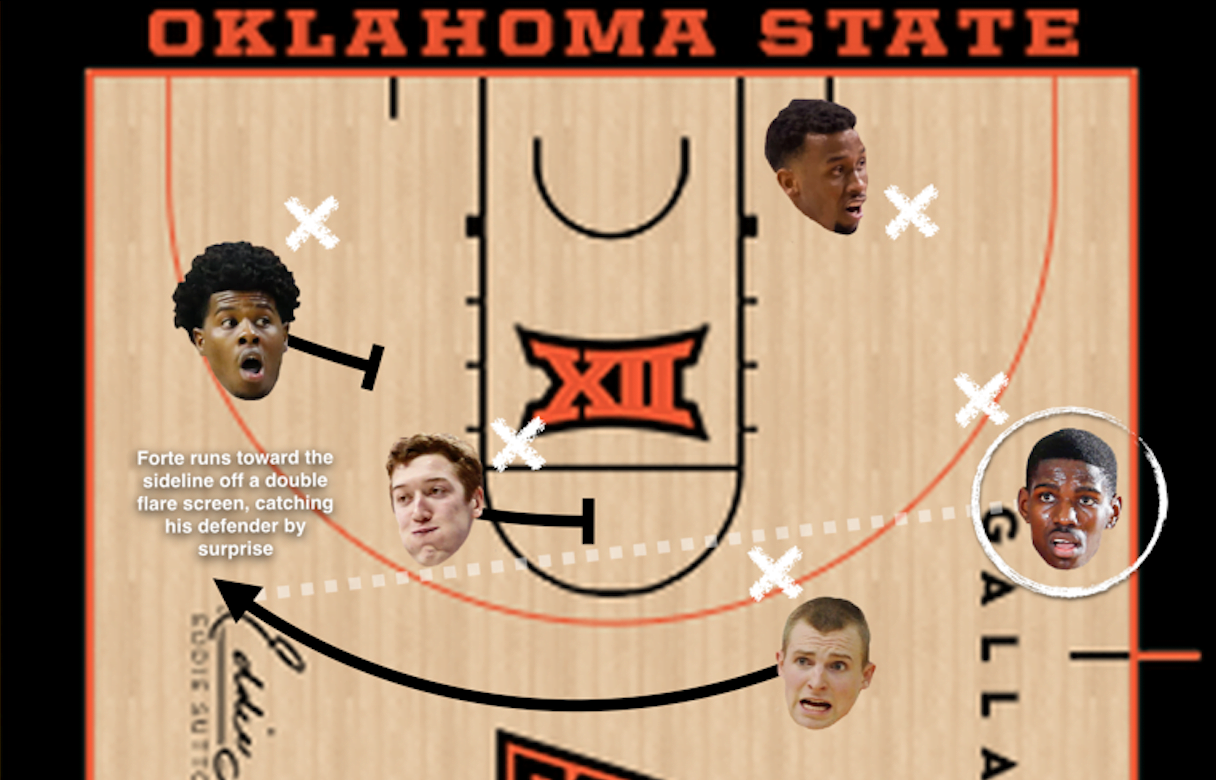 The Oklahoma State Cowboys had a memorable comeback performance in their 96-92 victory over Oklahoma on Saturday, and head coach Brad Underwood showcased his worth as a coach and strategist against the Sooners.

This article will shed some light on how the Cowboys’ first-year head coach played just as big a part in OSU’s win thanks to his offensive expertise. Here are a couple of interesting plays that you might have missed in the euphoria of the Pokes’ victory.

Underwood used a number of plays to get senior sharpshooter Phil Forte open shots, and it paid off. Forte was 7-14 from the field and 4-9 from deep. He scored 22 points.

The first play that Underwood called for Forte used creative misdirection and the incorporation of what’s called a fan screen.

Underwood has been using this play ever since his days at Stephen F. Austin:

Here’s the play diagrammed up: The double screen acts as a decoy, which sets up the screen for Forte. And another example of Underwood’s genius? If it doesn’t work, they’re already positioned in their four-out set and can immediately transition into their motion offense.

For the second play, Underwood pulled out a creative action that not only worked but also kept OSU in the ball game during an OU run.

After the handoff-to-ball screen action, which OSU frequently uses to set up their motion set, Evans gets the ball and the offense seemingly starts the motion. This was a clever action disguised as their spread motion set, and it caught OU by surprise. This is such a good play design because it counters your base offense and takes advantage of a defense that’s trying to anticipate the action.

The third play was yet another intelligent call by Underwood on the first possession of the second half. Underwood knew that the defense would key on Forte, so he called the perfect counter:

Notice how Leyton Hammonds sets a screen for a couple of seconds and slips to the basket before Forte even reaches him. The fact that Underwood knew that OU would focus on his shooters and also knew how to counter that defensive emphasis shows why he’s such a smart offensive mind. Underwood might have received a ton of credit for his in-season adjustment to on defense, but let’s not forget that his offensive coaching ability is just as impressive.

What do you think the Cowboys did well offensively against the Sooners? Leave your messages below in the comments!