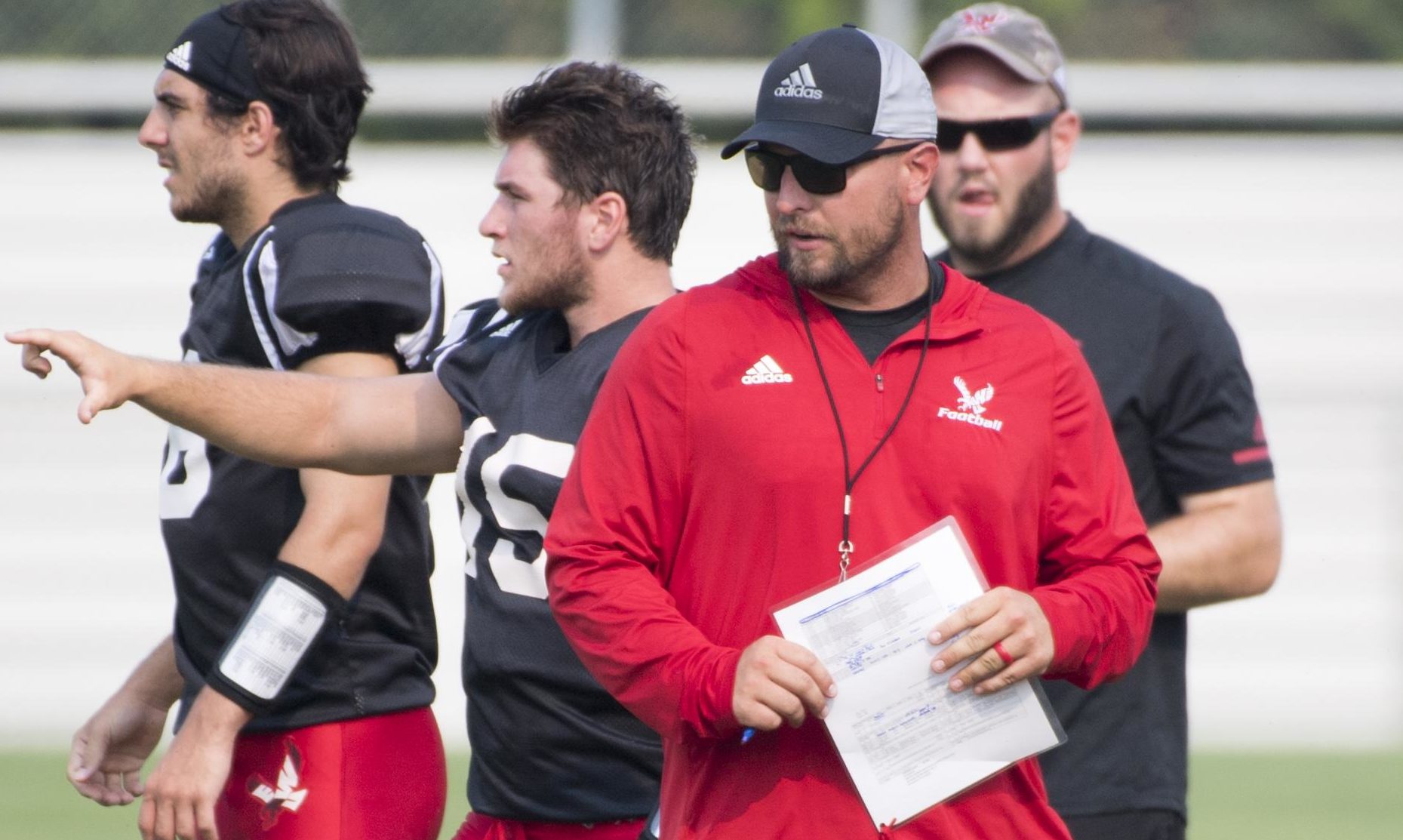 The Oklahoma State Cowboys are hunting for an offensive coordinator for the first time since Todd Monken’s departure prior to the 2013 season. And while fans and media alike are predicting, or calling for, names like Todd Monken, Graham Harrell, Marcus Arroyo or Doug Meacham, there’s one name that’s flying under the radar.

This is not because of a lack of competency, but rather because no one really knows who he is. But current Eastern Washington offensive coordinator Bodie Reeder is not only an excellent fit for the Cowboys but is also one of the best up-and-coming offensive minds in college football.

Reeder checks all the boxes. Connection with the program? Check. He served as an offensive assistant from 2014-2016. Could you get him for cheap, and could you retain him for a couple years? Check. He’s a young coach who would be coming from the FCS, following the precedent Gundy set when he pulled former offensive coordinator Mike Yurcich from Shippensburg.

Additionally, Reeder could coach quarterbacks, and he has proven the ability to develop them at a high level. Look at what he did with third-team All-Big Sky quarterback Eric Barriere, who was thrust into the starting role after All-American senior Gage Gabrud got injured and subsequently had a season-ending injury. The sophomore has excelled as the new starter, posting 2,252 yards and 24 touchdowns. Additionally, Reeder uses him as a dual-threat quarterback, and Barriere has accumulated over 600 yards and seven touchdowns on the ground.

But the most intriguing part of Reeder is his creativity. He’s simply one of the most imaginative coordinators in college football, and just because you haven’t heard of him doesn’t mean it’s not true.

Reeder exhibits his creativity through the Eagles’ run game. He’s a major proponent of GT counter, a play that Lincoln Riley and the Oklahoma Sooners have used to build one of the nation’s most potent rushing attacks.

He runs it in a number of formations and personnel groupings, including through two-back sets (where the “buck” back takes the responsibility of the “wrapper” role):

And with a tight end:

He also dresses the play in a number of different ways. Notice how he used the play in a closed formation with a key screen attached to the wide side of the field, leaving opportunities for a triple option look:

Here’s another example using a jet motion with the counter play:

Or pairing a tight end flat screen with the play, giving it a modern look on the triple option:

Reeder uses the tight ends in a number of different ways, whether it be in the backfield, in the slot or on the line. This would work well with OSU and the Cowboy Back position, which is meant to move around as a utility player.

Look at how he features the tight end in some run-pass options:

Or in the run action game:

Reeder’s offense would also fit the style of a Spencer Sanders or Dru Brown given his use of the quarterback run game, whether it be on an option like the full house veer:

Or as a designed quarterback run, like this swing-sweep combo:

Finally, he knows how to get his playmakers involved. Reeder featured wide receiver Nsimba Webster in a number of different ways this season, which helped the senior record his first 1,000-yard receiving season of his career.

Webster was able to accumulate those yards through the run game, such as this slot RPO:

Quick hitters like the flash sweep (notice the lineman blocking away from the play to hold the linebackers):

In the slot, like the use of five-wide here (he uses quite a bit of empty sets in passing situations):

And on red-zone calls, like this creative play action slide play on the goal line:

Reeder would be such an excellent fit for OSU and this offense. He has experienced Stillwater and the Cowboy culture firsthand, he’s familiar with the coaching staff and could easily make the transition.

In conclusion, big names don’t equate to big production. Additionally, think about what’s most likely. Monken wouldn’t turn down an NFL gig to be a second man in college, Meacham’s discord with Gundy has been documented, Harrell has shown he’s content at UNT after declining the job at North Carolina, and anyone who wants Arroyo for a playcaller clearly hasn’t watched Oregon underperform this year with a future NFL quarterback.

Reeder is a guy who can return to the program, grow with the offense and continue the long line of successful offensive coordinators in Stillwater.