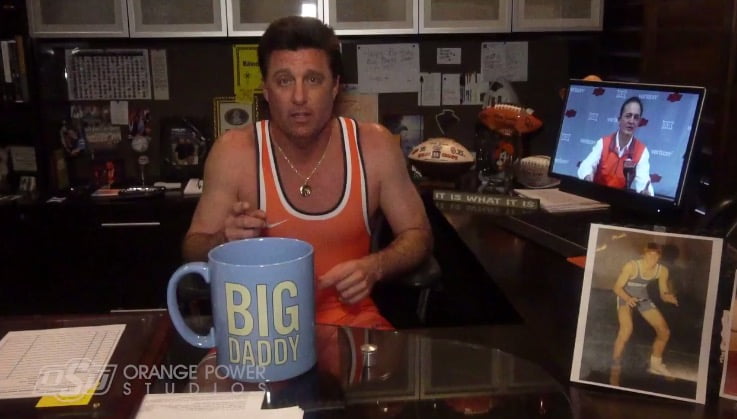 The other guys on PFB know infinitely more about football than I do, but I had an idea for a bit discussing some of the tie-ins with the sport of wrestling and the Cowboy football team. Here it is.

As most of you are aware from the viral video Coach Gundy put out last year, wrestling starts at the very top of the OSU football program. Mike Gundy was a pretty accomplished wrestler as a kid. There are a lot of life lessons learned in wrestling and Gundy has said one of his biggest life lessons came from a junior high wrestling match.

Has Gundy’s ability to hit a good low-single had any real impact on his coaching career? Probably not, but there is a undeniable mental toughness developed in wrestling that translates across just about any avenue in life. Neil Tyson even says wrestling is the toughest thing a person can do.

There will always be criticisms of Gundy, but as a whole he’s built a perennial top 25 program and, as we’ve seen, there are a lot of other programs that like what Gundy brings to the table. A number of those characteristics came from his upbringing, but I can assure you that he, and just about any other former wrestler, will tell you they learned a few lessons from the sport that they apply daily to their personal/professional lives.

The other side of this connection includes the guys actually on the field who have also spent time on the mat — and the two translate to each other.

Gundy likes recruiting wrestlers. He mentioned as much when discussing last year’s recruiting class which included a number of wrestlers.

“I’m a big fan of wrestlers,” said Gundy “a sport that takes discipline, accountability, structure. When you’re out there on the mat, can’t blame anybody else. You’re on your own.”

The mental/attitude stuff Gundy talks about can be applied to any position in football, but fundamentally wrestling applies pretty directly to the offensive line and any defensive position.

One of the first moves you’re taught in youth wrestling is a double leg. A double leg is essentially a good form tackle. If you’re watching a good high school or college match it probably looks a lot different because of all the hand fighting, setups, and defense. But at its core that is what a double leg is. Naturally, wrestlers know that and also know how to take a guy down, which is really beneficial in football.

You can really spot a wrestler’s advantage in the trenches. The hand fighting, the footwork, the ability to create angles to get by people all give wrestlers on the offensive/defensive line an advantage.

This is why you see guys like Kelly Greg, who are incredibly undersized, carve out long NFL careers; Why Steve Mocco was able to play football at OSU for a year after wrestling even though he’d never played football in his life. It’s why Stephen Neal carved out a 10-year career in the NFL and won 3 Super Bowl rings with the Patriots even though he was a wrestler that hadn’t played football since high school. You could really go on all day about guys that had solid NFL careers with wrestling backgrounds.

With all of that said there are quite a few wrestlers in the OSU program, but two freshmen last year that stand out are three-time state champion Brock Martin and two-time champ Malcolm Rodriguez. My advice is to watch out for them both.

John Helsley noted early in the season and before his injury that Martin looked like the best freshman on the team and was ready to contribute on the D-Line.

Many look good, but Brock Martin, at that position so soon is impressive. Strength and wrestler hands, leverage help him shed blocks. https://t.co/laXAbHak5V

Martin is a good athlete, but D-line is a place where guys usually have to mature physically first before they can contribute. He wasn’t ready to play because he could matchup and physically beat guys that were 3-4 years older than him. He was ready because he’d wrestled most of his life and knows how to use it to get past blocks and make tackles. If his injury doesn’t slow him down I’d expect him to impress next year.

Malcolm Rodriguez, the two-way Wagoner product, only held offers from Oklahoma State and Wyoming. But Gundy and Co. liked what they saw from him at safety and a big part of that was due to his background in wrestling. I can almost guarantee that barring injury he will out-perform what most recruiting services projected him to do and should end up being better than a lot of guys that were recruited over him.

Rodriguez only played in eight games and he had more tackles than all but one person on the roster that logged as many appearances. With the loss of four safeties after 2017 to exhausted eligibility, Rodriguez should be leaned on to contribute even more as a sophomore. I’m going to step out on a limb and say he’ll do really well, and his wrestling background will play a role.