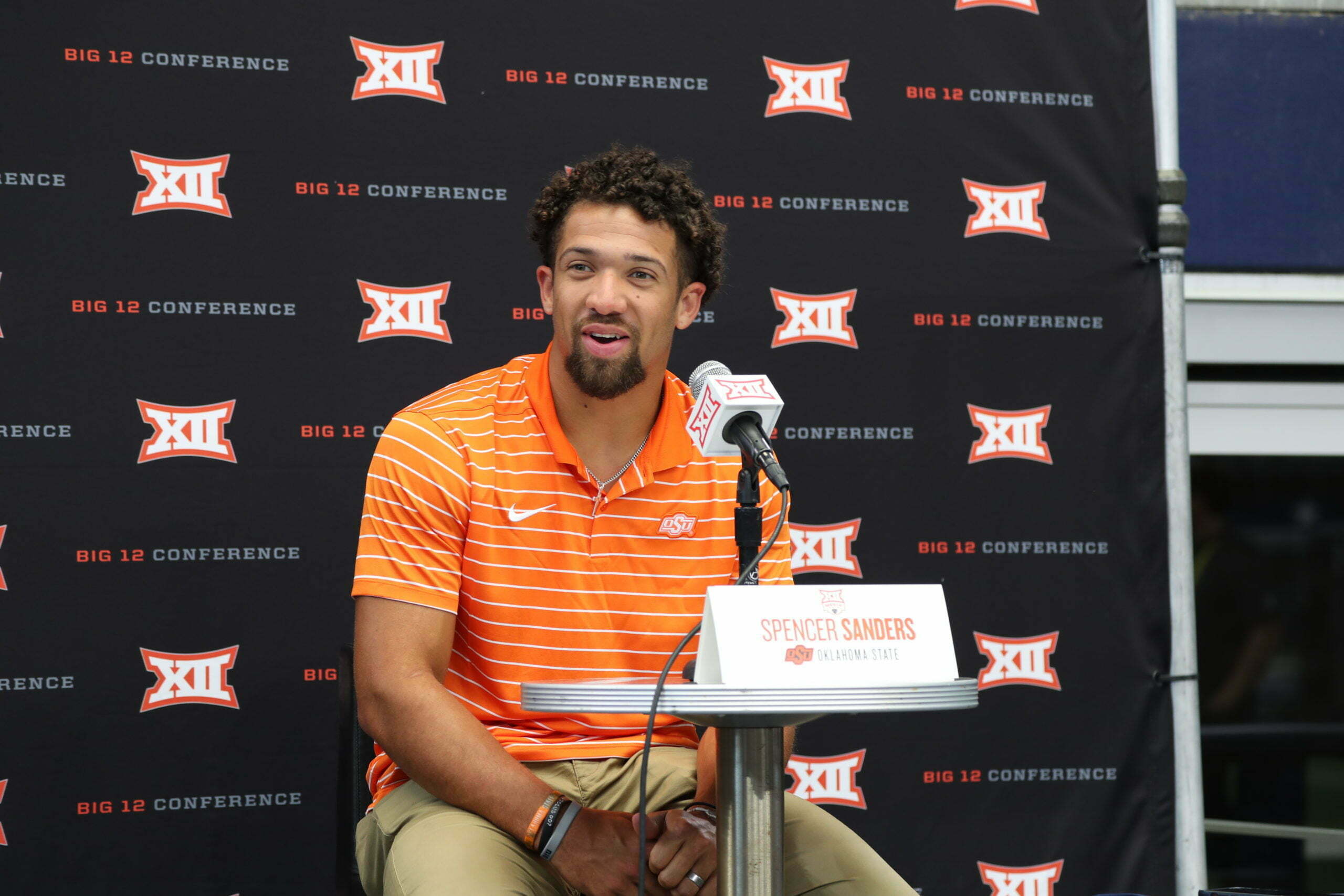 His coach has referred to Sanders as the Tasmanian Devil, so it makes sense, but there were signs at the end of the Cowboys’ stellar 2022 campaign that backed it up.

For most of two quarters in January’s Fiesta Bowl, the Cowboys offense wasn’t in a good spot. But, down 28-7 with 1:16 left in the first half, Sanders was let free. He led a 37-second touchdown drive, and the Cowboys scored 17 points in the third quarter to complete a 21-point comeback. He finished the game with 371 passing yards, 125 rushing yards and four touchdowns.

OSU spent much of 2021 playing controlled and relying on its defense, but when forced into tempo for the comeback, Sanders’ played spectacularly.

“I like playing with tempo,” Sanders said at Wednesday’s Big 12 Media Days. “I like the defense on their heels. I like to keep them guessing. The more I keep you guessing, the more I can keep [you] on your heels. You don’t know what to call. You don’t know what to say. The better I can keep you, just edgy, you gotta make quick play calls because I can move the offense pretty fast, so as long as we can keep moving pretty fast, you gotta get that people out there pretty quick. Then sometimes it’s not always right, and then we get the coverage we want and we throw touchdown for 60 yards. Playing with tempo definitely has an advantage. I hope we can play with a lot more tempo this season, and I’m pretty excited because I feel as if we are.”

A few weeks back, Mike Gundy predicted the Big 12 would return to it’s offensive roots in 2022 because of some coaching hires throughout the league. Gundy said Wednesday that he always wants to play fast, but it wasn’t in the cards at times last season because of the Cowboys’ youth at wide receiver. OSU had four true freshmen getting regular reps at wideout, but those young pups enter their sophomore seasons in 2022 with a lot of experience.

“If we have the luxury of being mature enough and talented and athletic enough, we’ll play fast all the time,” Gundy said.

One would think a quarterback could be less effective if things are hurried, having to make decisions in a shorter window. But, Sanders said his experience in the offense helps in that aspect. Gundy dittoed that point, saying Sanders knows what OSU wants to do better than a given defense knows what it wants to do to stop the Cowboys, so with less time for the defense to react, Sanders is able to manipulate things in his favor.

Gundy called Sanders a “magician” Wednesday. The All-Big 12 preseason quarterback selection, Sanders could be in for a big season so long as he stays healthy and the Pokes’ offensive line holds up.

“I’ve been in this offense for four years, so I’m pretty comfortable with the playbook,” Sanders said. “When something kind of comes at me from the playbook, I kind of know it very well. The faster I get it knowing that, the faster I could run that, and the faster I can run that, is the faster I can set up the offense. It’s about timing with the defense. We can get in a formation and have a play ran within four seconds. That’s hard for a defensive coordinator to call plays on that. It creates holes. It creates things that we need.”